I have made my thoughts known about what I think of so-called “centrists”……not a big fan of the term…but for those that missed my past posts…..

As an example I will use the civil rights fight John Clyburn (this will get me into trouble for attacking an icon like him)….this is about bowing to cash in opposition to progress……

James Clyburn is a Dixiecrat on almost every issue except segregation, and even then he repeatedly chided the Civil Rights Movement for “going too far.” His pivotal endorsement of Obama said more about Obama’s real political character than Clyburn’s. But say this for the Dixiecrats of old, they based their politics largely on conviction, debased convictions to be sure. Clyburn follows the money (He’s pocketed more than $1 million from the health “care” lobby alone). He is one of the premier transactional politicians of our time, a contract killer hired to protect the agenda of corporate America.
(Jeffery St. Clair)

He is an example and by NO MEANS a solitary figure….this is how progress comes to a halt….bowing to cash and lobbyist.
Cash buys even civil rights icons….so how can we get anything done in the nation?
When will this era of buying government come to an end?
To answer my own question….since I am an old fart….not in my lifetime….greed is more powerful than  allegiance to country and its people.
This has to end.
We need dedicated representatives….not toadies standing in the payday line at lobbying firms.
But that is a pipe dream as long as dark money is throwing in the direction of our politicians….federal funding is the answer.
Corporation can give all they desire but t would go into a fund and not in the pockets of individuals….
Money has given rise to the idiocy of today…..and only the loss of that cash will stop the spread of the political cancer we are suffering with now.

A complaint filed Thursday with the Federal Election Commission accuses 18 super PACs—which dumped over $200 million into races from 2017 to 2020—of deliberately misleading voters by concealing their connections to the major party political action committees that financed them.

“Voters have a right to know when big money is flowing into their elections from D.C.-based groups hiding their agendas and funding behind fake names,” said Adav Noti, senior director of trial litigation and chief of staff at Campaign Legal Center (CLC) Action, and former associate general counsel of the FEC, in a statement.

“The vast scope of this illegal concealment should prompt swift investigation and a firm crackdown by the FEC,” he added.

https://www.commondreams.org/news/2021/07/15/targeting-dark-money-attacking-democracy-watchdog-files-fec-complaint-against-23
Even Progressives are not at all pleased with the antics of these Centrists….

House Democrats from both sides of the political spectrum are finding it hard to contain their annoyance at their 10 colleagues threatening to topple President Joe Biden’s entire agenda — for no real reason.

The centrist group claims that Americans can’t wait a moment longer for the hard infrastructure upgrades, and that the bipartisan bill shouldn’t be used as a “political football.”

https://talkingpointsmemo.com/news/house-democrats-infrastructure-centrist-bipartisan
I have been told by friends that I may be a bit too hard on the Centrists (Moderates)….but his says I am not…..

With Democrats clinging to just an eight-seat majority in the House of Representatives, even a small number of defectors can hold up the party’s legislative agenda. That reality was on vivid display last week, when nine moderate Democrats threatened to vote no on moving forward with Democrats’ $3.5 trillion budget resolution unless the House first voted to pass the Senate’s bipartisan $1 trillion infrastructure package.

https://fivethirtyeight.com/features/what-drove-9-moderate-house-democrats-to-hold-up-their-partys-agenda/
We need a government of the best people….not the best people money can buy….and Centrists are owned by the dollars from Lobbyists and corporations.
In this political climate in the US Centrists are holding Progress up because they are paid to do just that.
As my earlier posts prove just how pathetic these people are…..and how the nation needs reps with balls and not those that worship money.
Why are Dems so ineffectual?
Easy answer…. 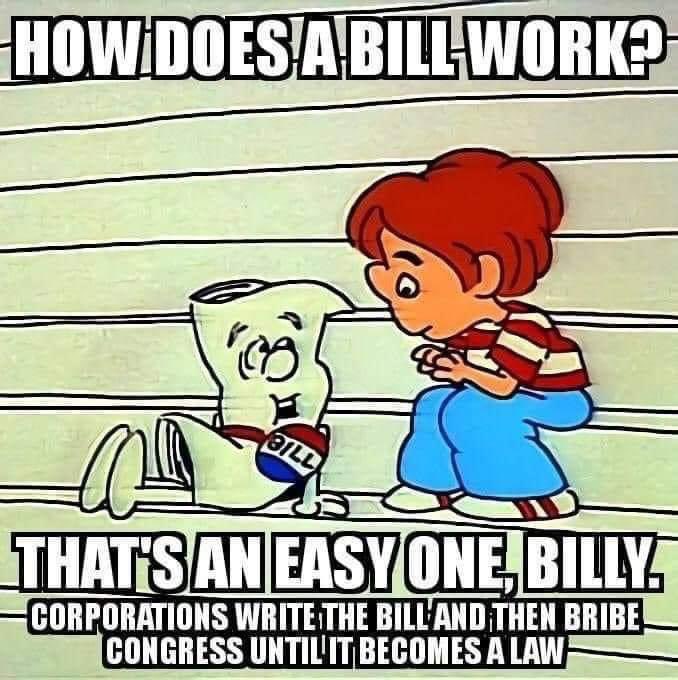 It is just that easy to explain.
I Read, I Write, You Know
“lego ergo scribo”
Advertisement

7 thoughts on “What To Expect From Centrists”