An unusual turn around the insurrection of 06 January…..one Congressman sues another over the action…..

Rep. Eric Swalwell, a Democrat, filed a lawsuit in March accusing former President Trump and his allies, including Donald Trump Jr. and Rudy Giuliani, of inciting the January 6 mob attack on the US Capitol. Now, Swalwell has finally served the last person named in the suit—his fellow congressman, Rep. Mo Brooks, a Republican, the Hill reports. It’s apparently been quite a feat trying to get him served, and Brooks claims Swalwell’s people broke the law when they finally managed to do so. He tweeted an accusation that they snuck into his house and “accosted” his wife, an allegation Swalwell’s attorney swiftly denied to CNN.

“No one entered or even attempted to enter the Brooks’ house,” he says. “A process server lawfully served the papers on Mo Brooks’ wife, as the federal rules allow. This was after her initial efforts to avoid service. Mo Brooks has no one but himself to blame for the fact that it came to this. We asked him to waive service, we offered to meet him at a place of his choosing. Instead of working things out like a civilized person, he engaged in a juvenile game of Twitter trolling over the past few days and continued to evade service. He demanded that we serve him. We did just that.” Brooks responded to that on Twitter by claiming home security video will prove him right, and that he’ll be seeking an arrest warrant.

Glad to see someone in DC has stepped up and attempted to make those who incited the rabid crowd to breach the Capitol.

There needs more actions to make the mouthpieces of the insurrection to be held responsible for their part in the breach.

Most my readers do not care what these mental midgets think….but it is interesting to see just what a clown show this group of slugs truly are and continue to feed the bullshit.

This is a disturbing although predictable poll numbers….

Fifteen percent of Americans agree with the central false tenet of the QAnon conspiracy theory: that the government and other entities are controlled by Satan-worshipping pedophiles running a child sex trafficking ring, according to a new poll.

Among Republicans the survey, released Wednesday by the Public Religion Research Institute, found that 23 percent of respondents agreed with the statement that “the government, media and financial worlds in the U.S. are controlled by a group of Satan-worshipping pedophiles who run a global child sex trafficking operation.”

We have been told by the other guy that use to be president that he will be ‘reinstated’ as president in August of this year…..there is even a QAnon supporter that says she can time travel (and you think these dullards are rational)….

A QAnon adherent who claims she can time travel is whipping up her thousands of followers to carry out a plot to oust elected officials in the U.S. and replace them with QAnon followers, VICE News reports.

After months of building a network of groups in all 50 states, Terpsichore Maras-Lindeman promised her followers that “retribution” is coming for what she says was the stolen 2020 election. She also claims Donald Trump will be reinstated into office.

“Maras-Lindeman is part of a growing ecosystem of grifters and hucksters who are leveraging the widespread belief that Trump’s election loss was somehow orchestrated by shadowy figures and companies tied to the Democrats,” VICE News reports. “This so-called ‘Big Lie’ has taken hold within the mainstream Republican Party, and fringe figures like Maras-Lindeman have succeeded in carving out a niche that’s proving to be highly lucrative.”

There is am power struggle happening within the ranks of QAnon…..and the anti-Semites are taking control…..

Vice, reporter David Gilbert analyzed how the “grifter influencers” at the top of the QAnon conspiracy theory movement are scrambling as a new wave of anti-Semitism hijacks their movement.

QAnon, the pro-Trump movement that has claimed the former president is fighting a cabal of Satanic child-eating pedophiles that control the United States, has always borrowed from anti-Semitic tropes of blood libel. But, Gilbert writes, things have reached a new stage, with one specific account leading the charge.

“There is a war brewing within the QAnon community,” wrote GIlbert. “One one side you have an upstart anonymous account called GhostEzra who has amassed a massive following in the space of a few months by spreading wild claims about President Joe Biden being a fake played by Hollywood star James Woods in a mask. In recent weeks, the account has become more and more extreme, spreading Holocaust denial and neo-Nazi content.”

QAnon is a clown show and like all clowns there is a struggle for dominance in the circus of the absurd.

The basic right within this democratic process is the right to vote….and there seems to be an all out assault on that right.

A majority of states have tried to enact statues that would seriously limit the access to a voting location….even to make it illegal to give water to those standing in the long lines to vote….

So my thought is that this is an assault on the very foundation of this country….

How did it come to this?

A Reuters/Ipsos poll released in April 2021 indicates that a majority of Republicans feel that the presidential election was stolen from Donald Trump. On January 6, when Congress convened to count and certify the electoral votes, 147 Republican members of the House of Representative voted against certification even after a mob had taken over the U.S. Capitol. This is unprecedented. Never before has a major political party rejected the results of a presidential election. What caused this phenomenon? When and how did forces come together resulting in an attack on democracy by a major political party?

American history is replete with presidential elections that could have been justifiably challenged. Many times results have been less than clear-cut and controversial. Before the 12th Amendment each elector would cast two votes. The candidate with the most votes became president and the runner-up vice-president. In the 1800 election, Jefferson and Burr, the Democratic Republicans, tied for first. It was left to the House of Representatives controlled by the Federalists to decide whether Jefferson or Burr would be president. They chose Jefferson, who was then accepted by all sides as our third president. Today it would be inconceivable for a Republican Congress to decide which Democrat is elected president. But that happened in 1800 as the Federalists accepted the Electoral College system as prescribed by the Founding Fathers.

All this assault brings into question whether the foundational right of this country is in jeopardy….

Do not overlook the process known as gerrymandering…..which will begin soon….that is when politicians pick their voters and not the reverse.

Democracy may well be dead!

n the wake of the bloody insurrection at the Capitol on January 6, one question lingered along with the stench of tear gas and bear spray — was that abomination a one-off, or was it in fact the start of something new, something far more ominous? In the aftermath of the January 6 attack I gave my own guess in an article called “Trump’s Storm Troopers: First Blood.” “Stay tuned,” I advised. “This is just the beginning.”

Now, five months out, we can see the larger pattern that is forming. The United States is being threatened from within as it has not been since the Civil War. We are once again becoming a nation divided, with family members pitted against each in bitter recrimination. The new Mason-Dixon Line can be almost anything — a MAGA hat, a Black Lives Matter sign, an absentee ballot. Suspicions over COVID-19, masking, and vaccinations simply followed the fault lines already laid bare by the last election, to the point where the pandemic itself became political. The country now seems in gridlock, with a third of the population determined to continue fighting the last election.

You have taken your democratic rights for granted…..and now  you are witnessing the slow process of the loss of those rights. 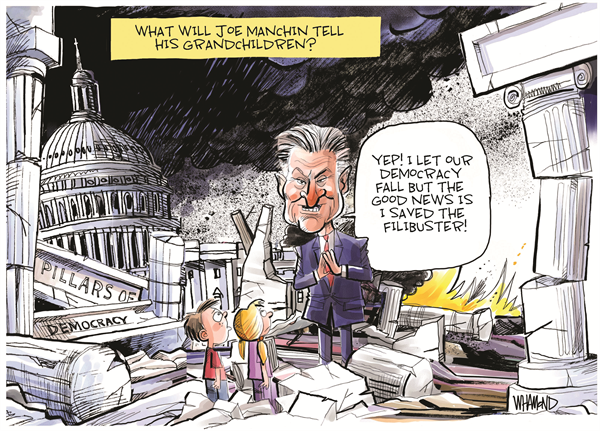 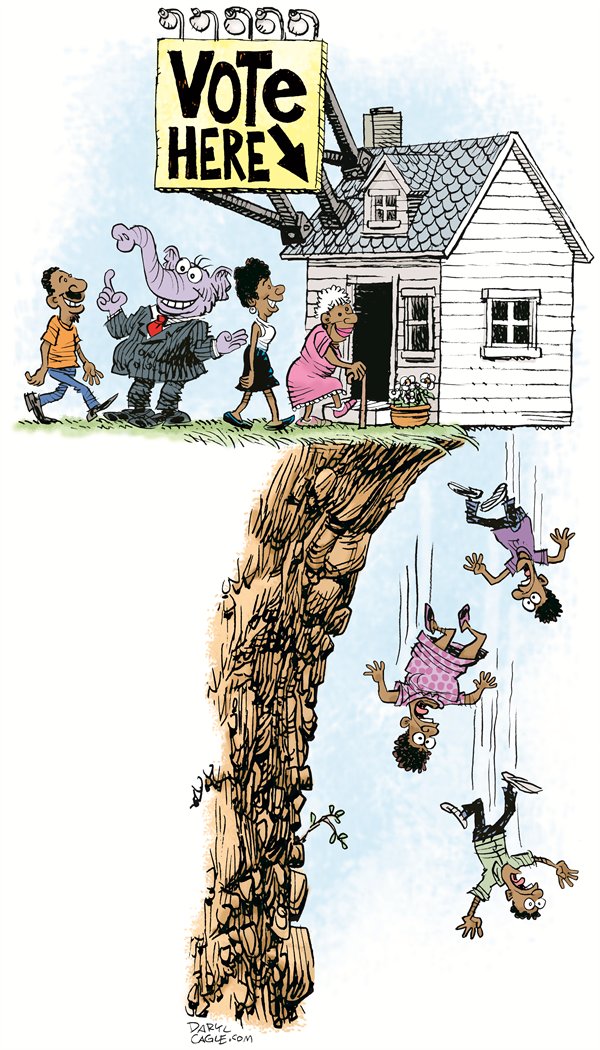 Sadly Americans are sitting by a waiting for all this silliness to pass…..and then it will be too late…..and YOU will be to blame!

Democracy is not dead….but it is walking with a limp.