After the coup attempt on 06 January 2021 have you ever wondered where these groups and ‘groups’ I mean those mental midgets in our government, get their cash?

I may have an answer for you.

After a brief lull in political spending following the January 6 insurrection, military contractors are ramping up PAC donations to members of Congress on committees with influence over the distribution of Pentagon funds, including dozens of GOP lawmakers who voted to overturn the 2020 presidential election results.

In the wake of former President Donald Trump’s failed coup attempt, “nearly every major defense firm paused political contributions… and many expressed disgust at the sight of rioters storming the Capitol,” The Hill reported Thursday.

BAE Systems described the incident as “deeply disturbing,” and Boeing denounced the “violence, lawlessness, and destruction” that transpired.

Despite their professed aversion to the right-wing attack on the halls of Congress and vows to suspend donations to anti-democratic politicians, The Hill noted, BAE Systems, Boeing, General Dynamics, Leidos, Lockheed Martin, and Northrop Grumman “have quietly resumed” political giving to Republicans who—just hours after the deadly mayhem on Jan. 6—objected to the certification of President Joe Biden’s Electoral College victory.

In May, weapons manufacturers even increased their spending on the GOP lawmakers who abetted the insurrection, the news outlet reported. Raytheon is alone among top U.S. military contractors in maintaining its pause on PAC donations.

It is far more important to buy the loyalty of the spineless cowards in Congress than to protect the republic that gives them a virtual free ride. 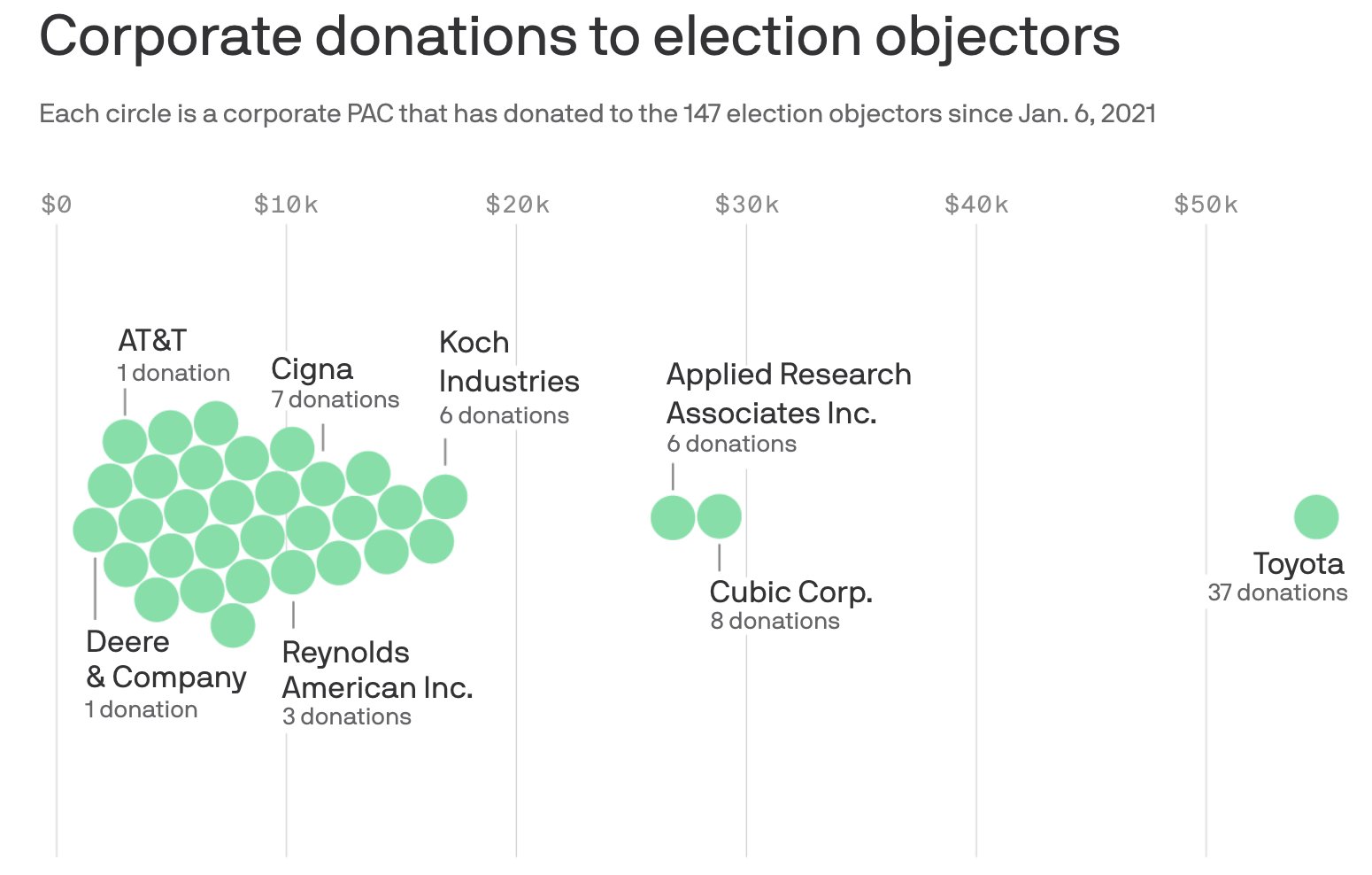 When will the American people wake up and smell the manure in Congress….and some of that manure is trying for a re-election….

Vote these lumps of fecal matter out of government.

I have always hated it when politician use the Constitution as a prop in their campaigns….most pick and choose what parts they want to use and most times they are off base completely….I am talking about both idiot parties here….their ignorance knows NO political affiliation.

Let me begin with some of the most recent moronic babblings……

Sen. Ted Cruz (R-TX) is proposing a new bill that would require the censorship of all public schools in the teaching of any kind of American history involving slavery.

While it appears Ted Cruz was endeavoring to ban the teaching of critical race theory, what he has inadvertently done is bar the teaching of several amendments of the Constitution.

President Abraham Lincoln’s effort to abolish slavery with the 13th Amendment would cause problems since it directly addresses the history of U.S. slavery that was abolished by the new law. Cruz’s censorship bill would effectively bar the teaching of that as well as the 14th Amendment, which made it so any person born in the United States a citizen of the United States. It also said that no person can be denied life, liberty or property. Teaching it would likely require educators to explain why that amendment came about, which would be censored by Cruz’s bill.

Even a politician with 50 years of legislative experience is not immune to making stupid assertions…..

This time is the president old Uncle Joe Biden……

President Biden claimed last week that the Second Amendment, “from the day it was passed,” limited what kind of weapon you could own and that “you couldn’t buy a cannon.” Biden has made this claim before, but historians and fact-checkers including Glenn Kessler at the Washington Post say it’s bunk. Historians say there are no documented instances of a private individual in the era being prohibited from owning a cannon, and Kessler notes that the Constitution granted Congress the power to allow private individuals to act as pirates—which would certainly have included owning cannons—on behalf of the US. PolitiFact deemed the claim false when Biden made it on the campaign trail, and Kessler gives Biden four Pinocchios, the highest on its scale for misleading claims.

Biden may have meant to say that the amendment “was never understood to guarantee everyone the right to own all types of weapons, which I believe is true,” says constitutional law professor Kermit Roosevelt. “As phrased, it sounds like the Second Amendment itself limited ownership, which is not true.” Kessler says the error may seem “relatively inconsequential” to some readers, but Biden is undercutting his campaign for tighter gun laws when he makes false claims.

I have been preaching for decades that the people we elect are not those that have the best interest of the country at heart…..ignorance runs deep.

MY continuing series to keep the deeds and the the people involved in the attack on the republic in the minds of my readers.

It seems that ‘titty baby’ that needed a special diet is being handed over for a psych eval…..

The man who wore no shirt, a fur-lined hat with horns, face paint, and carried a spear with a flag on it into the US Capitol Building during the Jan. 6 attack has been ordered to undergo a mental health evaluation. You may know Jacob Anthony Chansley as Jake Angeli or possibly as the QAnon shaman. He’s the one who requested organic food in prison for hard to parse religious beliefs, and has been characterized as having a “detachment from reality” by a DC federal judge. He’s been detained since January, but the exam will take place in a facility in Colorado he’s been housed at since June 10, the Hill reports.

At issue is whether Chansley is competent to stand trial, a question raised by his own lawyer. Albert Watkins, Chansley’s attorney, argued that months in prison have taken a mental health toll, the Washington Post reports. The case’s prosecutors did not raise any objection to the evaluation. This isn’t the first time that Chansley’s lawyer has questioned his client’s faculties. Watkins told Talking Points Memo that his client and some of the other Jan. 6 defendants “are people with brain damage.”

Sounds more like a defense ploy than a fact…..say one is batcrap crazy to avoid being held accountable for his acts.

The first sentence has been handed down for a Capitol attacker….

An Indiana woman on Wednesday became the first defendant to be sentenced in the Jan. 6 insurrection at the US Capitol and avoided time behind bars. And a member of the Oath Keepers extremist group pleaded guilty in a conspiracy case and agreed to cooperate with prosecutors in a major step forward for the massive investigation. The two developments signal that the cases against those charged in the deadly siege are slowly advancing, the AP reports, even as the US Department of Justice and the courthouse in Washington, DC, struggle under the weight of roughly 500 federal arrests across the nation. And it comes as Republicans attempt to play down the violence committed by members of the mob supporting former President Trump. Graydon Young, who was accused alongside 15 other members and associates of the Oath Keepers of conspiring to block the congressional certification of President Biden’s electoral victory, pleaded guilty to two counts: conspiracy and obstruction of an official proceeding.

It was the first guilty plea in the conspiracy case against members of the group. The second charge calls for up to 20 years in prison, but US District Judge Amit Mehta said federal sentencing guidelines call for Young to serve 5¼ to 6½ years. Prosecutors may seek less time in exchange for his cooperation against other defendants. Young, 55, of Englewood, Florida, was arrested in February and charged in the conspiracy case accusing members of the Oath Keepers of coming to Washington prepared to use violence and intent on stopping the certification of the vote. Anna Morgan Lloyd, 49, of Indiana, was ordered by a federal judge to serve three years’ probation, perform 120 hours of community service, and pay $500 in restitution after admitting to unlawfully entering the Capitol. She pleaded guilty to a single misdemeanor charge under a deal with prosecutors. After the riot, Lloyd described Jan. 6 on Facebook as the “best day ever.” On Wednesday, she apologized to the court, her family and “the American people,” saying she went to Washington that day to peacefully show her support for Trump.

Personally I think these are too light.

She deserves to be exposed to the maximum for her actions…..to the point that her penalty follows her for the rest of her and their lives.

“I did nothing wrong”  This seems to be the common defense for those idiots that breached the Capitol…..

A former long-haul truck driver in Washington state facing misdemeanor charges for entering the US Capitol building after marching with the Proud Boys on Jan. 6 said he expects to receive an additional felony charge for lying to the FBI.

Jeff Grace told an FBI agent who interviewed him at his home in Battle Ground, Wash. on Jan. 21 that he and his son, Jeremy, traveled to DC to attend the rally for Donald Trump, but he said the two got separated before he entered the Capitol. Jeff Grace was arrested on Feb. 4, and charged with entering and remaining in a restricted building or grounds, disorderly and disruptive conduct in a restricted building or grounds, disorderly conduct in a Capitol building, and parading, demonstrating or picketing in a Capitol building.

Jeremy Grace was arrested almost four months later, after the FBI retrieved a deleted video in which the father and son can be seen together inside the Capitol.

Maybe these low IQ in-bred dingle berries should have spent more time in school and less time helping their uncle make meth and then they may understand what THEY DID WRONG!

There are those like myself that think the rhetoric and the actions of lawmakers on and around 06 January should be barred from ever holding office again…..

Calling on election officials across the U.S. to recognize that the nation “is at a critical crossroads,” a non-profit legal advocacy group on Tuesday cited the 14th Amendment as it demanded Republicans who aided the January 6 insurrection—including former President Donald Trump—be barred from holding public office in the future.

The democracy watchdog Free Speech for People sent letters to the secretaries of state of all 50 states as part of its 14point3 campaign, calling attention to Section 3 of the 14th Amendment, which states:

I agree….throw the worthless slugs out in the street covered with honey and feathers.

Then there are the warnings from the spineless slugs that support Trump and their ominous words…..

CNN reporter Donie O’Sullivan traveled to former President Donald Trump’s weekend rally in Ohio and spoke to some of his supporters who warned of more violence like that witnessed at the U.S. Capitol on Jan. 6.

In a CNN clip posted to his Twitter page, O’Sullivan interviewed one Trump supporter who was convinced the former president would be reinstated by August. He espoused a fictional conspiracy theory holding that the “military” already knows Trump won the 2020 election by “over 80 percent.”

“He’s coming back,” the supporter said.

“And what if that doesn’t happen?” asked O’Sullivan, pointing out that the Constitution doesn’t have a mechanism to “reinstate” a defeated president.

“We’re gonna be in a civil war,” the supporter said. “Because the militia will be taking over.”

Is there more to come?

I continue to watch these events.