He has left the building…and the fumigation has begun.

AS the Trump imperial presidency draws to a close…..time to look at his final approval rating.

As he gets ready to head out of the Oval Office and back to life as a private citizen, President Trump just received his final report card—and Gallup notes he’s leaving “on a personal low note.” In a survey of 1,023 random American adults taken Jan. 4-15, only 34% gave him a thumbs-up for the job he’s doing, the lowest score of his presidency, and one point lower than the 35% he hit several times in 2017, such as after the deadly white supremacist violence in Charlottesville, Va. The outgoing commander in chief’s overall average approval rating of 41% for his entire presidency is 4 points lower than any other president has received in Gallup’s history. And, in a sign of our polarized times, there was a historic 81-percentage-point average gap—more like a chasm—between Democrats and Republicans; the previous record had been 70 percentage points.

Only Harry Truman left with a lower rating, at 32%. Trump tied with Jimmy Carter and George W. Bush for second lowest. Trump is the only president since the analytics company started registering presidential job approval in 1938 to not get over the 50% hump at any point; a 45% rating during his first year was his best. He did get close in 2020, hitting 49% a few times after his first impeachment but before the pandemic began. What did him in toward the end of his tenure, per Gallup: his refusal to concede the election, the continued COVID death toll, the Jan. 6 Capitol riot, and an unprecedented second impeachment. The numbers are slightly better for him in a final NBC News poll, which surveyed 1,000 registered voters between Jan. 10-13. Trump ends with a 43% approval rating, though nearly half rank him as “definitely worse than most presidents.”

The worse approval since Harry Truman….how pathetic is that?

Say good-bye to inept president….hopefully we can do better with Biden.

A majority of American voters surveyed in the wake of the insurrection at the U.S. Capitol believe that twice-impeached President Donald Trump should be barred from ever running for office again, according to polling results reported exclusively by The Hill on Tuesday, his last full day in office.

The survey was conducted by the Center for American Political Studies at Harvard University and the Harris Poll from January 12 to 14; it found that 57% of U.S. voters think Trump—who entered politics in 2015 to run for president—shouldn’t be allowed to seek office in the future, compared with 43% who don’t support such a ban.

After all the crap in the past 4 years and only 57% is the best we can muster? 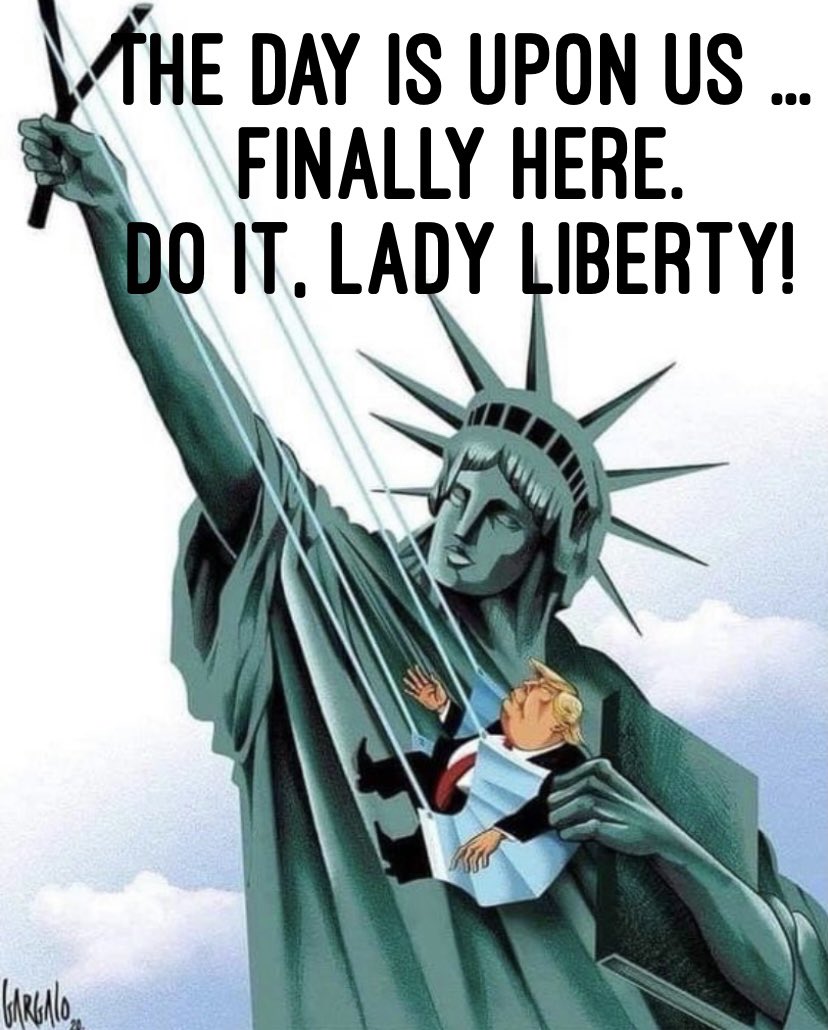 The last day of the Trump debacle that some call a presidency……Donald the Orange has made his list of pardons public.

Pardon day is here. The White House was expected to announce a slew of pardons and commutations on Tuesday, President Trump’s last full day in office, but instead the list came out early Wednesday, hours before his term ends at noon, CNN reports. The most notable name on the list of people being granted clemency in some form: Steve Bannon, the former White House chief strategist charged with fundraising fraud. Sources say there was much debate at the White House over whether to include the controversial pick, even until the last minute. Not on the list: Trump himself, members of his family, or Rudy Giuliani, NBC News reports; there had been speculation he might issue preemptive pardons in those cases. There are a total of 143 names on the list, the Washington Post reports. Among them:

Prior to this group, Trump had only granted clemency to 95 people; the only one-term president to have a lower number is George HW Bush.

Not a person listed deserves a presidential pardon.

If they accept then they admit they committed the crimes they are accused of doing.

These pardons are not about justice but rather about money.

Awhile back the president ordered the ripping up of the White House’s Rose Garden….a feature that has been a stable in DC a place for announcements, pressers and just a great source of inspiration for most of those roses were planted by numerous presidents….

Melania Trump’s redesign of the White House Rose Garden is making headlines—and not all for the better, Vox reports. The First Lady has torn out crabapple trees and vibrant tulips dating back to the Kennedy era for a more sedate color palette of white and pastel roses. She also introduced paved walkways along with under-the-radar fixes like better drainage, disability access, and media-friendly technical improvements, per the AP. But the less colorful design and vanquished trees inspired a wave of outrage on Twitter, where the Independent reports that users accused Trump of “removing Jackie O’s rose garden” and constructing “a cemetery.”

It is now gone and on Trump’s last full day as president he announced that it would now be the “Heroes Garden”…..

President Trump issued one of his final executive orders that calls for the establishment of a “National Garden of American Heroes,” what Business Insider describes as a collection of “statues of an eclectic range of candidates” that Trump first mentioned last summer. (By “eclectic,” think Christopher Columbus set in a landscape alongside Whitney Houston, Kobe Bryant, and Ruth Bader Ginsburg.) But as people have started to analyze the list of nearly 250 luminaries on Trump’s list—which includes athletes, authors, TV and film stars, and historical figures, among others—the garden that’s meant to “reflect the awesome splendor of our country’s timeless exceptionalism” is receiving some criticism for its makeup. Specifically, Axios ran the stats and found that male candidates outnumber the women at a nearly 4-to-1 rate.

Most notably missing: female athletes, Mike Freeman notes for USA Today. Not a single one, though Muhammad Ali, Jackie Robinson, and Babe Ruth all get a nod, as well as 10 other male athletes and coaches. “An argument could be made that Serena Williams is the greatest athlete this country’s ever produced,” Freeman writes, also scratching his head over why Billie Jean King, Martina Navratilova, Simone Biles, Megan Rapinoe, and others weren’t possibilities. Historian Michael Beschloss thinks the entire garden is a terrible idea, telling Axios: “No president of the United States or federal government has any business dictating [to] us citizens who our historical heroes should be.” Where the statue garden would be located hasn’t yet been mentioned, but NPR notes it may all be a moot point anyway, as it doesn’t see the garden ever coming to fruition. Read the full list of candidates here.

I still do not know why the roses had to go.

Time to replant and continue a tradition…..a tribute to real ‘heroes’ is a good idea but not at the cost of presidential roses.

As I tried to take mind off the antics of a few Americans that have more belly fat than brains…I started thinking about the term “president-elect”….that time from the end of a presidential election the winner calls himself “president-elect”…..but where did the term come from and when did it become into common use?

In 1793, Washington wrote a letter concerning his upcoming second inauguration as president in which he referred to himself as “president-elect.”

Numerous letters by the Founding Fathers contain the term “president-elect” in connection with the 1796 presidential election.

Of particular note is a letter from James Madison to Thomas Jefferson, sent on Christmas Day 1796. Wrote Madison:

“Unless the Vermont election of which little has of late been said, should contain some fatal vice, in it, Mr. Adams may be considered as the President elect. Nothing can deprive him of it but a general run of the votes in Georgia, Tenissee & Kentucky in favor of Mr. Pinkney, which is altogether contrary to the best information.”

A great source for info on the history of our politics….

The report is that there will about 25,000 troops in and around DC for the inauguration……what?

That is more troops that we have in our two longest wars….about double….the troops in DC will be there to stop any more silliness from the stupid far right.

“National Guard members are postured to meet the requirements of the supported civil authorities, up to and including protective equipment and being armed if necessary,” according to the statement. “The public’s safety is our top priority.”

Gen. Daniel R. Hokanson, chief of the National Guard Bureau, told reporters Monday that a force of up to 15,000 will deploy to D.C. with all their issued equipment, including their individual weapons. So if the need arises, “they are close by and they are readily accessible.”

BBC News has some good photos of the troops in and around DC…..https://www.bbc.com/news/world-us-canada-55654102

With so many troops in and around DC for the big day….some fear for an insider attack on the day…..

Some 25,000 National Guard troops are flooding into Washington, DC, to provide extra security for President-elect Joe Biden’s inauguration Wednesday—and the federal government is working to ensure none of the troops represent a potential threat. Officials speaking on condition of anonymity tell the Washington Post that the FBI is working with the Army to vet the incoming troops amid fears of an “insider attack.” “We’re continually going through the process, and taking second, third looks at every one of the individuals assigned to this operation,” Army Secretary Ryan McCarthy tells the AP. He says the Army, which already reviews members for connections to extremist groups, has been providing Guard members with additional training on identifying possible insider threats.

McCarthy says the vetting process hasn’t identified any threats from within the military so far. He says numerous service members attended President Trump’s rally before the Jan. 6 riot, but its not clear how many of them actually stormed the Capitol. The Army says it is also working with the Secret Service to determine which service members will require additional background checks, the Post reports. “There is no place for extremism in the military and we will investigate each report individually and take appropriate action,” the Army said in a statement. “The Army is committed to working closely with the FBI as they identify people who participated in the violent attack on the Capitol to determine if the individuals have any connection to the Army.”

The nation will hold it’s breath.