2020 RNC Convention begins tonight……and seems to be a family affair…..not to worry Trump has decided that he will give his acceptance speech on the grounds of the White House…….. 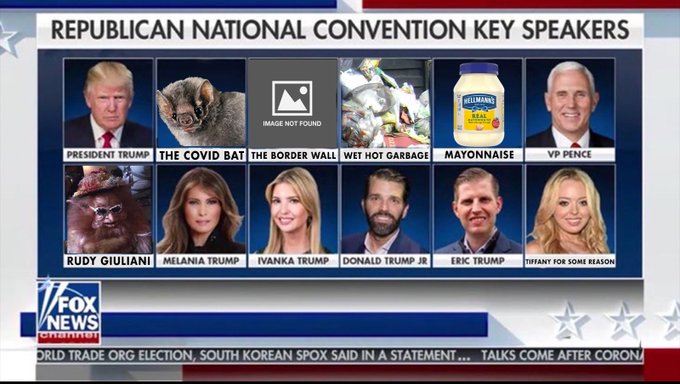 Sorry I could not resist…….but in case you need more information I am here to help…..

Republicans will aim to recast the story of Donald Trump’s presidency when they hold their national convention beginning Monday, featuring speakers drawn from everyday life as well as cable news and the White House while drawing a stark contrast with Joe Biden. Trump is looking to shift his campaign from being a referendum on a presidency ravaged by a pandemic and economic collapse and toward a choice between vastly different visions of America’s future. Reshaping the national conversation around the race has taken on greater urgency for Trump, who trails in public and private surveys as the devastation of the coronavirus. The four-day event’s theme is “Honoring the Great American Story,” the AP reports. The convention will showcase well-known supporters, including Trump family members, but also those whom the GOP say are members of the “silent majority” aided by the president’s policies.

The lineup will primarily feature figures on the conservative media circuit intended to energize Trump supporters. Planners insist they will present a more “positive” convention than the Democrats’ roasting of Trump. Yet the president appears intent on stoking cultural divides, particularly around racial injustice and policing. Speakers will include Reps. Matt Gaetz of Florida and Jim Jordan of Ohio, staunch defenders of Trump; Nicholas Sandmann, who as a high school student gained attention for his interaction with a Native American man during Washington demonstrations; White House counselor Kellyanne Conway; Clarence Henderson, a civil rights figure from the 1960s addressing the “true meaning of peaceful protest”; Rudy Giuliani, Trump’s personal attorney; Sen. Mitch McConnell; and UFC President Dana White. More than 1,000 guests are anticipated on the South Lawn when Trump delivers his acceptance speech Thursday night. The RNC has sought approval to launch fireworks after the speech.

The line-up appears to be those supporters that will kiss his, Trump, ass…but that is just my thoughts.

For your musical enjoyment while you wait for the first night’s analysis…….

2 thoughts on “Step Right Up!”