Those people around Donald the Orange have not had a goo run in the court systems…..just look at the criminals that have saddled up to Trump.

Now we can add yet another Trumpian stoolie….Steve Bannon. 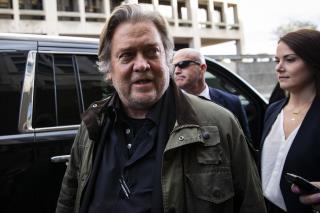 He has been indicted by the Manhattan court….

Former top White House adviser Steve Bannon appears to be facing serious legal trouble. Federal prosecutors indicted him Thursday on charges that he defrauded hundreds of thousands of donors in a online fundraising campaign, reports CNBC. The charges are related to a group co-founded by Bannon called “We Build the Wall,” which sought to raise money to build a border wall, per Bloomberg News. Prosecutors say he used money raised by the group for personal expenses. Three others also were charged, reports CNN. Bannon has been arrested and was due to make a court appearance Thursday.

Prosecutors say that Bannon and another organizer, Brian Kolfage, pledged to take no compensation, but that Bannon received $1 million and Kolfage more than $350,000, reports the Washington Post. Those two and two others (Andrew Badolato and Timothy Shea) are accused of routing money from the online campaign through a shell company in an attempt to conceal their personal payments, say prosecutors. They all face charges of conspiracy to commit wire fraud and money laundering in the campaign, which the Hill reports raised more than $25 million. Bannon was a key adviser in President Trump’s 2016 campaign, then served as a top strategist in the White House until he was fired in the summer of 2017.

Donald the Orange is having a real bad year and it just keeps getting worse….more and more of his toadies are getting snapped up by the judicial system.

Trump’s pardon finger has got to be getting tired….and I am sure that he will use it more and more between now and January of 2021…….then hopefully he will be back in New York bothering locals instead of screwing the nation.

32 thoughts on “Another Bad Day For Trumpites”