Our form of government is masterful at wasting money….from useless wars to programs of stupidity to giving cash away for no other reason that “they can”…..

One such give-away is to the state of Israel during the pandemic…..the Senate Bill is…S3176……

The Senate Foreign Relations Committee quietly passed a bill yesterday to give Israel a minimum of $38 billion over the next ten years despite the ongoing devastation to the U.S. economy caused by the coronavirus.

The bill – S.3176 –  will now go before the full Senate. Since the legislation has already been passed by the House of Representatives, if the Senate passes the bill, it will then go to the president to be signed into law.

The bill was passed by the committee under two unusual circumstances and with almost no public awareness.

First, Senate Committee Chairman Jim Risch (R-Idaho) refused to allow a live stream of the meeting, despite the fact that the Senate Rules panel had recommended that extra efforts be taken to ensure public transparency while the Capitol is closed to the public and the presence of reporters is severely limited. The Senate’s Press Gallery Standing Committee of Correspondents had objected strongly to Risch’s decision.

Second, the bill was passed without being named, debated, or even discussed, even though it would set into law the largest such aid package in U.S. history. There has been no mention of the bill by most media in the United States.

But please if you doubt my word read the bill for yourself (you can read right?)……

Let me see….the Senate is willing to let the unemployment guarantees expire to save cash but will mail a check to Israel for $38 billion….now you tell me who these spineless ass wipes work for.

Now you know Israel is more important that the American worker….my thought is……. F*ck Israel….Let Them Make It Own There On Or F*cking Die…….

Help get this BS out for the world to see what our government will do for our “friend”….the media will not release this report so it is up to us bloggers to make it an issue.

Vote the slugs out and try to find someone who will put the American people first….and let Israelis worry about Israel.

This one government program is one that many Americans use along with Medicare…..and yet almost every Congress has a plan to reform the program and in the process gut what little benefits American retirees actually get.

The GOP NEVER stops trying to destroy the program and will go to extreme lengths to do so.

Has anyone ever noticed the GOP with its extreme spending always looks to social security in the fight for a balanced budget and the fight against the rising deficit?

And they are at it again because of Covid-19…..they want to gut the program just a little more…..

A proposal by Sen. Mitt Romney to establish congressional committees with the specific goal of crafting legislative “solutions” for America’s federal trust fund programs has reportedly resurfaced in GOP talks over the next Covid-19 stimulus package, sparking alarm among progressive advocates who warn the Utah Republican’s bill is nothing but a stealth attack on Social Security and Medicare.

Politico‘s Burgess Everett reported Wednesday that Romney’s TRUST Act, first introduced last October with the backing of a bipartisan group of senators, “is getting a positive reception from Senate Republicans” in coronavirus relief discussions, which are still in their early stages. The legislation, Everett noted, “could become part of the mix” for the next Covid-19 stimulus as Republicans once again claim to be concerned about the growing budget deficit.

It amazes me that the toothless old farts that depend on SS for their retirement would keep voting these slugs in the GOP into office….and almost every time they lose a little more out of the their retirement.

I have now decided that these fools deserve the f*ckings they get from the GOP…..because they are beyond ignorant that they will vote against their best interests.

So bend over seniors and drop those drawers and enjoy the ride.

Since you are too slow to learn stuff…..you deserve every f*cking you get from the GOP.

Trump has got his wish and the economy is trying to make a comeback….well idiots are rushing out to show their solidarity with the mindless beast in White House…..

The Memorial Day weekend marking the unofficial start of summer in the US meant big crowds at beaches and warnings from authorities Sunday about people disregarding the coronavirus social-distancing rules and risking a resurgence of the scourge that has killed nearly 100,000 Americans, the AP reports. Sheriff’s deputies and beach patrols tried to make sure people kept their distance from others as they soaked up the rays on the sand and at parks and other recreation sites around the country. Among the Memorial Day scenes and warnings:

In Missouri all is open even those stylish hair salons….and two beauticians have infected many…..

One hundred and forty clients at a Missouri hair salon were potentially exposed to the coronavirus after two hairstylists worked while symptomatic, and then later tested positive for COVID-19. The Great Clips in Springfield says it is reaching out directly to all customers impacted and that all will be offered tests, NBC News reports. After the first stylist tested positive, the city on Friday said 84 customers and seven employees had potential exposure; on Saturday, the city revealed the second stylist had tested positive and had worked while “experiencing very mild symptoms,” adding 56 customers to the list of potential exposures.

The first stylist worked eight days while symptomatic, the second worked five. Both were wearing face coverings, as were customers. The salon has since been closed for cleaning and sanitizing. One customer whose hair was cut by the first stylist says officials have asked him to self-quarantine for 14 days while monitoring himself for symptoms. “All this because someone wasn’t responsible,” he tells KY3, adding that he came in contact with 15 to 20 people before he was notified of his potential exposure. “I know that the employee feels really bad about what happened. I’m sure they both do but you have a situation that caused a chain reaction.”

Then there is the idiot in Florida that spit and coughed on police after claiming to have the virus……and now his penalty….

A Florida man who spat and coughed on a police officer after claiming to have COVID-19 was indicted on federal terrorism charges.

Curry had previously been charged by criminal complaint last month and could face up to five years in prison if he is convicted.

Not to worry…..do you know someone that has these traits?

I know someone with those traits…..and he will kill many from his lack of empathy…..and his reckless behavior….. 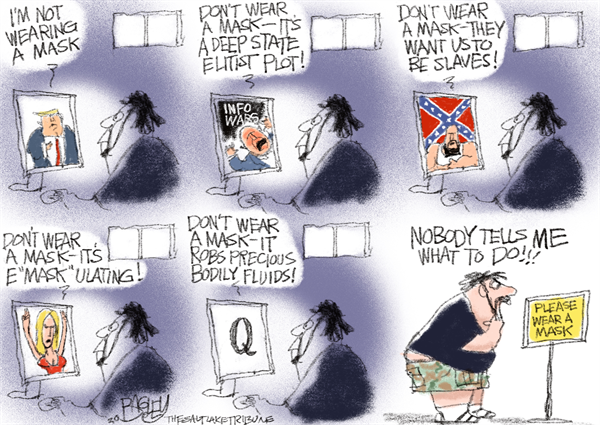 November is quickly approaching and some of us have not decided who will get the vote…..I will focus on Biden since most intelligent people already know what a tool Trump is…..

First let me state here for all to read so there is NO confusion…I am not a Biden supporter…..but that explanation is for a later post…..this one is about something Biden has stated recently on taxes….

Joe Biden wants a tax code that supports the everyday, salt-of-the-earth Americans who earn $400,000 a year.

In an interview with CNBC Friday morning, the Democratic nominee sounded some populist notes while defending his (quite progressive) ideas for raising taxes on capital gains, corporations, and the labor income of the superrich. “My tax policy is based on a simple proposition,” Biden explained, “which is, stop rewarding wealth and start rewarding work a little bit.”

But while blue America’s standard-bearer evinced enthusiasm for soaking the superrich, he vowed to preserve the (historically low) tax rates that America’s merely rich currently pay: Under a Biden administration, “Nobody making under 400,000 bucks would have their taxes raised. Period. Bingo,” the candidate declared.

This is nothing but a campaign promise that is soon forgotten….but he and they keep making them and the voter keeps buying the crap spread…..and then they sit around the kitchen table looking at their lives a wonders what went all wrong.

Ignorance, gullibility and laziness is what went wrong….and this election will be NO different.

A recently released IG (one of the few left employed at this time) report on the progress of the mission in Afghanistan…..and it is so sad……

The Lead Inspector General Report to the United States Congress on Operation Freedom’s Sentinel (OFS) has been published. the 88-page report covers the period of January through March 2020. This quarterly report is required by Congress.

The Inspector General’s of the Department of Defense, Department of State, and USAID contribute to the report. The DoD IG is the lead for the report. Usually there is a classified appendix containing information about OFS; however, the coronavirus pandemic has precluded that work.

Operation Freedom’s Sentinel is a two-part mission for the United States. The first is to conduct the U.S. counterterrorism mission against al Qaeda, the Islamic State of Iraq and Syria – Khorasan. The second part is to, in concert with NATO and other Coalition nations, develop the capacity of the Afghan security ministries and to train, advise, and assist the Afghan security forces.

This report provides a detailed summary of events in Afghanistan during the first three months of 2020. It provides an update on the political, diplomatic, and military situation as well as the status on the train, advise, and assist mission to further develop the Afghan security ministries and the Afghan National Defense and Security Forces. This report, along with the recent SIGAR quarterly report to Congress, will keep the reader informed on the current situation in Afghanistan.

You would think that a country that is so involved in the troops that they would care more about the wars they are fighting.

To me all the troop support is just a feel good move so the rest of us do not have to deal with these massive wars….we pretend that we are so proud and yet we seldom show that pride other than props and slogans.