It is sad enough that 30 million people are unemployed and having to subsist on the unemployment benefits to make ends almost meet…….now there are those that are committing fraud over these benefits and NO it is not some persons in this country….Nigeria is the culprit.

If you thought the Nigerian prince scam was all there was….then think again……

The Secret Service has detected a large-scale foreign attack on the U.S. unemployment system that is processing record numbers of jobless claims amid the pandemic, according to The New York Times.

In a Secret Service memo obtained by the Times, the agency described the attack as a well-organized Nigerian fraud ring that could lead to “potential losses in the hundreds of millions of dollars.”

“We are actively running down every lead we are getting,” Roy Dotson, a special agent who specializes in financial fraud at the Secret Service, said in an interview with investigators obtained by the Times.

It is sad that fraudsters use the pandemic to enrich themselves.

My opinion is these people are worse than lowly slugs and should be punished harshly.

These days with the mental midgets showing up at state capitals and demanding the right to infect themselves and others with the Covid-19 I thought back to the young days of our republic…..

The year was 1786 and the memories of the Revolutionary War were still fresh in most minds…..the country tried to raise revenue by some taxes and of course then as now people were outraged that they should have to pay for anything…..

But for those that have a hard time remembering what they were taught in school…..this is important for it was the first time that the new American government had to flex its muscle….

A note here that most used statement by Jefferson about the tree of liberty came about because of this incident.

Shays’ Rebellion was a series of violent protests staged during 1786 and 1787 by a group of American farmers who objected to the way state and local tax collections were being enforced. While skirmishes broke out from New Hampshire to South Carolina, the most serious acts of the rebellion occurred in rural Massachusetts, where years of poor harvests, depressed commodity prices, and high taxes had left farmers facing the loss of their farms or even imprisonment. The rebellion is named for its leader, Revolutionary War veteran Daniel Shays of Massachusetts.

Although it never posed a serious threat to the still loosely organized post-war United States federal government, Shays’ Rebellion drew lawmakers’ attention to serious weaknesses in the Articles of Confederation and was frequently cited in the debates leading to the framing and ratification of the Constitution.

The threat posed by Shays’ Rebellion helped persuade retired General George Washington to reenter public service, leading to his two terms as the first President of the United States.

In a letter regarding Shays’ Rebellion to U.S. Representative William Stephens Smith dated November 13, 1787, Founding Father Thomas Jefferson famously argued that an occasional rebellion is an essential part of liberty:

“The tree of liberty must be refreshed from time to time with the blood of patriots and tyrants. It is its natural manure.”

I believe that this incident and few others were the reason for the inclusion of the 2nd amendment to the Bill of Rights…..

It seems that Donald the Orange has a problem with the latest economic relief package…..he will screw seniors over cuts in Social Security that he and those spineless pricks in the GOP desire.

“Trump’s actions are a war on seniors. He is insisting on threatening Social Security on which most seniors rely for their food, medicine, and other basic necessities.”

Grassroots advocacy groups representing millions of retirees and seniors across the United States are speaking out against and urging Congress to oppose President Donald Trump’s threat to block desperately needed Covid-19 relief legislation if it does not slash the payroll tax, which funds Social Security and Medicare.

“It is outrageous, callous, and cruel for President Trump to hold the American people, and seniors in particular, hostage if Congress doesn’t go along with his plan to gut Social Security for current and future retirees,” said Richard Fiesta, executive director of the Alliance for Retired Americans, an organization with over four million members nationwide.

“The president’s plan is also bad economics. Social Security puts more than $800 billion into the economy each year. Destabilizing the system when we are in the middle of an economic downtown is exactly the opposite of what we need to do,” Fiesta added. “The 4.4 million members of the Alliance for Retired Americans call on all members of Congress to refuse to make such a deal. We will fight this attempt to gut Social Security and in November we will remember who was willing to defend and protect our earned benefits.” 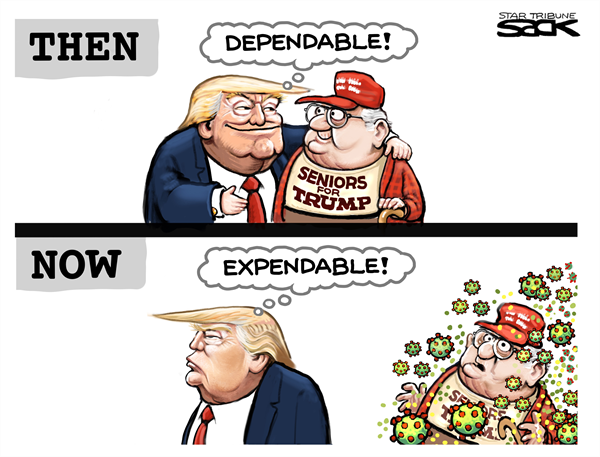 I have written many times that NATO is nothing more than an arm of a new form of imperialism……this organization is not needed any longer….but the news around it illustrates just how dangerous this organization has become…..

The US is trying to rid itself of the burden of Africa……and would use NATO to do its bidding….

NATO’s Secretary General Jens Stoltenberg has already been on the record stating that NATO allies would likely support joining France’s counterinsurgency effort, Operation Barkhane in the Sahel, which includes Burkina Faso, Chad, Mali, Mauritania, and Niger. The conflict, which started in 2014, has proved to be the bloodiest in recent French history. An existing EU counterinsurgency mission in the Sahel has already involved a number of NATO members, including the U.K., Spain, Denmark, and Estonia, and while the U.S. has long played a limited and supporting role to this operation, the death of four U.S. special forces soldiers in a gun battle in Niger in 2017 brought the issue to domestic attention.

Yet, this renewed interest is about more than just terrorism.

It appears the new front for NATO and the confrontation with Russia and China is the Arctic……but could any confrontations become more than a minor incident?

The FONOP in the Barents Sea represents the first time in 40 years that NATO warships have stepped into Russia’s front yard. It’s also the first time in 20 years that U.S. spy subs have been given a mission of this importance in the region, with the potential to start a shooting war should anything go wrong. Hopefully history will not repeat, and no ships or submarines will be lost in this head to head challenge. More importantly, if another tragedy should occur, we can only hope that it will not escalate into World War III.

What started as a 20th century security institution has evolved into a major arms supplier and conflict instigator.

Time for NATO to go ahead and let something more in line with the 21st century take its place….