Before the days when cops have a free hand at killing American citizens….there were antiwar protests all over the nation……one particularly deadly encounter was Kent State….

Do you remember this iconic photo from the massacre? 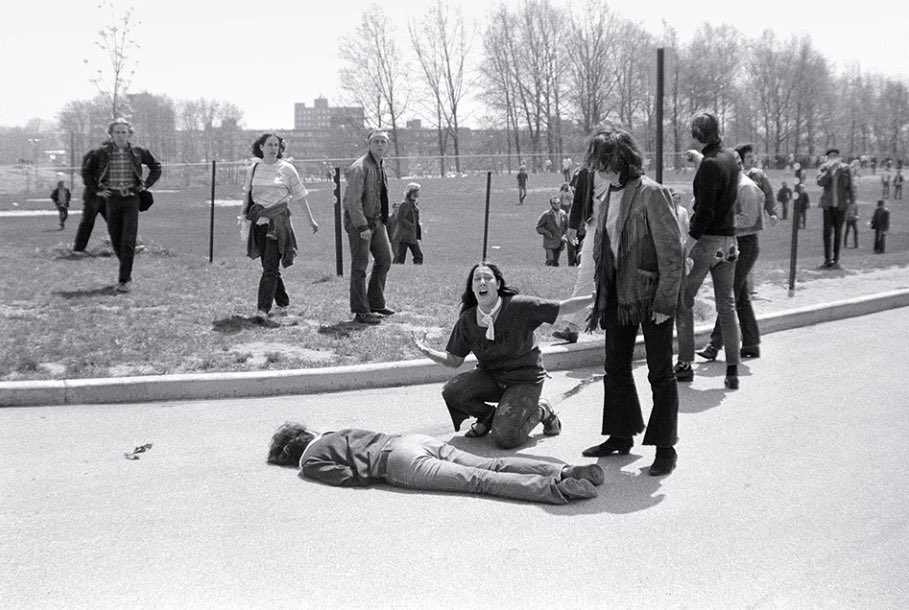 On this day in 1970 Ohioan National Guard open fire on protesting students……with disastrous results….death and maiming……

On May 4, 1970, in Kent, Ohio, 28 National Guardsmen fire their weapons at a group of anti-war demonstrators on the Kent State University campus, killing four students, wounding eight, and permanently paralyzing another. The tragedy was a watershed moment for a nation divided by the conflict in Vietnam, and further galvanized the anti-war movement.

Two days earlier, on May 2, National Guard troops were called to Kent to suppress students rioting in protest of the Vietnam War and the U.S. invasion of Cambodia. The next day, scattered protests were dispersed by tear gas, and on May 4 class resumed at Kent State University. By noon that day, despite a ban on rallies, some 2,000 people had assembled on the campus. National Guard troops arrived and ordered the crowd to disperse, fired tear gas, and advanced against the students with bayonets fixed on their rifles. Some of the protesters, refusing to yield, responded by throwing rocks and verbally taunting the troops.

What did those deaths accomplish?

As usual nothing happened…other than the deaths of some students….of which some were not part of the protest…..and yet they are dead…..

For those that did not read the links….these are the names and wounded at Kent State on 04 May 1970…..

Killed (and approximate distance from the National Guard):

Wounded (and approximate distance from the National Guard):

Least we forget……may they R.I.P.