Donald the Orange has a truly terribly bad week last week…..his rambling nonsensical bullshit he calls a virus briefing finally caught up with his ass…..and the nail that was the last in the coffin of his immature rantings at the press conferences was the drink bleach silliness.

In case you missed it….the person that put this damn stupid idea in that small Trumpian head was one Mark Grenon…..

Dear Mr President, I am praying you read this letter and intervene.” That’s how Mark Grenon says he began a letter to President Trump proclaiming the alleged curative power of industrial bleach—right before Trump went on TV and supported disinfectant as a treatment for the coronavirus, the Guardian reports. Grenon, whose Genesis II Church of Health and Healing peddles bleach as a health cure, said Sunday on his radio show that he and 30 supporters had recently written Trump at the White House. They sought protection from the Food and Drug Administration, which has acquired a court order stopping the Florida-based group from selling a bleach product to treat the coronavirus.

“Despite a previous warning, the Genesis II Church of Healing has continued to actively place consumers at risk by peddling potentially dangerous and unapproved chlorine dioxide products,” said FDA Commissioner Stephen Hahn in a statement. “We will not stand for this.” The FDA said the Genesis product, called “Miracle Mineral Solution,” is “an unproven and potentially harmful treatment” that “has a chlorine dioxide equivalent to industrial bleach.” In Trump’s statement about the coronavirus, he surprised medical experts by saying disinfectant “knocks it out in a minute. One minute!” Grenon and the White House have not responded to requests for comment, the New York Times reports.

Now he has the bright idea of cutting the pressers in an attempt to avoid putting the small foot in that large mouth…..after all there is not much time before we mortals go to the polls and Trump’s mouth keeps losing him points…..it has NOTHING to do with safety.

A day after a virus press briefing in which President Trump set off a firestorm with his supposedly sarcastic disinfectant comments, buzz began that we soon may not see too many of these briefings. Axios reports that Trump is said to be mulling having the pressers decrease in both frequency and duration, the latter mainly because the president himself would cut his time at the podium. One source notes it appears to have hit Trump that the briefings may be hurting him, which some of his advisers apparently agree with, believing he’s appearing before the American people way too much in an often contentious environment—and that these appearances may be helping political rival and presumptive Democratic nominee Joe Biden.

“I told him it’s not helping him,” one adviser tells the outlet. “Seniors are scared. And the spectacle of him fighting with the press isn’t what people want to see.” Forbes notes that his Friday press conference, the day after the disinfectant hubbub, “ended abruptly,” and without the usual reporter Q&A. Per CNN, the presser, at 22 minutes, was the shortest of the pandemic (they sometimes stretch for more than two hours), with a source close to the coronavirus task force saying Trump had been bothered by all the “flak” he got over his disinfectant comments the previous day. The Hill reports neither Dr. Anthony Fauci nor Dr. Deborah Birx appeared at Friday’s briefing, noting the briefings “have proven to be minefields” for medical experts like them as they try to deliver accurate, science-based info to the American public without getting Trump riled up

Now he decides to do the right thing?

His ego has putting millions in jeopardy. 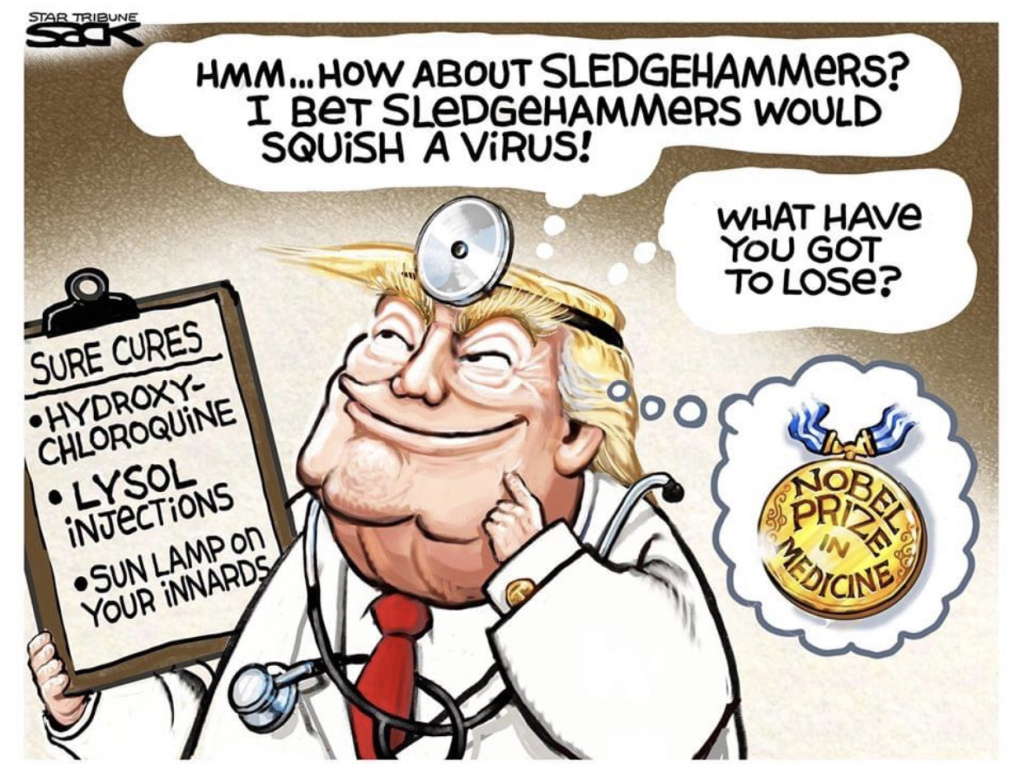 Hopefully there will be a price for that carelessness.

12 thoughts on “A Really Bad Week”