First, I would like to wish my French followers and readers a Happy Bastille Day…..”Liberté, egalité, Fraternité”

Weakened but still potent, Barry inundated the Gulf Coast but appeared unlikely to deluge New Orleans as it continued its slow advance. Still, Gov. John Bel Edwards on Saturday urged residents across south Louisiana to stay “vigilant,” warning that Barry could still cause disastrous flooding across a wide stretch of the Gulf Coast overnight. “This storm still has a long way to go before it leaves this state,” Edwards said. “Don’t let your guard down.” New Orleans had braced for heavy rains Saturday, reports the AP, but instead had intermittent bands of showers and occasional sunshine. Though Barry will continue to dump rain throughout the weekend, forecasters downgraded rainfall estimates for the city through Sunday to between 2 to 4 inches. Forecasters had earlier said New Orleans could get up to 20 inches of rain, raising concerns that water pumps strengthened after Hurricane Katrina would be overwhelmed.

Summer is in full swing and time for the Psi Phi (ΨΦ) Society get together for food, fun and debate…..(meeting must go on even thru a storm, LOL)

The society members get together four times a year at the eatery of a friend and have a good meal then we pick a subject from a stainless steel bed pan give everyone 30-45 minutes to prepare their take on the subject.

This session is the heritage site in Turkey of Gobekli Tepe…..this is a fairly new discovery of an ancient structure that has many debate what its purpose was…..

Archaeologically categorised as a site of the Pre-Pottery Neolithic A Period (c. 9600–7300 BC) Göbeklitepe is a series of mainly circular and oval-shaped structures set on the top of a hill. Excavations began in 1995 by Prof. Klaus Schmidt with the help of the German Archeological Institute. There is archelological proof that these installations were not used for domestic use, but predominantly for ritual or religous purposes. Subsequently it became apparent that Gobeklitepe consists of not only one, but many of such stone age temples. Furthermore, both excavations and geo magnetic results revealed that there are at least 20 installations, which in archeological terms can be called a temple. Based on what has been unearthed so far, the pattern principle seems to be that there are two huge monumental pillars in the center of each installation, surrounded by enclosures and walls, featuring more pillars in those set-ups.

I disagree that it was nothing more than a religious site…..why?  First the location in Turkey…… 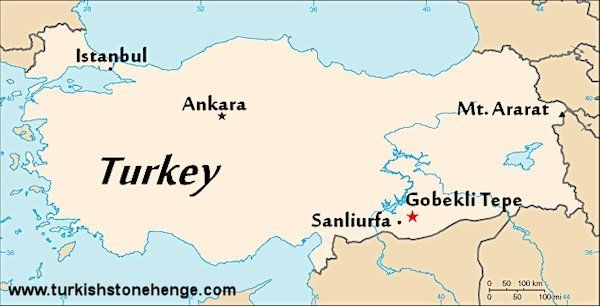 The site is in an area that has many rivers and large streams…..why does this matter?  Civilization was made possible by the nearness of a waterway.  I feel this was more than just a lonely religious ceremonial site.

The possibility that inhabitants of this region could be the forefathers of the Sumerians…..https://www.history.com/news/9-things-you-may-not-know-about-the-ancient-sumerians

The people moved down the Tigris and branched out……..

Another ancient city has been found in Iraq…older than Sumer…..

A team of French archaeologists has located the remains of a lost ancient city in Iraqi Kurdistan.

Over the course of six excavations between 2012 and 2018, researchers uncovered the ancient city at Kunara, near the Zagros mountains. Previously, experts had been prevented from exploring the site, near the modern city of Sulaymaniyah, by Saddam Hussein’s regime and conflicts in the region.

This is not some scholarly endeavor on my part just some thought and a little knowledge.

The Droughts in the Middle East do have their benefits…..The little known Mittani civilization has new legs in academia…..

A team of German and Kurdish archaeologists have discovered a 3,400-year-old palace that belonged to the mysterious Mittani Empire, the University of Tübingen announced on Thursday.

The discovery was only made possible by a drought that significantly reduced water levels in the Mosul Dam reservoir.

“The find is one of the most important archaeological discoveries in the region in recent decades and illustrates the success of the Kurdish-German cooperation,” said Hasan Ahmed Qasim, a Kurdish archaeologist of the Duhok Directorate of Antiquites who worked on the site.

Plus there has been an announcement about those Biblical bad boys the Philistines…..

The ancient Philistines, the Biblical villains whose origins have puzzled scholars for decades, came to the Middle East from southern Europe more than 3,000 years ago, new DNA testing has shown.

If anyone would like to add their thoughts please feel free to do so.

The evening ended and we were full and content……these types of get together are always a joy….good friends and good food and a couple of great goblets of wine…..

Barry is on land now and we are getting some rain…after almost a month without it and temps of over 100 this is a bit of a respite….hopefully everyone in Louisiana was prepared .  We were.

While I prepared for the Storm Barry to show up I checked my supplies and my meds to be sure I had enough to last 2 weeks in case the storm was more dangerous than predicted….and this had me thinking…..

I admit that the older I get the more drugs I seem to need to keep going….and those prices are so damn high that all us old farts are bitching about the prices.

There are many theories as to why this situation exists…..mine is that Congress just protects its handlers profits……but could there be another possible answer?

How about the US Trade policies?

Skyrocketing drug prices were a major issue in the 2016 US presidential campaign, and the Trump administration has since announced measures to bring them down. Why, then, is the administration also pushing for intellectual-property rules that give pharmaceutical giants even more price-gouging power?

Sharp price increases for essential and life-saving medicines have generated a political backlash against the pharmaceutical industry in the United States. In February, the US Senate Committee on Finance scolded industry representatives for pursuing policies that are “morally repugnant.” Since then, 44 US state governments have filed a lawsuit against Israel-based Teva Pharmaceuticals and 19 other companies, alleging conspiracy to stifle competition for generic drugs and illegal profiteering from over 100 different medicines.

For its part, US President Donald Trump’s administration has also announced that it will pursue measures to reduce the prices of drugs, especially those needed to treat America’s opioid epidemic. Yet the administration is also trying to export intellectual-property rules that are known to be associated with massive price increases abroad, making basic medicines unaffordable to millions of poor people in developing countries.

As much as I would love to be able to blame it all on Trump I just cannot….every president is just as guilty….it has NEVER been about the health of the people rather the profit of the corporations.

Pharma and insurance companies are panicking with the popularity of Medicare For All…I have even had a few come to IST and try to wish away the Medicare For All program…..but they will succeed because they have the cash to buy the Congress to get their way and the rest of us can just die if we do not like their plans.

Sorry about that a rant first thing on a Sunday.

Looks like we were fortunate and all we got here was rain and a bunch of wind…..one down and waiting for the next……0330 hrs and 93 degrees….getting back to normal…..