One of the most controversial programs in our schools is sex education…..OMG!  they will teach our children how to have sex?

That is one of the dumbass questions that is asked when the subject of sex education is brought up at a school board meeting…..that is not what the program would be about…..

The program would teach our kids what happens when they have sex…unwanted pregnancy….it would also teach the kids about STDs….safe sex would be the aim of the program….but to some that would be tantamount to teach our children to be prostitutes….

For most of the religious types there is only one acceptable way to have safe sex and with the Trumpian thought process ….the only thing would be abstinence…..

Abstinence-only education — encouraging adolescents to wait until marriage for sex — is making a comeback under President Trump.

In a marked departure from the previous administration, conservatives at the Department of Health and Human Services (HHS) are putting an emphasis on abstinence to reduce teen pregnancy rates.

“We definitely are seeing a shift,” said Kelly Marcum, a government affairs legislative assistant at the Family Research Council in Washington, which supports abstinence-only education.

“We’re really excited to see that the administration is giving some tools back to us to keep pushing that fight.”

My point is that teens have raging hormones and they are going to have sex so why not teach them all about the act….knowledge would go a long way to preventing unwanted pregnancies….

We cannot blame Trump as much as I would like to…..ignorance does more damage…….. many babies are born out of ignorance….besides what is better than sex?

Pompeo is gone from the CIA to the big seat at State…..the word now is that a women will lead the CIA…..that would be historic…..

With his decision to move CIA chief Mike Pompeo into the post of secretary of state, President Trump made a little history. He also nominated Gina Haspel to replace Pompeo, thus setting her up to be the first woman to run the spy agency. The nomination must be confirmed by the Senate, and it’s a safe bet that critics will raise the issue of Haspel’s links to the CIA’s controversial waterboarding program. Haspel, as was reported last year during her confirmation process to become deputy CIA chief, once ran a secret CIA prison in Thailand where terror suspects such as Abu Zubaydah and Abd al Rahim al-Nashiri were waterboarded in 2002, reports the AP. In fact, Zubaydah was waterboarded 83 times, per NPR, which also notes that Haspel is accused of destroying videotapes of the interrogations after Congress demanded they be preserved.

The flip side of her resume is that Haspel joined the CIA in 1985 and made a name for herself in covert operations, reports USA Today. Trump called Haspel an “outstanding person,” and Time notes that President Obama’s national intelligence director, James Clapper, said last year that he was happy she’d been nominated for the No. 2 post and that Haspel was “widely and deeply respected by the workforce.” Still, the waterboarding issue had already surfaced in the first hours after Trump’s announcement. “No one who had a hand in torturing individuals deserves to ever hold public office again, let alone lead an agency,” said Human Rights First’s Raha Wala, per the AP. No word yet on when the Senate confirmation process will begin

I was mistaken….I thought the ass kisser Sen. Cotton would be made head of the CIA…..he should have to wait for the next opening…..and that opening my be McMasters gig……

One of the world’s greatest scientific minds has now left this dimension. British cosmologist and physicist Stephen Hawking has died at the age of 76, some 55 years after he was diagnosed with motor neurone disease at 21 and given two years to live. Family members say Hawking died peacefully early Wednesday at his home in Cambridge, England, the BBC reports. “We are deeply saddened that our beloved father passed away today. He was a great scientist and an extraordinary man whose work and legacy will live on for many years,” children Lucy, Robert, and Tim said in a statement, per Sky. “He once said: ‘It would not be much of a universe if it wasn’t home to the people you love’. We will miss him forever.”

Hawking, born in 1942, was known for his groundbreaking research on black holes and the origins of the universe. Books like best-seller A Brief History of Time made him what the AP calls “one of science’s biggest celebrities since Albert Einstein,” appearing on shows including The Simpsons and Star Trek: The Next Generation. Signs of his illness—also known as ALS or Lou Gehrig’s disease—appeared during his first year of graduate school. He lost what remained of his voice in 1985. “I have lived with the prospect of an early death for the last 49 years,” he told the Guardian in a 2010 interview. “I’m not afraid of death, but I’m in no hurry to die. I have so much I want to do first.”

I never liked Tillerson and glad to see him go….this is an opinion on the new guy at State by a fellow blogger…..chuq 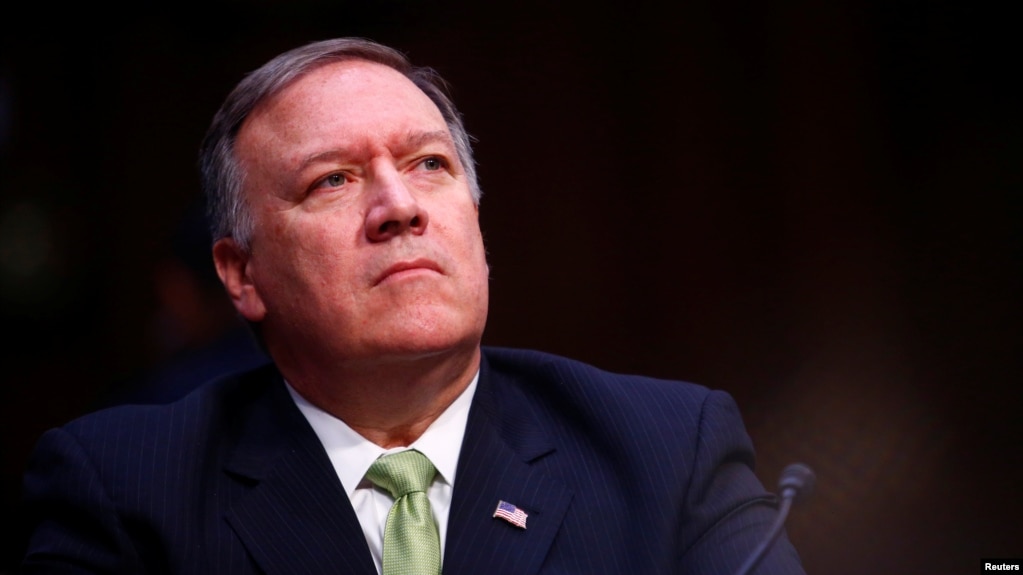 CIA Director Mike Pompeo testifies before the U.S. Senate Select Committee on Intelligence on Capitol Hill in Washington, May 11, 2017./ Reuters

The Editorial Board of the Guardian has written an opinion piece that reflects my thinking regarding the precipitous firing of the Secretary Of State Rex Tillerson over the weekend of March 10, 2018 where the state secretary was never officially notified but he did see the president’s tweet. After this dirty deed was done, Mr. Tillerson did receive a phone call from the president from Air Force One after noon on the 13th of March.

I have been critical of Mr. Tillerson’s management of the US Department of State but still he was a voice of reason, a voice that was respected by foreign officials even as they recognized that he was not always operating on the same page as his boss. I had been very clear eyed…