By now the world has witnessed the protests being lead by students of the school last visited by gun violence…….too many are bad mouthing the students for their activism even to the point of claiming that they are puppets or even actors….

One FOX anchor person even went so far to try and bully a 17 year old…..it backfired miserably (but what can you expect from anyone on FOX)…in case your nose picking got in the way of your current events…

Laura Ingraham offered an apology to Parkland school shooting survivor David Hogg Thursday—after multiple major advertisers heeded his call to pull their ads from her Fox News show. Hogg, who has become a prominent gun-control advocate since the mass shooting, called for the boycott after Ingraham taunted him for “whining” about being rejected from colleges, the New York Times reports. “On reflection, in the spirit of Holy Week, I apologize for any upset or hurt my tweet caused him or any of the brave victims of Parkland,” Ingraham tweeted Thursday, inviting the 17-year-old to appear on her show.

At least nine advertisers have announced their intention to boycott Ingraham’s show, including TripAdvisor, Nestle, Hulu, Wayfair, Nutrish, and Stitch Fix, reports the Hill. “In our view, these statements focused on a high school student cross the line of decency,” TripAdvisor said. Hogg rejected Ingraham’s apology, noting that it was only issued after advertisers started pulling out. “I will only accept your apology only if you denounce the way your network has treated my friends and I in this fight,” he tweeted. “It’s time to love thy neighbor, not mudsling at children.” The Washington Post notes that the episode shows the Parkland survivors have power “not just in organizing rallies but in spurring corporate America to act.” 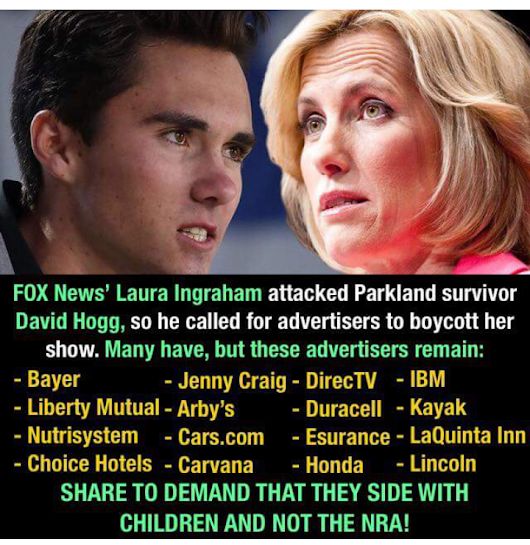 BTW in about 24 hours she lost 4 sponsors and she offered an apology…but it was a typical Right Wing apology….tried to toot their horn and not a heart felt apology just trying to save their butts…did she mean her apology?  Only to the point that her career would suffer….so NO not sincere.

When I saw this and read the news I immediately thought of the Queen song…..

The grand kids of the 70’s protesters…..so activism must be like male baldness….skips a generation…..

The vile response of Right Wingers to these kids has me worried for their safety……in the same thought I am proud of their activism.

Some even claim some protesters want to kill gun owners…..

A Republican state lawmaker in North Carolina claimed this week that speakers at the March For Our Lives rally in Washington, D.C. on March 24 — many of them shooting Parkland shooting survivors — wanted to “murder” gun owners. She provided no evidence to support her outlandish accusation.

“They’re out to take your guns, and our freedoms,” State Rep. Beverly Boswell wrote in a Facebook post on Monday, above a photo of Marjory Stoneman Douglas High School students Tyra Hemans and Emma Gonzalez, who lived through a mass shooting at their school last month that left 17 people dead.

PS:  After I wrote this draft news has been leaked that Laura will take next week off from her gig on FOX.  Is she being punished or is she going into hiding to wait this storm out?

Plus the total number of lost sponsors has hit a dozen probably more by now…..

It is Saturday and I am in an historic frame of mind…..

I am a member of a program that takes mere civilians to analyze satellite images for possible archeological sites…..while looking at an image of Northern Iran I spotted a long line that looked like a wall of about 120 miles in length…..I know that there are a few walls that are very long…the Great Wall of China and Hadrian’s Wall in Britain……being the geek I started researching for a possible explanation and after awhile I found one……

The ‘Red Snake’ in northern Iran, which owes its name to the red colour of its bricks, is at least 195km long. A canal, 5m deep or more, conducted water along most of the Wall. Its continuous gradient, designed to ensure regular water flow, bears witness to the skills of the land-surveyors responsible for marking out the Wall’s route. Over 30 forts are lined up along this massive structure.

Their combined size is about three times that of those on Hadrian’s Wall. Yet these forts are small in comparison with contemporary fortifications in the hinterland, some of which are around ten times larger than the largest Wall forts. The ‘Red Snake’ is unmatched in so many respects and an enigma in yet more. Even its length is unclear: its western terminal was flooded by the rising waters of the Caspian Sea, while to the east it runs into the unexplored mountainous landscape of the Elburz Mountains. An Iranian team, under the direction of Jebrael Nokandeh, has been exploring this Great Wall since 1999. In 2005 it became a joint Iranian and British project.

So I did not find a new site but I got to do what I enjoy…..research….

Your history lesson is complete……