You know this administration is well worth the entertainment they provide…..it would be extremely humorous if it were not a bit pathetic…….

Trump seems to think in his delusional haze that people are standing in line to work for his admin…….

During a joint press conference with Swedish Prime Minister Stefan Löfven, the president told reporters that “everybody” wants to work in his White House.

“So many people want to come in. I have a choice of anybody,” Trump continued. “I could take any position in the White House and I’ll have a choice of the 10 top people having to do with that position, everybody wants to be there.”

Events tell a different story……30+ resignations in 13 months does not sound like people are dying to work in the Trump admin….. 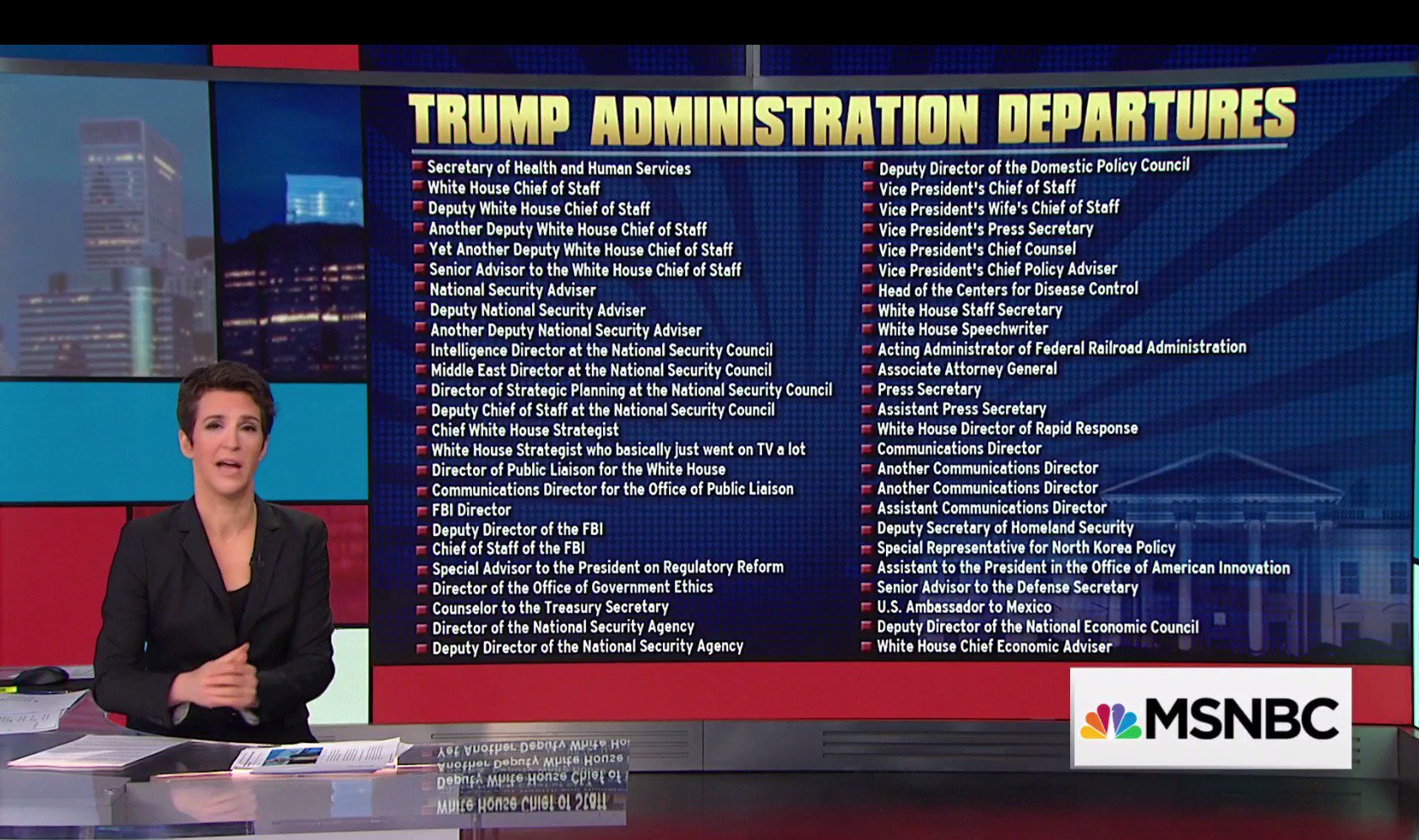 My day is done…..time for some Thai food and a beer….keep smiling and I will be back with more stuff……chuq

It is closing in on the 2018 mid-terms and many seem to think there will be some sort of “Blue Wave” that will sweep Dems into offices at all levels.

I have my doubts but I am NO political strategist so what do I know…..I recently read a great letter that was sent to the DNC about Dems in general and their stands in particular…..read the letter it is very telling…….

That was no government shutdown. It was a long weekend. It was a snow day.

Don’t get me wrong. I am no fan of shuttering the federal government as a tactic of political negotiation. In the first place, it inflicts hardship on the people you’re sworn to serve. In the second place, it confirms the U.S. Capitol building as the world’s most majestic day care center.

Shutting down the government is almost always the wrong thing to do. But as my pastor likes to say, if you’re going to do wrong, at least do wrong right.

Like I said…great questions and great points for Dems to consider before they step before the American voter.

But they will beat the same horse that lost them their majority…..I do not think they have learned anything…..the old…..doing the same thing over and over…….

Let’s talk impeachment…..NO …not everything is about Trump……

There is a wealth of talk these days about ways to remove a president……the one that rings true to most Americans is the term “impeachment”….but before the eye rolls start let me say that this post is NOT about the impeachment of our present president but rather a more historic one…. the trial of Andrew Johnson…..the president after Lincoln……

Hopefully we all learned something from the trial …..like the trial in 1990’s….just because the president is impeached does not mean he will leave office.

Sex, sex, sex……Flynn, Flynn, Flynn….taxes, taxes, taxes……say goodbye to Al Franken…….that was last year and in the mean time people are dying of disease in Yemen, nukes may go to the Saudis, Jerusalem has been made the capital of Israel……and the world continues to turn…..and in a slow burn thanx to the American president……

Let’s look at say Franken (my example du jour)……he has resigned because of his events prior to his election to the Senate and yet there is a good chance that a pedophile could be elected to the Senate from Alabama(he was not)…..my my how far we have come…..for in 1987 a candidate was forced to resign because of a photo of a young woman sitting on his lap….Don’t hurt yourself….the candidate was Gary Hart.

And today we can just say that it is “fake news” and all is okay and the candidate could skate to a win.

So far in August 2017 the lies are running rampant……

As of August 7, 2017, Donald J. Trump will have been in office as president of the United States for 200 days. This period of time will largely be remembered for the rancor and distrust sewn between his administration, the media, and the general public, as well as any numbers of investigations, scandals, and gaffes of various size and degree (occurring both on Twitter and in real life), but what stands out in perhaps the highest relief have been the falsehoods. (And his unconscionable perversion of the exclamation point.) Without further ado, a trio of Vogue contributors list what they believe to be Trump’s greatest hits: his most memorable, notable, or otherwise mind-boggling lies, from crowd size to James Comey. Follow along to see if your favorite made the cut!

Of course the “fake news” machine will have a field day trying to push back on the lies.

The hatchet job that Trump TV (FOX News) is doing on the FBI……while I personally have no love for the FBI I have no doubt that they are honorable and hardworking….the lies about the FBI has been taken up  by the cowards in the House and Senate…..these toads are regurgitating everything thing that FOX throws at the political wall.

The hard working bloggers that carry the torch for Trump continue to make excuses for Trump’s lack of any governing skills…..stock market is the Deep State that is after Trump….there is NO deep state ……..we do have a president that probably cannot pick his nose without doing harm or checking with FOX first.

Watch any “bad” news for Trump and the chorus like a Greek play, starts trying to make the case that someone somewhere is pulling the strings around Trump.