There is a lot of chest thumping at the diminished presence of ISIS in Iraq and Syria…..some, Trump included, are even going so far as to claim the ISIS is a dead organization.

I am not one of those people.

I have written numerous times that ISIS is diminished but not totally defeated….to me Southern Asia is looking like the next region that could suffer from the rise of ISIS….even Africa is part of the resurrection….and there is yet another area that could be in the ISIS game plan…..the Balkans.

So-called Islamic State has vowed to decapitate ‘infidels’ and kill Serbs, Croats and Muslim ‘traitors’ in the Balkans in a new threat to the region published in the Bosnian version of the jihadists’ magazine.

“No, we swear by Allah, we have not forgotten the Balkans,” the Bosnian version of ISIS’s magazine Rumiyah warned as the terror organisation issued a new threat to the region.

In an article entitled “The Balkans – Blood for Enemies, and Honey for Friends”, the terror group makes direct threats to Serbs and Croats over their roles in the Balkan wars, as well as to Muslim ‘traitors’ to the Islamic faith.

Now the question is…… will the US return to the Balkans militarily?

The 1990’s gave us the Balkans Wars of Serbia, Bosnia and Croatia….the US and NATO fought several wars in the region….is the Trump admin willing to return to the Balkans…..

Making the world a safer place….one war at a time.

I am out of the OR and seem to be recovering just fine…….

For years since the advent of the flying brick, F-35 which was scheduled to replace the A-10 as a close combat aircraft, I have been writing trying to help save the A-10 and looks like all our efforts have paid off.

The Air Force is moving ahead with plans to re-wing several squadrons of A-10 Thunderbolt II attack aircraft in fiscal years 2018 and 2019, and intends to maintain the platforms through the 2030s, the commander of Air Combat Command said Jan. 25.

Funds are available in the current budget to allow the service to reopen a wing contract, Gen. James “Mike” Holmes said during remarks at the Brookings Institution, a Washington, D.C.-based think tank. The previous contract ended due to cost issues, among other reasons, he noted.

“It was a contract that was no longer really cost-effective for Boeing to produce wings,” he said. “Now we’re working through the process of getting another contract.”

Small steps to keep the A-10 flying in close support of our overworked troops.

Sorry to say that I am in the hospital and did not (would not) watch the SOTU speech by Pres. Trump…..of course the only positive thing that he, Trump, has to regale the country with his his economic policies….

The only people that will reap the benefits of the Trump economic policies is the wealthy…..the GOP will thump their chest over the pittance that the middle class will get for the next 5 years and nothing will be said about the wealthy permanent benefits….but what the Hell he gotta have something to bullsh*t the unwashed masses with, right?

In his State of the Union address on Tuesday, President Donald Trump is sure to point to stock indexes and other positive economic indicators as evidence of a “Trump boom.” But to the extent that middle-class and working families are doing better economically, it is not because of Trump or his policies; rather, it is in spite of them. Instead of fighting for American workers, as he promised to do during his presidential campaign, Trump has sought in numerous ways to disempower them.

The Trump administration’s fiscal policies are redistributing income and wealth upward through massive new tax breaks to corporations and the wealthy, which come at the expense of middle-class and low-income Americans and investments in key economic priorities such as infrastructure. And by ending the Deferred Action for Childhood Arrivals (DACA) initiative, the administration has thrown the lives of hundreds of thousands of young people—who, with DACA, have been able to get better- and better-paying jobs, buy houses and cars, and make significant economic contributions to the nation as a whole—into chaos.

All in all….I am glad that I was on pain meds after the surgery topped me from watching the most boring of evenings.

I am a political wonk….I truly love keeping up with current events…..but I am so weary of this president and his supporters that I scheduled a surgical procedure on the day of the SOTU speech so I do not have to listen to Trump’s silly words.

Back in October of 2017 I had surgery that left me with 4 toes short of a full set.  After the torture of hyperbarics for a month they tell me that I need yet another surgery….they say it is minor but I feel that if I am under the influence and laid out on a table then it is not all that minor.

So sadly I will not be posted as much as I usually do plus I will be posted from my Smartphone which is a major pain in the ass.

Just wanted to let my readers know that small amount of posts is not me losing interest in my blog but rather a medical necessity at least according to my doctor.

Please bear with me and keep your fingers crossed and I shall return to full form as soon as possible.

Hopefully everyone will have a good day.

Anybody that is an old fart and served in the military will know the name of “Beetle Bailey”….a great cartoon about the Army life of a US Army private……

Sad news the creator of this beloved cartoon has died…..

Comic strip artist Mort Walker, a World War II veteran who satirized the Army and tickled millions of newspaper readers with the antics of the lazy private “Beetle Bailey,” died Saturday. He was 94.

Walker died at his home in Stamford, Connecticut, said Greg Walker, his eldest son and a collaborator. His father’s advanced age was the cause of death, he said.

Walker began publishing cartoons at age 11 and was involved with more than a half-dozen comic strips in his career, including “Hi and Lois,” ”Boner’s Ark” and “Sam & Silo.” But he found his greatest success drawing slacker Beetle, his hot-tempered sergeant and the rest of the gang at fictional Camp Swampy for nearly 70 years.

The character that was to become Beetle Bailey made his debut as Spider in Walker’s cartoons published by the Saturday Evening Post in the late 1940s. Walker changed Spider’s name and launched “Beetle Bailey” as a college humor strip in 1950.

In 1943 he was drafted into the U.S. Army, serving in Europe during World II. He was discharged as a first lieutenant, graduated from the University of Missouri-Columbia and pursued a career as a cartoonist in New York.

“Beetle Bailey” also featured one of the first African-American characters to be added to a white cast in an established comic strip. (“Peanuts” had added the character of Franklin in 1968.) Lt. Jack Flap debuted in the comic strip’s panels in 1970.

Thanks for the great humor and may he rest in peace…… 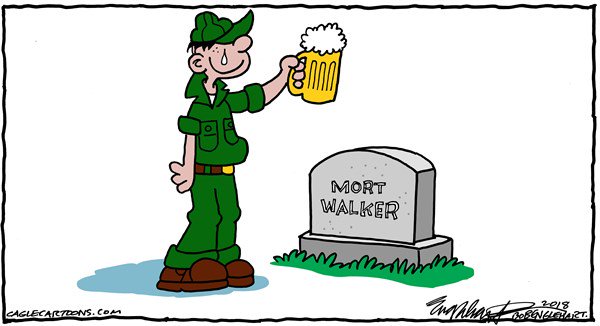 As long as we are talking about paying for sex……..

Sex has been a part of politics since the beginning….after all they say it is the first profession.

It has played a role in history even in the morally superior US of A…..most recently with Sen. Vitter to NY governor Spitzer to even our present president with the accusations from a “Stormy” kind of love.

So I guess my history lesson for today is a list of important men through history that have had a burning love for prostitutes…….

Most men have a weakness, whether it’s gambling, booze, lying, infidelity, or what have you. We’ve found that the more serious the flaw, the more it’s grounded in compulsion. Throughout history, men of the highest stature, intellect, and position have found themselves unable to resist the allure of women of the night. Whether it be the result of the time, or carnal needs of the man, these figures could not live without paid female companionship…

A side note….the once powerful evangelicals have lost their claim to the moral high ground with the support and acceptance of politicians accused and/or convicted sexual deviates…..

Of course this is a post about Donald Trump…..have you noticed that his supporters are just like their man crush….they are bullies, self-centered and damn right boring……just like the president……but let’s move on….by now you have heard more than you want to know about Trumpy Bear’s(registered trademark) sex life.

There is so much more and more important of a story than the sleazy side of sex…..can you remember the evangelicals and their shaping of Repub politics? 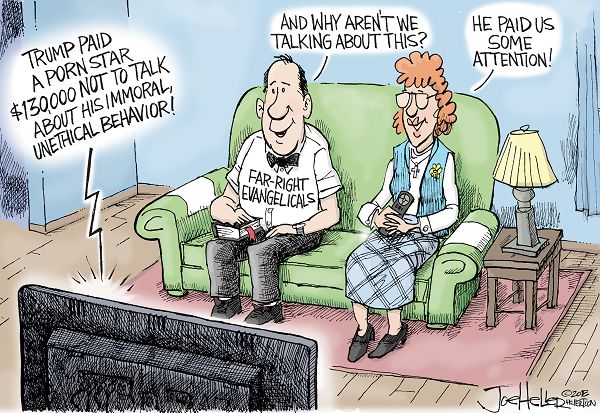 This scandal-in-waiting shows more than Trump’s sexual tastes…..it illustrates that those evangelicals that have been so front and centered in GOP politics can NO longer claim to hold the moral high ground.

Donald Trump is a man without any discernible redeeming qualities, but nonetheless I’m grateful for one thing he’s done, without really trying: He has exposed the true nature of the Christian right. For more than a decade now, I’ve been diligently writing and researching, trying to build the case that the religious right is not motivated by moral values, but by hatred of women and LGBT people — and that many of them are white supremacists, to boot. And then here comes Trump, bragging about how he likes to “grab them by the pussy” and spreading racist propaganda, and sweeps up 80 percent of the white evangelical vote, more than true-believer George W. Bush got in 2004.

https://www.alternet.org/news-amp-politics/stormy-daniels-scandal-has-exposed-christian-right-once-and-all
I can say that I never thought I would live to see the day when evangelicals make excuses for perverted actions of a politician…..
Personally I never thought these evangelicals held the moral high ground but they were given that title by the media and self-serving Christians that never live by Christian beliefs.
In Saner Thought
Blog at WordPress.com.