Mississippi Is Number One!

I wish I was talking about education or economics or jobs outlook….even football…..but unfortunately I am not talking about anything like that………this time we made the most unhealthy state……

Below is the article in the Clarion-Ledger, one of Mississippi’s more read newspapers…….

Despite being a leader in telehealth and, historically, childhood vaccinations, Mississippi’s high rate of childhood poverty, obesity and cigarette smoking contributes to it being the unhealthiest state in the country, according to the 2017 America’s Health Rankings report.

Of the five categories examined in the report, Mississippi ranked overall 50th for one: clinical care. This has to do with Mississippi’s doctor shortage, lack of mental health providers and preventable hospitalizations.

I wish just once Mississippi could make it to a “Best” list……but that will not happen until we change the “good old boys” politics…..there is hope for my granddaughter’s generation to make that happen.

My day is over….I am worn out by health stuff and our politics…..time for me to call it a day and shut the ‘puter down…..see you guys tomorrow…..chuq

Breaking News (a little late)……..the pedophile in Alabama has lost the senate race……Jones has won….long live the republic.

By now the media has worked the Trump announcement of the move of the embassy in Israel to Jerusalem for all it is worth.  Finally the MSM has taken notice of what is happening in the “Holy Land” that is other than some Israeli being attacked or some errant missile flies into Southern Israel.  But the Western media only shows the protests by the Palestinians seldom the brutality of the Israeli forces….

Trump’s knee jerk decision was given birth to more protests all over the Middle East.  It all looks like the Arab people are behind the Palestinians….but what about the Arab leaders?

Jordan’s king has given support, so has Turkey the same with Lebanon…the Arab League has issued statement but it is a toothless warning……

Lebanon’s Foreign Minister Gebran Bassil said during the emergency meeting that Arab nations should consider imposing economic sanctions against the United States to prevent it moving its Israel embassy to Jerusalem from Tel Aviv.

“Pre-emptive measures (must be) taken … beginning with diplomatic measures, then political, then economic and financial sanctions,” he said, without giving specific details.

The Arab League is a toothless tiger thanx to the Saudis who are working much like the US at the UN Security Council…..but what good is it when the leader is an Israeli stooge?

The Palestinians stand little chance because the “leader” of the Arab World has been playing nice with Israel for several years trying to head off Iran’s growing presence in the Middle East.  I even read on Twitter that some twat from Saudi suggested that the Palestinians pick a village outside Jerusalem as their capital.

Then the country of Bahrain has sent a delegation of friendship to Israel…..

Amid ongoing controversy over the US decision to move its embassy to Jerusalem, a Bahraini delegation has arrived in Israel to “send a message of peace”, according to media reports.

A report in the Times of Israel on Sunday said the visit indicated a warming of ties between the two countries, which do not maintain diplomatic relations.

Looks like Bahrain is following the Saudi example and betraying the Arab world…..especially the Palestinians.

The question has been asked….what is up with the Saudis and Israel?

Israel and Saudi Arabia may seem unlikely allies in regional politics but recent developments have pushed Riyadh and Tel Aviv closer together, setting the stage for the Middle East’s strangest bedfellows.

The covert ties between Israel and Saudi Arabia, based on an alliance against the “common threat” of Iran, are part of a new regional paradigm, analysts say.

The inclusion of Israel as a potential partner reflects a break from the fragmented order in the Middle East, where since the early 2000s the United States has sought to create a hegemonic system to dominate West-friendly states, brought about by either elections or deposition.

This is a great moment for Qatar…..they can become the pillar for Palestinian statehood…..

Why would Trump do this ill advised thing  (the recognition)?

Trump’s decision was all about placating his base. There is no other strategic rationale for taking this step now, which is why the president’s advisers have struggled in background briefings to explain how it is in the United States’ security interest. And even the domestic politics for Trump are not very compelling: Sure, he promised to move the embassy during the campaign, but this was not a central tenet of his platform.

I always appreciate good political humor…..and SNL does it about as good as there can be done…….and I really thought that a news report that I read was a story in “The Onion”……

There’s plenty of speculation in DC about whether President Trump might fire special counsel Robert Mueller. But Mike Allen of Axios reports on another strategy being explored by the president’s legal team: Appoint a second special counsel to investigate Mueller’s investigation. The story suggests that Trump’s attorneys trust Mueller himself but not others in the Justice Department. For example, they point to a Fox News story Monday detailing how the wife of a Justice Department official named Bruce Ohr worked for the company behind the infamous anti-Trump dossier that emerged during the election. Ohr was recently demoted for concealing his own meetings with the company, Fusion GPS.

“The Department of Justice and FBI cannot ignore the multiple problems that have been created by these obvious conflicts of interests,” Trump attorney Jay Sekulow tells Axios.
“These new revelations require the appointment of a special counsel to investigate.” It’s not clear how likely this is to happen, but Attorney General Jeff Sessions has previously floated the idea of a second special counsel to cover a wide range of GOP concerns. Meanwhile, the Washington Post has a profile of Trump’s legal trio: Sekulow (the TV presence), Ty Cobb (a White House attorney), and John Dowd (Trump’s personal attorney). They “serve not only as Trump’s lawyers but also as his strategists, publicists, therapists—and, based on Dowd’s claim that he wrote a controversial presidential tweet, ghostwriters,” per the Post.

My question is who will run this investigation?  FBI?  But I thought they were all corrupt and partisan.  How about the Congress?  Same reasons.

House GOP are morons……they do not know how stupid they appear with this made up BS from FOX…….they cannot think beyond their daily talking points……

Just who will handle this in-depth investigation?

By now the news of the defeat of the ‘Bama pedophile has been making every show on 24 hour news networks…..but in case you could care less….a short synopsis…….

It’s Doug Jones. The Democrat won election to the Senate from Alabama on Tuesday, dealing a political blow to President Trump, reports the AP. Jones narrowly defeated Republican Roy Moore, a one-time GOP pariah who was embraced by the Republican Party and the president even after facing allegations of sexual impropriety. An attorney and former prosecutor, Jones rallied voters on a message of moving past the Moore controversies. He was buoyed by an influx of national Democratic cash and endorsements.

Jones’ victory is set to narrow the slim Republican majority over Democrats in the Senate to 51-49. His win in the Republican stronghold energizes the Democratic Party as it looks to build on anti-Trump sentiment to mount a challenge next year to Republican control of Congress. With 92% of votes counted, Jones had 49.5% of the vote to Moore’s 48.8%, per CNN, which also called the race for Jones.

What does this mean?

It means that the GOP had a deeply flawed candidate.  It does not mean much more than that.  The networks would have us all believing that there is a ground swell for Dems…..I just do not see it.

But I see what the Dems are doing….they are setting the stage for 2018….they are putting out as much positive spin as possible over this election.  I understand why they are making more of this than there is…….

Jones needs to go and kiss every black person he meets for without them he would be shoveling Sassy’s crap. 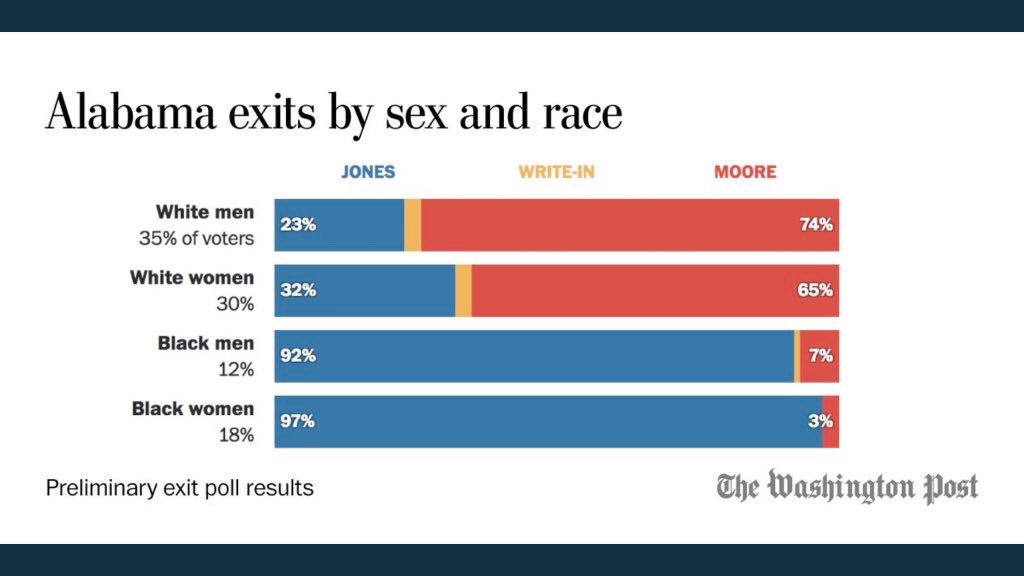 Now on to 2018……and we will see just how big this vote was in reality.

Try to keep up.  The beliefs that AQ and ISIS hold dear come from the the teaching s from Saudi Arabia……the vicious aspect of ISIS/AQ come from the teachings of Wahhabism…….you want to hate some Muslims because of their actions then hate the Saudis for it is where the craziness of terrorism originates.

The London Bridge attack and recent bombing in Manchester have again raised the question, what influences jihadists to carry out such horrendous acts?

“Yusuf”, a Muslim in Bradford, like the majority of British Muslims, rightly condemns such terrorist acts as contrary to the teaching of Islam.

“Such acts are caused by Wahhabism and its teaching of hate”, he says imploringly.

Wahhabism, a puritanical Islamic movement, found mainly in Saudi Arabia, originated in the 18th century from the teachings of the fanatical preacher, Muhammad Ibn Abd’al Wahhab.

Rejecting most practices of the majority of Muslims as bidah (harmful innovations), he ordered his fellow Arabs to accept his form of Islam or die.

Since all this hatred began I have tried to make  Americans see just what they hate…..it is is not all Muslims but rather those bastards that follow wahhabism the religious teachings of Saudi Arabia.

Do not make all Muslims pay for the stupidity of a few……and Americans need to know who they hate…..as it is now with the leader we have now they just hate for the sake of hate.