I Hate These Posts!

Posts where I report on the deaths of US soldiers…..this time it is in my state and not from some armed conflict in an international hell hole…… 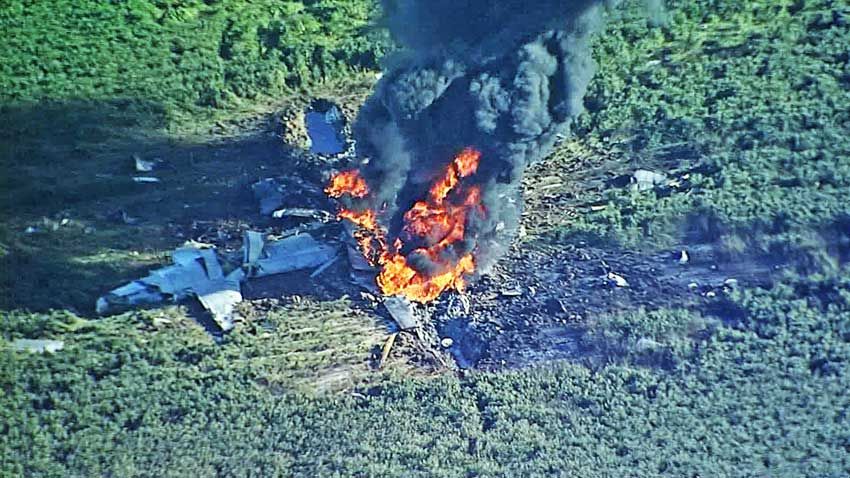 A US military plane crashed into a field in rural Mississippi on Monday, killing at least 16 people aboard and spreading debris for miles, officials said. Leflore County Emergency Management Agency Director Frank Randle told reporters at a late briefing that 16 bodies had been recovered after the KC-130 spiraled into the ground near Itta Bena, about 85 miles north of Jackson in the Mississippi Delta. Marine Corps spokeswoman Capt. Sarah Burns said in a statement that a KC-130 “experienced a mishap” Monday evening but provided no details. The KC-130 is used as a refueling tanker.

Andy Jones says he was working on his family’s catfish farm just before 4pm when he heard a boom and looked up to see the plane corkscrewing downward with one engine smoking, the AP reports. “You looked up and you saw the plane twirling around,” he says. “It was spinning down.” Jones says the plane hit the ground behind some trees in a soybean field, and by the time he and other reached the crash site, fires were burning too intensely to approach the wreckage. The force of the crash nearly flattened the plane, Jones says. “Beans are about waist-high, and there wasn’t much sticking out above the beans,” he says.

My sympathies go out to the families of those troops that perished in the place crash.

Just a short reminder to my loyal readers…..tomorrow may be a short day for I have to get a battery of tests and I have no damn idea how long it will take….never fear there will be a few posts but not sure how many…..chuq

North Korea is chest thumping…ISIS is being handed their butts in Iraq and Syria…the president is on another international trip……and Twitter is all a bloom with this or that….in other words there is lots in the news but some interesting stuff is not making it into the headlines or the evening news…..

I know that the 2016 election is over and Trump has won….but there is another story about that election other than reliving it or dissecting it ad nauseum…..

The DNC is facing a couple of lawsuits…….

The mainstream media—perhaps not surprisingly—is virtually ignoring three pending lawsuits against the Democratic National Committee (DNC) and the Commission on Presidential Debates, all of which cast a glaring light on the bald corruption eating away at the current political process. But they should not be ignored. More than just footnotes to the tumultuous 2016 election, these are legal battles that could have broader implications on third-party and independent political movements in U.S. elections going forward.

Thanks to disclosures from WikiLeaks, it became obvious late last year that the Democratic National Committee privately colluded to block Bernie Sanders from winning the presidential nomination. These were damning exposures that eventually cost then-DNC chairwoman Debbie Wasserman Schultz her job. The worst of course, was the revelation that former DNC chair, Donna Brazile, secretly provided Hillary Clinton with the topics ahead of CNN’s televised debates.

Plus the Democratic Party is hitting a dead end in their search for an agenda that will return them to power in the Congress.

By playing for centrist and neoconservative votes, national Democrats have left the party floundering with no coherent political message and creating a daunting challenge for democracy,

The most encouraging trend in the otherwise bleak landscape of Western politics is the success of the “new kind of politics” unveiled by Bernie Sanders in the U.S., Jeremy Corbyn in the U.K., and parallel movements, parties and candidates in other countries.

In their recent campaigns, Sanders and Corbyn laid out specific progressive policies to address the real-life problems facing their constituents and their countries and to raise taxes on the wealthy and corporations to fully fund healthcare, education and other vital public services. This represents a dramatic U-turn from the vague, deceptive talking points of “center-left” Democratic, Labour and Socialist politicians of the past generation, under cover of which they quietly sold out their constituents to corporate, plutocratic and military-industrial interests.

The Party need lots of work……maybe the lawsuits will give it a jump start in finding a solution to their electoral problem….

Last month I wrote a post about the alleged death the the ISIS leader Al-Baghdadi……he is supposedly died in a Russian airstrike…but read it for yourself….

Source: Death Of A Bad Man – In Saner Thought

There is now a confirmation of his death….(sort of)…….

The Syrian Observatory for Human Rights (SOHR) claims to have “confirmed evidence” that ISIS caliph Abu Bakr al-Baghdadi is dead.

According to the UK-based, pro-opposition Syrian War monitoring group, they have been able to confirm the death of the al-Baghdadi via sources based in the Syrian province of Deir Ezzor who have contact with the top ISIS leadership.

The actual cause of the ISIS caliph’s death or when it occurred remains unknown. However, the source quoted by the SOHR said that it happened somewhere near the Iraqi border.

As of the present time, US, Kurdish and Iraqi sources cannot corroborate the SOHR’s statement on the death of al-Baghdadi.

Nope, has little to do with the two egocentric leaders that met just a couple of days ago……very little……

There was news that was lost during the Putin/Trump meeting……news that would have been the talk of the town if it had occurred a few days earlier or later…..

For decades presidents and world leaders have been trying to ban nuclear weapons…..while the two major leaders were massaging each other the rest of the world did something about all these WMDs.

Those who want to rid the world of nuclear weapons can celebrate a milestone at the UN Friday—122 nations backed the first global treaty to ban them. The big caveat? The nine nations known to have a nuclear arsenal, including the US, boycotted the negotiations, reports the Guardian. So what’s the point? Advocates say they hope that once the treaty is in force—which will formally happen when 50 nations ratify it later this year—the nations that currently have nukes will eventually come around.

‘Starting point’: “We don’t expect them to sign the treaty right now, but it’s a good starting point for changing perceptions,” Beatrice Fihn of the International Campaign to Abolish Nuclear Weapons tells the New York Times. Indeed, the treaty includes language that would allow nuclear weapons states to join, reports the AP.

Wonder how this will play in the news?

We just lived through the latest meeting of the 19 most economically powerful countries plus the EU or more commonly known as the G20.

That’s right these entities get together once a year and schmooze.

But what is this group really?

The Group of Twenty (G20) is the premier forum for international cooperation on the most important issues of the global economic and financial agenda.

The objectives of the G20 refer to:

The G20 brings together finance ministers and central bank governors from 19 countries: Argentina, Australia, Brazil, Canada, China, France, Germany, India, Indonesia, Italy, Japan, the Republic of Korea, Mexico, Russia, Saudi Arabia, South Africa, Turkey, the United Kingdom, the United States of America plus the European Union, which is represented by the President of the European Council and by Head of the European Central Bank.

If you would like a simpler definition then……it is about the control of what we get to do with what little money we have…..while bankers and financial institutions rake in the profits.

This time was no different than the last couple of meetings…..violence, protests, goon squads, etc, etc…….and there is the actual meetings…..(pause here for thought)……not much was accomplished except for a couple of “feel good” photo ops and everyone goes home……

The the next question would be…..was the meeting worth the effort?

Unfettered violence. Unbridled brutality. Outside our democratic community. When Angela Merkel held her closing address on Saturday afternoon at the G-20 summit in Hamburg, she used clear words to denounce what had taken place on the streets of Hamburg during the preceding day and night.

Cars and barricades ablaze, shops plundered, water cannons in constant operation, injuries, devastated city quarters, heavily armed special police units: The images of the violence in Hamburg have circled the globe. And they stood in stark contrast to those of the 20 heads of state and government who, at the same time, were listening to Beethoven’s “Ode to Joy” in Hamburg’s chic new Elbphilharmonie concert hall. Classical music inside, clashes outside.

The question that must now be asked, which the chancellor must also answer, is this: Was it all worth it? Or was the price too high?

Well?  Was it worth the effort?

What NO statement on the perceived “aggression” of North Korea?

Note:  This is intended as an FYI piece….nothing more……

We are having a helluva time with North Korea….some want it destroyed completely…..while others are not do demanding….but with all that aside what do we know about North Korea?

We know that it is a closed state…a communist state……we know that the people are super poor…..we know that their leadership is bit off (for lack of a better word)…..that it is isolated from the rest of the world….but how true is that statement?

It may be called the “hermit kingdom,” but an analysis by the Wall Street Journal shows that North Korea is hardly isolated. In fact, it maintains political and economic ties with 164 nations and has embassies in 47 of them. China is, of course, its biggest trade partner by far, with India second. Pyongyang, however, has relationships of various kinds all over the globe, from supplying construction workers in the Mideast to providing military training in Africa. All in all, these ties have helped the North “amass the money and technical know-how to develop nuclear weapons and missiles.” The full breakdown is here.

I keep hearing about the 500,000 people that died of starvation in the years pass and I hear about the crap the government pulls from people that have escaped to the “West”……but how accurate are these accounts…I am NOT saying they are not just we have no way to confirm their tales……

A blogging friend, Pete, owner of the WP site Beetleypete recently sent me a link to a journal a German who now lives in the UK kept when he visited NK……I would like for my readers that are interested to read it also…..

This guide is entirely unpolitical and has no hidden agenda. I am not a journalist, politician or historian. I’m doing this diary as much for myself as a reminder of a once-in-a-lifetime trip as for the information of prospective travellers.

It had been in the back of my mind for well over ten years that I wanted to see the Democratic People’s Republic of Korea (to give it its full name) in the flesh, but I never did get round to doing much about it.
However, seeing all the other communist countries fall by the wayside and embrace capitalism, I felt it was time to have a close look at this last remaining ‘socialist paradise’ before it’d be too late.
Political propaganda and the inherent cult of personality fascinate me. Stalin and Ceausescu may have tried something similar in their spheres of influence, but they failed to create anything like the reverence paid to Kim Il Sung, the founder of the DPRK and its president even eight years after his death!

Disclaimer:  I am by NO means suggesting that anyone take up their passports and head for North Korea…..but after years of horror stories I thought that this would be yet another source of information for my readers.