From The Days Of Old……

There is much hysteria in Germany these days (most of Europe as well)…..immigrants are being accused of all sorts of crimes….I am not saying that some are not committing these crimes just that they are being blamed for most of the crime.

There has even been a story circulating on some conservative websites about an increase in the sell of “chastity belts” in Germany….there are other stories along these lines……(at this point an image from Monty Python comes looming into my head….and like most of Python’s stuff…I get a chuckle)

With all this hysteria over immigrants there has been a rise in far right political parties in Europe….from Holland to Hungary to Macedonia….seems no country is immune to this fear and loathing….and Germany is NO different.

With this fear comes the news that there is a rise in the time worn “classic” from their past…..”Mein Kampf”…..

Germany has “a surprise bestseller” on its hands, reports the Guardian. Some 85,000 copies of Adolf Hitler’s Mein Kampf sold in Germany in the first year the book was published there since World War II. Andreas Wirsching of the Institute of Contemporary History—which began publishing scholarly copies in January of last year after a copyright expired, with the goal to challenge Hitler’s ideas—says the company is “overwhelmed” by the number, which works out to about 233 copies sold per day. A sixth print run will launch at the end of the month and English and French editions are in the works, but Wirsching says “it would be irresponsible to just let this text spread arbitrarily,” per the BBC.

This should be disturbing on many levels……

This is it for today my friends…see ya tomorrow.

Looks like police in France have finally caught up with the Kardashian robbers. Officials say 16 people have been arrested in connection with the Oct. 3 robbery at a Paris residence of Kim Kardashian West, who was tied up and locked in a bathroom by armed attackers who made off with an estimated $10 million in jewelry, the BBC reports. The New York Daily News reports that the suspects have not yet been charged, but they can be held for at least 96 hours under French law. Kardashian West, who recently spoke out about the terrifying experience for the first time, may be asked to identify the suspects in a lineup presented via video feed.

The reason I point out this story is that it got more attention than something that could be a thorn in Trump’s ass after 20Jan17…….please someone, anyone explain why this celeb is so goddamn important!

Yet another “Flash” for the MSM……mindless bullsh*t.

Former Iranian president Akbar Hashemi Rafsanjani, a pugnacious moderate who survived for decades despite challenging his own turbaned elite, died on Sunday after suffering a heart attack.

Rafsanjani’s death is a huge loss for both reformists and moderates, as he stood as a pillar for the two camps.

Rafsanjani emerged as a moderate counter-figure to the ultra-hardliners clustered around Ahmadinejad — under whom Iran’s relations with the West plummeted — and criticised the crackdown that followed Ahmadinejad’s disputed re-election in 2009.

His voice was a voice of moderate thought within the government of Iran…..with him gone the hard-liners may once again rule the roost…..and that could be a problem for the incoming admin…..

I attempt to keep my readers up-to-data on the movements and such of our troops….news and reports that do not make the evening news…..someone has to keep an eye on the crap the government is pulling…..and it will only get worse……..

First, the GOOD news…..NO American military personnel were killed in the past week……

Now for the BAD……Afghanistan….recently the Taleban has made a push to regain lost territory…..and the US will respond…..

Over two years after the Obama Administration announced a “draw-down” in which US Marines were withdrawn from the Helmand Province of southern Afghanistan, Marines are headed back in, the latest reaction to growing Taliban gains there and elsewhere in the country.

Though once again being claimed as an “advise and assist” operation, officials concede that the troops could well face combat operations in the province, where the Taliban controls several key districts and has contested control over the capital city of Lashkar Gah.

This is actually the second time during the US occupation of Afghanistan that the US withdrew ground troops from Helmand only to put them back later, with troops withdrawn in 2006 and the Marines deployment part of the 2008 escalation of the Afghanistan war.

More troops for the grinder…..we went to Afghanistan to get the son-of-a-bitch that caused the 9/11 attacks…..that SOB is dead….time for us to say “screw it” and bring our troops home….if things go South then we can do what we always do….use more force.

There has been much in the news lately about the use of “fake” news to create a situation that may not exist….I have written how I set about trying to decide whether the news is real or not…..

This is an FYI piece……I do not expect those who “know” the facts to employ any of these suggestions…..but I had to try. So….One More Time…… There has…

Source: The Curious Debate Over “Fake News” – In Saner Thought

And if there is still a doubt about the news you read then I found a fellow blogger that has his method of deciding the validity of a report…..(I contacted them for permission and I have not heard back….but if there is an objection I will remove this press and apologize)……

The basic purpose of these ten forms is the presentation of a false picture of reality.

You could find more forms, or divide these ten into sub-categories.

I know I am probably spinning my wheels for most do not want to know as long as the news and reports they get confirm their narrow thinking….

And that explains why this country is having all the problems….no one cares about real.  We Americans will buy knock-offs of anything….and that includes the news.

All this is just all too familiar…that is if one has a grip on history…..if not then that could explain the ignorance.

I have been having a good laugh at all the back and forth over the report that Russia was involved in a hack…..I wish I could say that there was anything usable in all the chatter and noise….but that would be a lie…the only thing that was given the public by either the media or the rags was hearsay and out right stupidity….and a few morons that are stroking out…..

But Mr. Trump got his briefing last Friday…..

A report declassified Friday by the US intelligence community states Vladimir Putin ordered an “influence campaign” during the 2016 US election to hurt Hillary Clinton and help Donald Trump, CNN reports. According to NBC News, the CIA and FBI have “high confidence” in that conclusion, and the NSA “has moderate confidence.” The New York Times calls the report “damning and surprisingly detailed.” The report says Russia’s campaign started out as an effort to undermine American democracy but mutated into a push to get Trump elected. “Putin and the Russian government developed a clear preference for President-elect Trump,” the report states. At the same time, it sough to “undermine public faith in the US democratic process, denigrate Secretary Clinton, and harm her electability and potential presidency.”

To do that, the report says Russia’s military intelligence arm GRU leaked hacked information from the DNC, John Podesta, and others to WikiLeaks and other third-party websites. Russia also “obtained and maintained access to elements of multiple US state or local electoral boards,” according to the report. It used paid social media users and state-sponsored media for propaganda purposes, or “trolling” and “fake news.” The report says Russia even had a #DemocracyRIP hashtag ready to go on election night if it looked like Clinton was going to win. Intelligence officials briefed Trump on the contents of the report. The president-elect maintained that possible Russian actions had no effect on the election.

Contrary to the Tweets…..there is NOTHING in this unclassified report that indicates that Russia did this alleged hack to influence the election (there could be parts that remain classified and were not included)…..and most of the trolls in the blogosphere would know that if they had read the report or had gathered news from reliable sources ….(again I am speaking of the released unclassified report)

But do not take my word for it…read the goddamn report for yourself…..

But I am guessing that those trolls will not take the time to read the report…they prefer their brand of “truth”…..plus anything over four characters will confuse them into a stupor.

I recently wrote a piece about the establishment of the US “Ministry of Truth”…..something that the government wants to add to an existing bill so they can decide what is “truth” and what is “fake”…..

Does anyone recall the “Ministry of Enlightenment and Propaganda”?

Do not hurt yourself diving for Google…..it is the title that Hitler bestowed on Joseph Geobbels…..there was a governmental agency that had a lock on the “Truth”….why do I bring this up?

I am so glad that you asked that one important question.

Source: The Birth Of The “Ministry Of Truth” – In Saner Thought

Since I wrote that op-ed back in the closing days of 2016….others have started commenting on this new “Ministry of Truth”……

The U.S. establishment is not content simply to have domination over the media narratives on critical foreign policy issues, such as Syria, Ukraine and Russia. It wants total domination. Thus we now have the “Countering Foreign Propaganda and Disinformation Act” that President Obama signed into law on Dec. 23 as part of the National Defense Authorization Act for 2017, setting aside $160 million to combat any “propaganda” that challenges Official Washington’s version of reality.

The new law mandates the U.S. Secretary of State to collaborate with the Secretary of Defense, Director of National Intelligence and other federal agencies to create a Global Engagement Center “to lead, synchronize, and coordinate efforts of the Federal Government to recognize, understand, expose, and counter foreign state and non-state propaganda and disinformation efforts aimed at undermining United States national security interests.” The law directs the Center to be formed in 180 days and to share expertise among agencies and to “coordinate with allied nations.”

Very soon the government will decide what news you are going to see and hear….not exactly what a free press means to me….how about you?

Feed the fear of the ignorant and you control the game….chuq–09Jan17 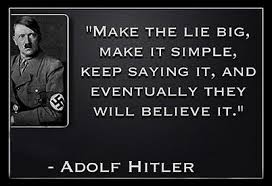