Today is the the that so many have been yearning for for decades…..we will install our new president…..

Since some people dread this day I thought I would leave my loyal readers with a little humor….

The guys/gals at Bad Lip Reading……

Humor…….something that there will be little of in the coming years…..end your day with a smile….

I close out with this week in political cartoons…..

Source: The nation’s cartoonists on the week in politics – POLITICO

Finally!  The day of days has arrived!  The joy of joys!

The day of redemption for the human race….the day when the Master assumes his rightful place on his throne among the gods….all bow in worship…..and the peons dance…..

The day the ignorant peons on the Right have been praying for……. your day has arrived.

Today is the swearing in of our new president and I was going to write about stuff other than this silly tradition….but then my granddaughter told me that I needed to write something….some thought on this day….she is a smart one and I do as I am told…..(to appreciate that you need to have grand kids…LOL)

So for those sheep that cannot exist without knowing what the day holds…I can help….

It’s the great port-a-potty cover-up for President-elect Donald Trump’s inauguration. Workers preparing for the inauguration Jan. 20 have taped over the name of the company—”Don’s Johns”—that has long supplied portable restrooms for major outdoor events in the nation’s capital. Virginia-based Don’s Johns calls itself the Washington area’s top provider of portable toilet rentals. But the name apparently strikes too close to home for inaugural organizers. Workers have placed blue tape over the company name on dozens of portable restrooms installed near the Capitol for the inauguration, the AP reports.

The company’s name is clearly visible upon close inspection, but is blocked for a wide-angle view by a TV or still camera. The inauguration will take place on the west side of the Capitol facing the National Mall. Portable toilets set up on the east side, near Senate office buildings, do not have taped-over logos. Don’s Johns says on its website that it has provided portable toilets for many large events in Washington, including the 2009 inauguration ceremony for President Barack Obama. The company’s logos were visible during that event. The Joint Congressional Committee on Inaugural Ceremonies and the Presidential Inaugural Committee had no immediate comment Friday.

A CRAPPER!  Gets NO better than that my friends. 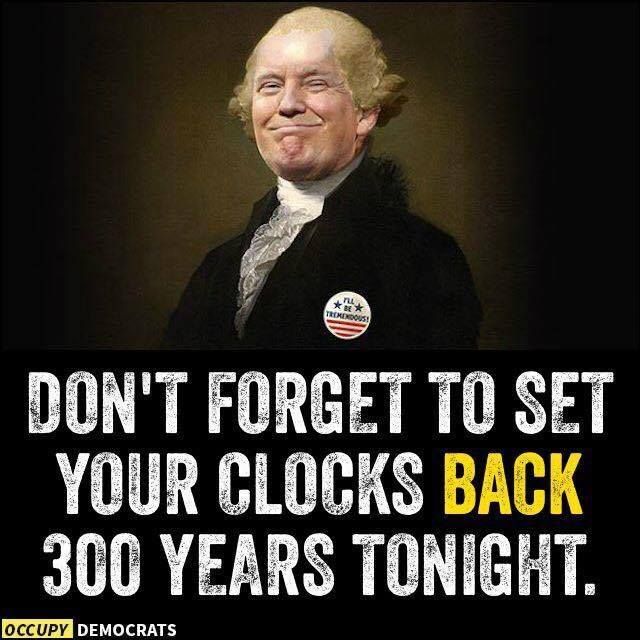 After 8 years of bitching and moan on the Right about Obama’s trips to Hawaii or golf or a number of other things…..mostly about him not doing his job as president I am wondering what the ass scratchers on the Right will have to say about this turn…..

The President-elect says he plans to do absolutely nothing for his first two days in office and that his “day one is gonna be Monday”.

Mr Trump explained this was because he doesn’t want his signing of orders to clash with the celebrations.

Let me see if I have this right….he is now president and the first order of business is to go on a mini vacation?

But if you think that those mental deficient that support Trump will see any problems then you are deluded….they will justify any and all situations with the simplest terms with insults to critics and mind numbing stupidity.

The day of the sheep approaches!

Tomorrow the US gets its 45th president and as usual the inauguration will be a spectacle and a tremendous waste of money and a total ostentatious theater of hedonism …but that is what we Americans do best…piss money away and love our glitz and crap.  Will I observe the farce?  Not on your life I have not done so in 40 years I do not expect to change my streak.

I do not expect more coverage this time around…….

On January 20—16 years ago—thousands of protesters lined the inauguration parade route of the incoming Republican president. “Not my president,” they chanted. But despite the enormity of the rally, it was largely ignored. Instead, pundits marveled over how George W. Bush “filled out the suit” and confirmed authority.

“The inauguration of George W. Bush was certainly a spectacle on Inauguration Day,” marvels Robin Andersen, the director of Peace and Justice studies at Fordham University in the 2001 short documentary Not My President: Voices From the Counter Coup.

Source: Why We Can Expect a Virtual Media Blackout of Protests Against Trump’s Inauguration | Alternet

It will be social media that carries the protests….MSM will give it usual quick reference and then move on to what celebs are kissing the ring of the newly crowned king…..the mindless part of this day will be highlighted…..over and over and……..it is what Americans crave…mindless crap!

Finally!  Something of interest in the news!

This news may not do anything for some people….but for me it is a welcome sight…..now I can spend my day doing what I do best….research!

MY regular readers know that I prefer to do research and not take someone’s word on subjects like international relations and intel gathering…..I spend many hours pouring over documents and such trying to get at the meat of a problem or situation……

Finally, the CIA has released a butt-load of previously classified documents giving me something to do for awhile……

It was a step toward greater transparency for one of the most secretive of all federal agencies. But to find out what the document actually said, you had to trek to the National Archives in College Park, Maryland, between the hours of 9 a.m. and 4:30 p.m. and hope that one of only four computers designated by the CIA to access its archives would be available.

But today the CIA posted the Castro record on its website along with more than 12 million pages of the agency’s other declassified documents that have eluded the public, journalists, and historians for nearly two decades. You can view the documents here.

Of course all this is heavily redacted but yet there could be a wealth of information within the documents….late nights and lots of coffee…..

I have my new years present!  Thank you CIA