For too long Jimmy Carter has been a running joke for the Repubs….I guess because their GOD Reagan won the election and saved the world from reason and logic.

Sadly, Carter may be the last statesman this country will ever have elected.  We pick our leaders now with faulty logic and slogans…..

Even have a party that thinks religion should be doled out by the White House….which means to me that freedom of religion is just a slogan for them not everyone. 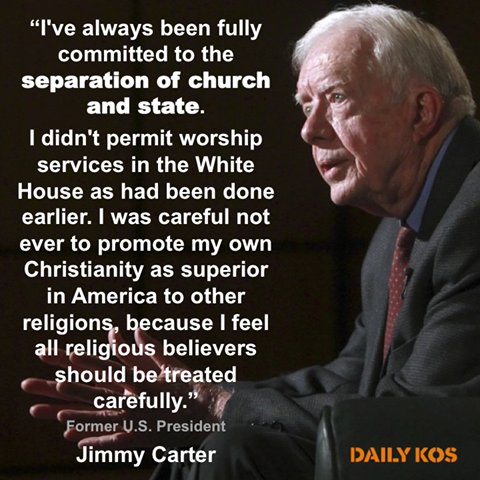 Personally, I think Carter was a good president…..that he had a very good outlook on foreign policy, which is sadly missing in today’s plethora of candidates.  He is the only ex-president that is giving back to the country not making money for their self-indulgences…..of all the recent presidents Carter has shown a desire to make America great and not worry about how big his wallet has become…..he should be an example for ALL Americans to emulate……but instead we get this current crop of wannabes…….how sad this has become.

10 thoughts on “Jimmy Carter: A Statesman”