This is a draft that I did not get to post in time…..this look at history may be a moot point.

1972 was the first time I voted for president…..I could have voted in 1968 but I was ass deep in mud in Vietnam and it just did not seem that important at the time. 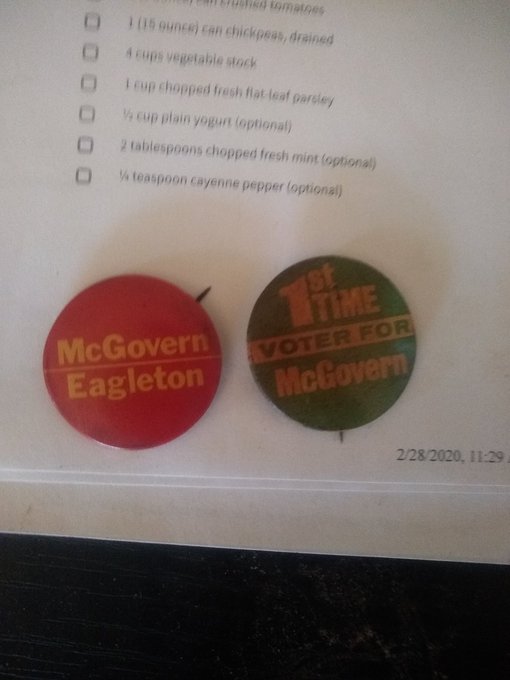 And yes I voted for George McGovern…..he was the antiwar candidate and a strong Left candidate…..and now Bernie is in the early lead could this be a repeat of 1972?

George McGovern broke my young bleeding liberal heart in 1972. Bernie, oh Bernie, do not disillusion us now the way George did then.

There I was in 1972, the ink barely dry on my journalism school diploma. Working as a baby reporter at the Utica, NY, Observer-Dispatch. My generation didn’t have a letter of the alphabet, no Gen X or Y or Z, not even A, B, or C. But we were so sure we were special. And empowered. We’d shut down the nation’s universities in a general strike. We’d created and enlisted in the anti-Vietnam War movement. Those of us who didn’t get drafted. Or killed.

In 1972 the archetype of evil, Richard Nixon, was running for reelection as president. We felt as warmly toward Nixon then as we adore Trump now. Trump is nothing new for us, just something more.

My introduction to presidential politics had been in 1968, when Nixon came to Syracuse as part of the launch of his presidential campaign. I encamped at a table outside the hall where he was to speak, playing Simon & Garfunkel’s Sounds of Silence nonstop for 12 hours. At full volume. That song haunts me yet. In my innocence I was sure I went a long way toward mobilizing opposition to Nixon’s perfidy.

Bernie is taking on the establishment Dems, the Corporatists, the way that McGovern did in 1972….again is this deja vu?

It’s a perfect time to recall a famous quote from one of the nation’s foremost philosophers, Yogi Berra: Its “déjà vu all over again.”

Sanders vs. the Establishment Democrats: McGovern All Over Again?

Bernie is not my candidate for I do not consider him as antiwar….but I will support him if it comes down to it because the rest of the Dem field are owned by the M-IC and cannot be counted on to end our endless wars.

It is fascinating the freak out by the establishment who went all in for Biden and he has sorely let them down….now they are jumping on the Bernie bashing bandwagon with more fervor than before.

Like I wrote…this look back may be a moot point after Super Tuesday…..I just could not waste a good draft…..