With all the yelling, debate and screaming about the birthright cancellation that the President has stated….I have one thing to say……

I say fine but start at the top. 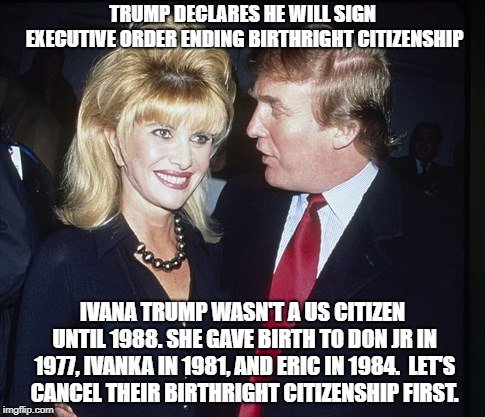 Of course this is not the same thing……that will be the tale they tell….

This is a continuation of the series written by Maj.  Danny Sjursen about the history about this country …the creation, the war, the battles, the history.

It is the 1780’s and the war is winding down and then Founding Fathers are looking to the creation of a government to run the land that just liberated from England.

Part 7 of “American History for Truthdiggers.”

The Brits Are Gone: Now What?

“The evils we experience flow from the excess of democracy. The people do not want virtue, but are the dupes of pretended patriots.” —Elbridge Gerry, delegate to the Constitutional Convention (1787)

It has become, by now, like American scripture. We all know the prevailing myths, history as written by the winners. Virtuous American patriots, having beaten the tyrannical British, set out to frame the most durable republican government in the history of humankind. The crowning achievement came when our Founding Fathers met in Philadelphia in 1787 to draft an American gospel: the Constitution. The war had ended, officially, in 1783.

Damn!  This is good stuff….I hope all are enjoying this look at American history….a look that your textbooks have left out for various reasons.

President Trump said Wednesday the number of military troops deployed to the US-Mexican border could reach 15,000—roughly double the number the Pentagon said it currently plans for a mission whose dimensions are shifting daily, per the AP. The Pentagon said “more than 7,000” troops were being sent to the Southwest border to support the Customs and Border Protection agents, and officials said that number could reach a maximum of about 8,000 under present plans.

That about equals the troop deployment we have an actual war zone, Afghanistan……

There may be more to worry about than some bare foot walkers…….While the president is using the troops as a political prop word has come out from China….

“It’s necessary to strengthen the mission … and concentrate preparations for fighting a war,” Xi said. “We need to take all complex situations into consideration and make emergency plans accordingly. “We have to step up combat readiness exercises, joint exercises and confrontational exercises to enhance servicemen’s capabilities and preparation for war” the president-for-life added.

Maybe the military would be better used to counter the possibility of an actual threat.

The truth of the matter after looking at policies, slogans and issues then the answer is…they have NOTHING to offer me….

Chants of “No More War” from delegates at the 2016 Democratic National Convention gave voice to sentiments that still resonate through the base of the party and the broad U.S. public, notably in communities with higher rates of military sacrifice.

While Trump’s 2016 victories in swing states may well have been aided by his posing as a foe of protracted war, his administration’s Mideast policies have largely exposed that masquerade. Unfortunately, the weak and confused positions of Democratic leaders on endless war and bloated military spending offer little alternative to war-weary voters.

Polls show the popularity of a progressive domestic agenda on issues from jobs to healthcare to free public college, but few Democrats in Congress are willing to strongly challenge the unaccountable military budget, which soaks up most discretionary spending that could be redirected toward the party’s proclaimed domestic agenda. By Obama’s last year in office, overall “defense” spending was higher (adjusted for inflation) than “at any point since World War II,” according to Peter Beinart (“The Democrats Keep Capitulating on Defense Spending“) – and significantly higher than during the Vietnam War.

Like I have said….the election is just days away and I have NO candidate in mind that I can support….they are all big money warmongering toads.

I have little respect for a society that has all but forgotten that we are at war in many countries and our troops are in danger to keep the M-IC afloat……there is something wrong to put war out of mind is a sign of a defective society.

Beyond the war thingy….Dems are still really screwed…they come up limp dick slogans and half baked ideas…..

It’s always been fascinating (and revealing) how people regard the core beliefs of our two major political parties. Not how they themselves vote, which is boring, but how they go about articulating the differences between the two parties when asked to do so.

Granted, there will always be those who insist there’s no real difference between Republicans and Democrats, that both parties are worthless, etc. But because we’ve had two separate parties for more than 150 years, there have to be certain basic, fundamental, differences between them, at least in principle, otherwise we wouldn’t have two of them.

Try again Dems you are falling far short of a workable party….we are screwed…..

My daughter knowing that I am a Boomer blames my generation for a lot of the problems….she made me a banner…..

THANKS FOR NOTHING BABY BOOMERS!

She knows that it does not mean me….for she knows how I have voted over the decades…..but she is right Boomers f*cked up society and we are now paying for that f*ck up……all in the name of Me, Me, Me………

We have less than a week before a historic mid-term election and we have experienced bombs, mass shootings, etc and what brings this on?

There are a couple of articles that touches on these subjects a bit……like it or not…this is Trump’s America…..

Donald Trump, the American president, has fomented violence against liberal opponents and critics who disagree with his policies, and so-called “fake news” media organisations he regards as the “enemy of the people.”

With pipe bombs mailed to some of the political targets he has singled out for retribution – several high-profile Democratic Party politicians, including two former US presidents, a liberal billionaire philanthropist and a major news organisation – Trump is the most prominent inciter of violence and facilitator of right-wing American domestic terrorism.

These right winger extremists are stalking America…..and the rhetoric from the White House is not helping…..

Four of the Saturday worshippers brutally murdered at the Tree of Life synagogue had been old enough during the Holocaust and the second world war to revere America as a safe haven in a world of hate. The other seven victims, the youngest of whom was 54, had grown up in a land where most blatant antisemitism had seemingly retreated to the shadows.

When pipe bombs were mailed to a dozen targets of Donald Trump’s wrath, the only frail consolation had been that no one had been injured. Now with the worst incident of antisemitic violence in American history all comfort has vanished.

I read an excellent question after the weekend of death …….

If there is one thing the massacre at a Jewish synagogue, the pipe bombs mailed to leading Democratic party figures, and the racist violence that claimed the lives of two African-Americans in a Louisville Kroger store last week show, it’s that far-right and racist extremism are serious threats in the United States. Though law enforcement took swift action towards investigating and prosecuting those accused of carrying out these attacks, it is not clear the US federal government is taking this threat as seriously as it should.

Since the September 11, 2001 attacks, the US has devoted enormous energy and resources towards countering threats posed by those accused of affiliation with extremists associating themselves with Islam both in the US and abroad. When US officials seek greater surveillance authority, they also frequently do so by emphasizing threats they say are posed by Muslims.

Personally, the events in the past 2 years is not the United States that I pledged to protect from all enemies foreign and domestic….and anyone that is not disgusted by the events then they are not the “patriot” they pretend to be.

But that is my opinion…..those articles are not mine and reflect the opinions of the authors…if you disagree do not tear into me contact the people in person…if you have the spine.

Sometimes the US sets examples for the world to emulate and the world prospers…and sometimes that emulation turns sour and the ugliness of the US foreign policy peeks through.

The Yemen conflict is one of those examples….after years to total devastation of the country of Yemen the Saudis have invaded…..

The Saudi-led invasion of the vital Yemen aid port of Hodeidah has been slow going, and that’s fueled a lot of complaints from aid groups about the disastrous consequences of them taking the city. This has the coalition planning a major escalation.

Official are now saying that more than 10,000 additional troops will be sent against Hodeidah, both trying to shore up parts of the province already captured, and starting a new offensive against the city itself “within days.”

This new force is going to be heavily built around the Sudanese military, which has just recently dispatched thousands of troops to join the war. Sudan was part of the Saudi-led coalition from the start, but this is their first major involvement in the ground war in Yemen.

Hodeidah is the only aid port under the control of the Houthi movement, which controls about half of the country. The port is the lone source of food imports for about 70% of the country, and the fall of the city is expected by many to turn the country’s chronic malnutrition into a famine impacting millions.

The US has stood by and allowed the Saudis to create a humanitarian crisis on the Peninsula…Hell we even supplied the Saudis with their weapons of destruction without saying a word about their barbarity.

Tuesday marked a significant shift away from the US government’s several years supporting the Saudi invasion of Yemen. Secretary of Defense James Mattis is now demanding an immediate ceasefire in Yemen, and peace talks within the next 30 days.

Secretary of State Mike Pompeo also demanded that the Saudis and UAE completely cease airstrikes against populated areas. This is a long time coming, as those airstrikes have killed thousands of civilians.

The goal, it seems, is to set up a “solution” to the conflict at some point in November, when all factions would meet in Sweden. The US is not saying what this “solution” would look like, but previously the peace talks have collapsed more or less immediately, based on demands that any resolution involve the total disarmament of the Houthi movement, and the Saudi-backed factions returning as unquestioned rulers of the entire country.

On a side note…..remember when that journalist was murdered by the Saudis and the President said that we owe the Saudis so much because of the massive arms deals?

In reality, arms companies have been freely admitting this is false. The official line is that some jobs will “probably” be created by the deal. When they’re asked for estimates, the major arms-makers put the figure around 500, not 500,000.

It is the act of a hollow little person that puts a price tag on human life.