My Sunday and cooler weather it is enjoyable……maybe enjoy some fruit and nuts in the garden….speaking of nuts…….

Did you know there was a great cashew riot?  We have seen all kinds of riots…race riots, Zoot Suit riots, even some milder form of food riots…..but a nut riot?  A Cashew Riot?

In 2013 the shortage of cashew nuts led to about 20 farms being burned down…….well it is happening again….the problem is so severe that the army has been put on call…..

Traders have been given a Monday deadline to buy crops from farmers at an approved price, and not below.

If this does not happen, Mr Magufuli said he will send dozens of military trucks to collect the entire crop.

Cashew nut exports are a major foreign-currency earner for Tanzania.

Farmers have for weeks been refusing to sell their harvests, arguing that the private traders’ offers are too low.

On Saturday, Mr Magufuli accused traders of attempting to rip off thousands of farmers and ordered them to increase their price offers to around $1.3 (£1; €1.15) per kilogram (2.2 pounds).

The president says he is working to ensure thousands of farmers get a fair price for their cashew nuts and also so that the country does not miss out on vital export earnings.

That is right…..cashew riots are possible…..I love my cashews but I do not think I could riot over the lack of them….but then I do not depend on a harvest now do I?

Enjoy the rest of your weekend…..we will pick up where we left off Friday come Monday morning…..

Be well, be safe!

I begin my Sunday with a think back……to the days of high adventure……..

In my younger days I read Agatha’s murder mystery about the train ride and later a James Bond thriller was set on the train…it look amazing and wanted to indulge myself when I was older….before I could finish school and get a job the original train ride was ended….much to my disappointment.

For those that did not remember this iconic train ride a little history….

The Orient Express referred to here and shown in these photographs was the real Orient Express, the actual true descendant of that first Express d’Orient that left Paris in October 1883.  It was a normal scheduled EuroNight express, run by the Austrian national railways (ÖBB), and you could travel on it with normal tickets including InterRail and Eurail passes.  Until 8 June 2007 it left Paris every evening at 17:16 and arrived in Vienna at 08:30 next morning.  From June 2007 onwards you needed to leave Paris around 17:54 by high-speed TGV train to connect with the Orient Express at Strasbourg.  The Orient Express left Strasbourg at 20:37 and arrived in Vienna at 06:40 next morning.  You can still travel from Paris to Vienna or Budapest by train today, see here.  You can trace the history of the train pictured above from one year’s railway timetable to the next all the way from 1883 to 2009, so the pedigree of this train is quite genuine – more so than either of the two expensive tourist trains of restored vintage rolling stock claiming to be the Orient Express (the Venice Simplon-Orient-Express and the Nostalgic Orient Express), beautiful though they are.

The photographs above show the real Orient Express about to leave Strasbourg for Vienna in summer 2009.  The photos below date from around 2005 and show the Orient Express before being cut back to Strasbourg, about to leave Paris Gare de l’Est.  The gentleman is boarding the Paris-Vienna sleeping-car, which was staffed by an attendant from Newrest, a modern subsidiary of the Compagnie Internationale des Wagons-Lits (CIWL), the company that operated the original Orient Express from its inception.  However, since 1971 the Wagon-Lits Company has simply staffed sleeping-cars as a contractor instead of owning and operating the sleeping-cars in their own right – they provide the sleeper attendant, room service catering, bed linen, etc. for all ÖBB’s sleeping-cars and continue to do so for ÖBB’s current Nightjet trains.  The coach to the right marked liegewagen is one of the two modern Austrian Railways couchette cars, also as it happen staffed by the CIWL, or strictly-speaking, Newrest.  The right-hand photo is a close-up of the destination label, clearly announcing the train as the EuroNight train Orient Express.

The route of the Orient Express……

Plus the Smithsonian has taken up the history of this icon train ride…. 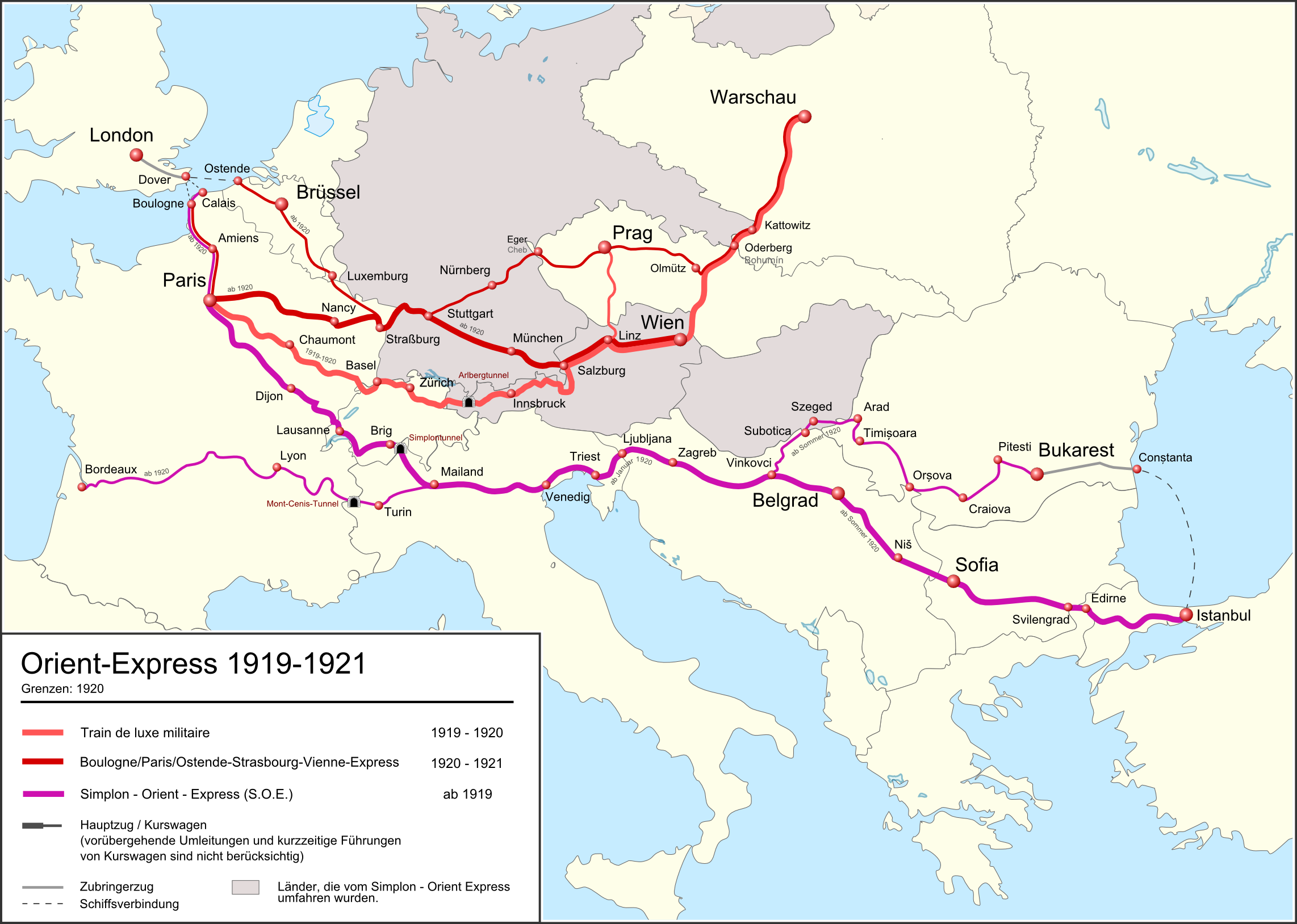 Let’s get one thing clear. There isn’t, and cannot be, any such thing as the ‘original’ Orient Express, for a very good reason. Take air travel. Suppose there’s a British Airways flight to New York called ‘Flight BA123’. Is there an actual unique aircraft called ‘Flight BA123’? Of course not. ‘Flight BA123’ is a abstract concept, a service, a departure, something which appears in the timetable, in the reservation system and on your ticket. BA own a whole fleet of whichever type of aircraft is required to operate flight BA123 to New York, and any of these might be used to run that flight on any given day. And if flight BA123 existed in the timetables 30 years ago, I bet it would have been operated with different design of aircraft than it is today. So it is with the Orient Express. It was and is a service, and not a particular set of rolling stock. In any case, it would have used different rolling stock at different periods in its history, and at any given time it would have required several sets of rolling stock to operate. Think about it – in its heyday in the 1930s, it ran daily from Paris to Istanbul, a journey that took three nights. On any given night, there must have been one Simplon Orient Express leaving Paris, another on its second night out from Paris, a third approaching Istanbul on the last night of its journey, and another three Simplon Orient Expresses travelling in the other direction towards Paris. So there must have been at least six sets of rolling stock!

The days of high adventure my be over but the memory remains.

Time for me to close down and enjoy a lovely Saturday and I hope that you may do the same.