Our Fearless Leader has addressed the troops on this T’Giving Day and it will make you puke.

U.S. President Donald Trump gave a bullish Thanksgiving address to troops overseas on Thursday, hailing progress in Afghanistan and against ISIS, and telling them they were fighting for “something real,” including a stock market at record highs and his promised “big, beautiful fat tax cuts.”

Speaking in a live video teleconference from Palm Beach, Florida, with military personnel serving in Afghanistan, Iraq and elsewhere, Trump told them they were “very, very special people.”

He called troops in Afghanistan “brave, incredible fighters” who had “turned it around” in the past three to four months.

We opened it up; we said go ahead, we’re going to fight to win,” he said. “We’re not fighting any more to just walk around, we are fighting to win.”

Trump told the troops they could look forward at home to the benefits of “big, beautiful fat tax cuts,” a stock market at record highs, jobs and economic growth.

Trump said he had told the troops overseas the country was “doing great,” thanks to his cuts in “regulation and all the waste and all the abuse.”

“I told them … you folks are fighting so hard and working so hard, and it’s nice that you’re working for something that’s really starting to work.”

Not a speech to the troops that are away from their loved ones fighting in whatever worthless war they are fighting…..

This was a goddamn campaign speech….but if he had ever served his country he would know this was a worthless waste of time.

I would like to wish all my loyal readers a very happy Thanksgiving Day….may you have all the joy of the day.  I will be cooking the turkey injected with pomegranate juice and my special dressing (secret recipe)…..then going to daughter’s house for the meal…..

This will be my last post today so that I may spend it with family for some food food and conversation…..my granddaughter and I will sit down together and hash over the events of her life so far this year and then I will challenge her to a game of Scramble.

I would like to thank all my readers and followers for their time and comments….especially to thank them for their outpouring for love and concern over my health issues……your time has made my recovery all that more easier….and this blog has given me a reason to look on the bright side of my condition, if there is such a thing.

I can never thank my friends enough for their support during this time…..please have a great day and some good food and fun with the family.

Thanx for everything and I shall be back tomorrow with more stuff…..love and peace….and enjoy your day and your special meal…..chuq

And you thought you would get off easy because it is a holiday…..but no the mad professor is still writing and posting about history……

And NO this is not about the first Thanksgiving…..it deals with something I write a lot about….war.

Happy Thanksgiving from War on the Rocks!  Today is all about tradition: turkey and stuffing; family, friends, and football.  From early childhood, we all learn the origin story of Thanksgiving that is so mythically central to its celebration.  Pilgrims in Plymouth Colony marked a successful harvest with a feast to which they invited Native Americans who had lent much-needed assistance after the previous hard winter.  Records of earlier harvest celebrations and debates (google “thanksgiving origins” if you’re interested and have hours to kill) about the actual provenance of what would become our Thanksgiving aside, it is no surprise that the centuries-long history would make it the holiday most steeped in uniform tradition across America.

But how did thanksgiving become Thanksgiving?  The first recognition of a single, nationally celebrated holiday of Thanksgiving came in a proclamation by the Second Continental Congress in 1777, a year after it signed the Declaration of Independence.  It came as our young country’s future was far from certain, and was indeed issued from a temporary meeting site because the national capital of Philadelphia itself was then occupied by British forces.  The language was marked by its central theme of gratitude for American forces’ successes, thanking God,

See that did not hurt so bad……with this bit of history under your belt now go enjoy a meal and have some fun…..chuq

Just a little something to think about…LOL

If you have no place to go for your T’Giving dinner then maybe a trip to Taco Bell would be to your liking….a little something special for the holiday.

I do not know how accurate this menu is but it rings of T/Giving spirit…. 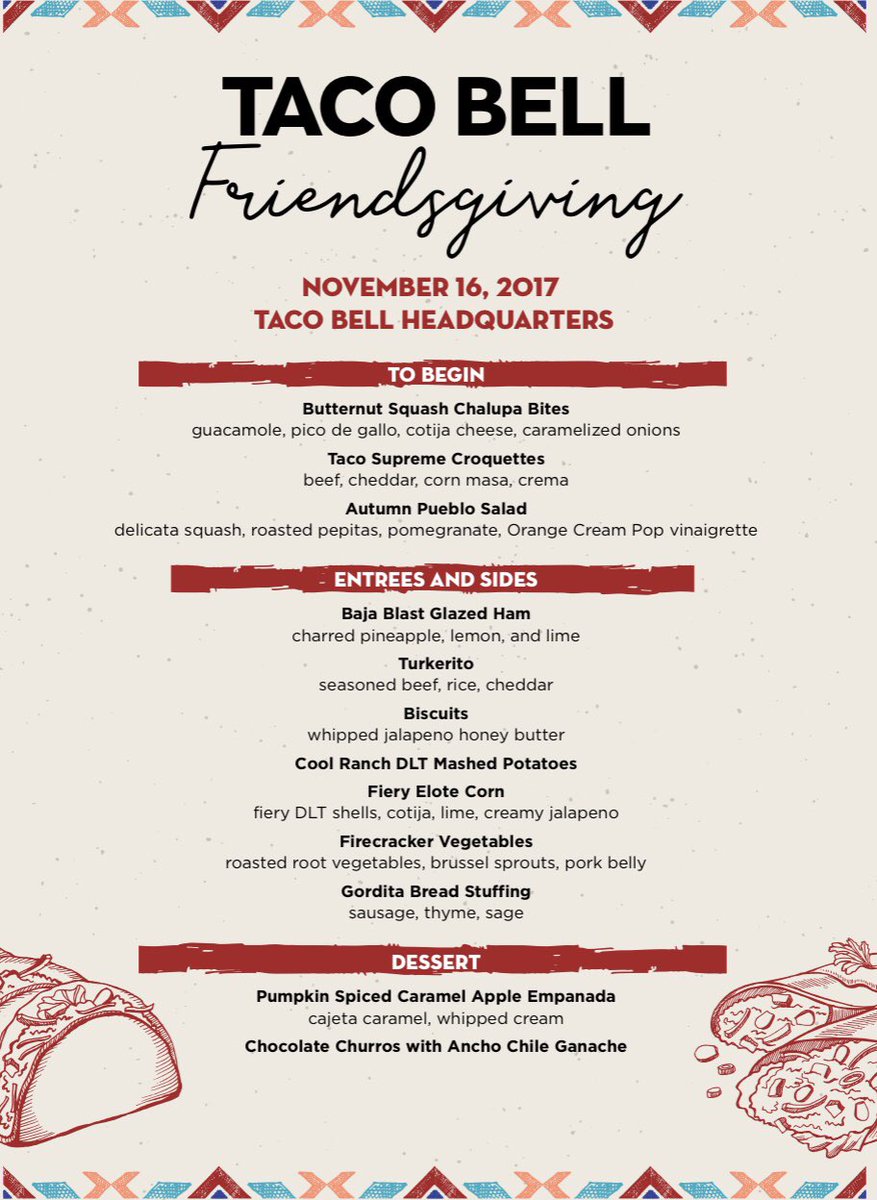 I think this could be an experience worth the effort….that if you have no family waiting to dazzle you with brilliance over the T/Giving meal……or it could be a gastronomical nightmare after all it is fast food outlet.

It is T’Giving and I normally try to not post too much serious stuff…..I try to have a good quiet day with family and friends…..but I read this piece and immediately a WTF came out of my mouth….then I uttered my usual retort….”the Rat Bastards”!

What do you have to say?

We all know how just barbaric the group ISIS is…all the violence, beheadings, torture, rape, on and on….and we have been told that they have lost the battle for their “capital;” Raqqa….the group is on the run looking for a good place to make their last stand….as it were….

were they permitted to leave Raqqa in convoy with the Us and Britain and the Kurds providing cover for them?

About here a normal  person would ask just what the Hell I am talking about….let me give you the skinny as reported by the BBC……

The BBC has uncovered details of a secret deal that let hundreds of IS fighters and their families escape from Raqqa, under the gaze of the US and British-led coalition and Kurdish-led forces who control the city.

A convoy included some of IS’s most notorious members and – despite reassurances – dozens of foreign fighters. Some of those have spread out across Syria, even making it as far as Turkey.

Lorry driver Abu Fawzi thought it was going to be just another job.

He drives an 18-wheeler across some of the most dangerous territory in northern Syria. Bombed-out bridges, deep desert sand, even government forces and so-called Islamic State fighters don’t stand in the way of a delivery.

But this time, his load was to be human cargo. The Syrian Democratic Forces (SDF), an alliance of Kurdish and Arab fighters opposed to IS, wanted him to lead a convoy that would take hundreds of families displaced by fighting from the town of Tabqa on the Euphrates river to a camp further north.

The job would take six hours, maximum – or at least that’s what he was told.

Now you may ask is WTF is going on with this ISIS bunch and the rest of the world?

Just to make things interesting there is a bit more about this situation……this piece is from the Unz Review…..

Americans have been living in a country that has not known peace since 9/11, when President George W. Bush and his posse of neoconservatives delivered the message to the world that “you are either with us or against us.” The threat was coupled with flurry of hastily conceived legislation that opened the door to the unconstitutional “war on terror” carried out at the whim of the Chief Executive, a conflict which was from the start conceived of as a global military engagement without end.

Bush and his handlers might not have realized it at the time but they were initiating a completely new type of warfare. To be sure, there would be fighting on the ground worldwide against an ideologically driven enemy somewhat reminiscent of communism, but there would also be included “regime change” of governments in countries that were not completely on board with the direction coming out of Washington. Instead of invading and occupying a country in the old-fashioned way, so the thinking went, far better to just knock off the top levels and let the natives sort things out while acting under direction from the pros in Washington.