As my last post of the day….I will venture into the world of Formula One racing…..it is my guilty pleasure….I spend so much time researching and analyzing that I need something to break my days up….Formula One is just that time for me to sit back and enjoy.

This post will not have usual informative stuff…this one is a personal thing that I need to write about…..

From a very young age when I was living in Europe I became a fan of Formula One racing….especially Team Ferrari……those were the days when their were no sponsorship except for the company that built the car and NO multi-million dollar driver contracts……

The was 1960 and Ferrari was all the rage on the tracks….my driver of choice was Wolfgang von Trips….and no he had nothing to do with the “Sound Of Music”….he was an excellent driver and in 1961 he was in the lead in points for the World Championship with he was killed at the Italian Gran Prix at Monza…..while my driver was gone I never wavered from Team Ferrari and am still rooting for them……….

Now that brings us to this year…..Ferrari is playing second fiddle to Mercedes as it has for a couple of years and I have been beside myself….is it the car….or the driver…or the massive amount of technology…..maybe it is the constantly changes rules of the race…..anyway it is disconcerting to me…..but it will NEVER make me jump ship from Ferrari.

Now it brings me to yesterday’s race, 2016 Spanish Gran Prix……

Now for the #GoingMercerdes……one the first lap the two Mercedes drivers tried to be cute and took each other out of the race completely…..giving the win to Red Bull and Ferrari finishes second and third……

Needless to say I was laughing my ass off and the rest of the race was good but just the fact that the ego idiots could not let their egos go they ruined the chance for Mercedes to have a sweep of the Gran Prixs which has NEVER been done in the history of the sport.

So I am trying to start a trend for now on when teammates screw the whole team because of egos it should go down as #GoingMercedes.

(Sorry I cannot provide shots of the wreck…..copyrights and all that shit)……but if you would like to read about the wreck…..

In case you are wondering…….I am still laughing my ass off……that was one of the most bone head moves I have ever since in all my years of Formula One….

It seems that the world is at war….not necessarily a world war but rather a bunch of small conflicts that do not seem to make much sense…..but in a grand scale it makes perfect sense……we have a global military (NATO) and a whole bunch of non-governmental organizations (NGOs)….that are roaming the planet looking for fresh sources of conflict….

The British Empire didn’t just have a fleet that projected its hegemonic will across the planet, it possessed financial networks to consolidate global economic power, and system administrators to ensure the endless efficient flow of resources from distant lands back to London and into the pockets of England’s monied elite. It was a well oiled machine, refined by centuries of experience.

While every schoolchild learns about the British Empire, it seems a common modern-day political malady for adults to believe that reality is organized as their history books were in school – in neat well defined chapters. This leads to the common misconception that the age of imperialism is somehow a closed-chapter in human history. Unfortunately, this is far from the truth. Imperialism did not go extinct. It simply evolved.

We have to admit that the election of 2016 is anything but normal….it has gotten damn right wacky.  So wacky that I am tuning most of it out.  There is only so much manure can be spread before my eyes glaze over and I turn to more interesting events and situations.

I have been looking for some historical perspective much to the chagrin of my readers….in the past their have been outsider candidates, convention fights and the atypical candidate…….and then I found a good piece in Consortium News….sure saved me a lot of headache trying to write something…..

Longtime observers of American politics have noted striking parallels between the unpredictable wartime election of 1968 and the bizarre presidential contest of 2016, another time of war and distress, as Michael Winship recalls.

For those too young to remember, imagine: As fighting in Vietnam rages on and the Tet Offensive makes us all too aware of the futility of our Southeast Asian military fiasco, Minnesota Sen. Eugene McCarthy decides to run as an antiwar candidate against incumbent President Lyndon Johnson.

Ya see….there can always be a historical perspective…..DAMN!  I love this stuff.

This country is always having a debate about taxes….do we need more….or maybe it should be less…..In reality if people would pay attention to where their taxes go I think the conversation would change considerably….

If you are one of the lucky few that makes $50,000 a year your taxes can be broken down thusly… 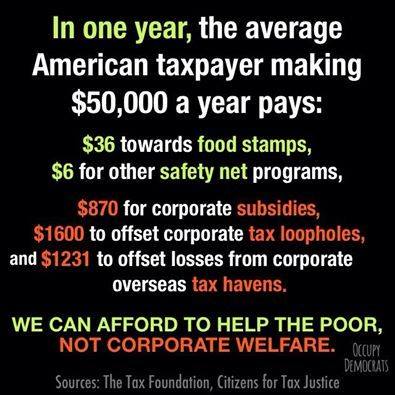 For about a year Saudi Arabia with the help of the US has been bombing the crap out of a small country called Yemen.

The most popular reason for this “war” is that the Sunni Saudis were concerned about the rise of the Shia Houthi militias….once the Houthi started having success against the government of Yemen the Saudis felt they had to intercede to protect themselves and the Holy Shrines of the peninsula…..and the only way to do that was to start an all over invasion of the country….but mostly through an air campaign…..

After a year….the Houthi are still fighting and the only major deaths have been those of Yemeni civilians….

But is there more to this war than the protection of some sites?

A recent PBS report about the war in Yemen exposed the secret connection between the U.S.-Saudi alliance and Al Qaeda, a reality that also underscores the jihadist violence in Syria, writes Daniel Lazare.

PBS Frontline’s “Yemen Under Siege,” which aired on May 3, makes for powerful viewing. A first-hand look at the devastation that the U.S., Saudi Arabia, and other powers have visited on one of the poorest countries in the Middle East, the 35-minute documentary shows families struggling amid the rubble, children dying from mortar attacks, surgeons operating without anesthesia, and other such horrors.

But the most important revelation comes almost as an aside. Interviewing pro-Saudi fighters near the central Yemeni city of Taiz, journalist Safa Al Ahmad suddenly hears shouting. “What’s wrong?” she asks. “Who are they? They don’t want me to be here?”

Source: The Secret Behind the Yemen War – Consortiumnews

The US is choosing sides in a religious argument…..this may not be the best way to use our foreign policy.

I love to use the 4 most beautiful words in the English language…..”I told you so”…..

I have written en op-ed for my friends at Legationes about the region in question…..which is a paper that I researched several years ago……and it is good to see that my predictions are getting close to realization…..well not good but rather interesting……(read more)…..

There is a theory in international relations called the linchpin theory….basically, it is an occurrence, a small occurrence, that could explode into a society ending situation……a couple of good examples are WW1 and the Arab Spring…..

Source: Looking for the linchpin – Legationes

By Brandon Turbeville Regardless of which side you choose to listen to in the Armenian/Azeri conflict, one thing everyone can agree on is that the ceasefire is not holding. The regularly ignited di…

The events in this situation are starting to accelerate…..the question is….how much damage will this event do?  Could this becoming a wider conflict?  Will the major powers become involved?

Could this be the linchpin I have been looking for or is it just a minor thing that will get worked out in the end?