Once again the news from the war that the media seems to want to ignore…..to make it clear…I am talking about the mainstream media….you know the place that most Americans get their info from nightly…….

An American service member died of a non-combat injury in Iraq on Friday, the Pentagon said.

Lt. David A. Bauders, of Seattle, died on Al Asad Air Base in Iraq. He was assigned to the 176th Engineer Company, part of the Washington Army National Guard.
The death comes days after Navy SEAL Charles Keating IV was killed in a mission to rescue a team of less than a dozen U.S. military advisers who came under attack Tuesday from more than 100 ISIS fighters.
Keating was the third American military member to die in combat in Iraq since the United States began fighting ISIS there in 2014.

American intervention in yet another country in armed conflict…….another war and more money wasted….

U.S. troops have been on the ground in Yemen for about two weeks, the Pentagon revealed on Friday.

The special operations troops are supporting Yemeni, Emirati and Saudi troops against al Qaeda militants near the city of Mukalla.

Davis said the U.S. is providing a “small number” of military personnel, as well as medical, maritime and intelligence support to the forces, who are fighting al Qaeda in the Arabian Peninsula (AQAP), al Qaeda’s branch in Yemen considered to be the group’s most dangerous.

It’s not the first time U.S. troops have been in Yemen.

Special operations forces operated in the country last year, before they were evaculated after Houthi rebels supported by Iran unseated President Abed Rabbo Mansour Hadi from the capital in Sana’a in March 2015. Hadi’s government is now based in Aden.

Davis said the troops now in Yemen would help advise the Arab ground forces and assist with operational planning.

Davis also confirmed that the U.S. has conducted four airstrikes against AQAP fighters since April 23, killing 10 militants and wounding one.

The US is already deploying troops in 100+ countries……but could we do more?

The United States is announcing its support for a set of principles that give a green light for U.N. peacekeeping troops and police to use force to protect civilians in armed conflicts.

U.S. Ambassador Samantha Power told a high-level U.N. meeting Wednesday focusing on the responsibility to protect civilians that the United States was “proud” and “humbled” to join 28 other countries that have pledged to abide by the 18 pledges.

“The Kigali Principles are designed to make sure that civilians are not abandoned by the international community again,” she said, recalling how U.N. peacekeepers left Rwanda before the 1994 genocide and Srebrenica before the 1995 massacre.

Will this open up the chances of more US troops in conflicts around the world?  The next question is….how about the problems in Palestine?  Are those civilians worth protection?

Speaking of all of America’s “small wars”…….

President Barack Obama is increasingly calling upon Special Operations forces to carry out so-called “small wars” across the Middle East and Africa.

Another edition of my “Battlefront Diary”…..the news that is seldom reported…..stay tuned….more on the way.

Well sports fans looks like the teams for the November big dance is set……and all pundits seem to think it will be ugly to the max……I mean we have the two most disliked candidates……the question is will it be the ugliest ever in our history?

Well history tells us that it may not be the ugliest one ever….(and yes there will be a historical perspective…..save the whining for later)…..

NO!  Not our beloved Tom!  Is there nothing sacred?

Source: Will the Trump-Clinton Taco Bowl be the ugliest election ever? Maybe not—but it could be close – Salon.com

This will be interesting to observe……I cannot think of two more “ugly” candidates than the two presumptive ones of today…..this election should give all bloggers something to rant about and increases their viewership….something we all strive for every day.

I met with a friend of mine over coffee….Elmo….we have known each other since high school…..we did not run in the same circles….he was a conservative racist redneck and I was the “pinko, Commie” of the class…..we met and got caught up for we had not talked for about 6 months….and then he started with the political stuff…..knowing that I would not agree with him on much…..personally I think he does this just to get his blood pressure up before he goes to the doctor so he can blame me for all his ails.

Elmo started spouting his concerns that the country was moving to control gun ownership……I had to ask him to provide me with proof of his statement….of course he went on about Obama this and Obama that…but as usual there was plenty of bitching and name calling but little proof.

I asked him if he could remember the late 60’s early ’70’s……and ask if he remember Reagan and the Mulford Act…..he got agitated and ask what that had to do with what he was saying…..

(This is where I insert my typical historical perspective….you are welcome) 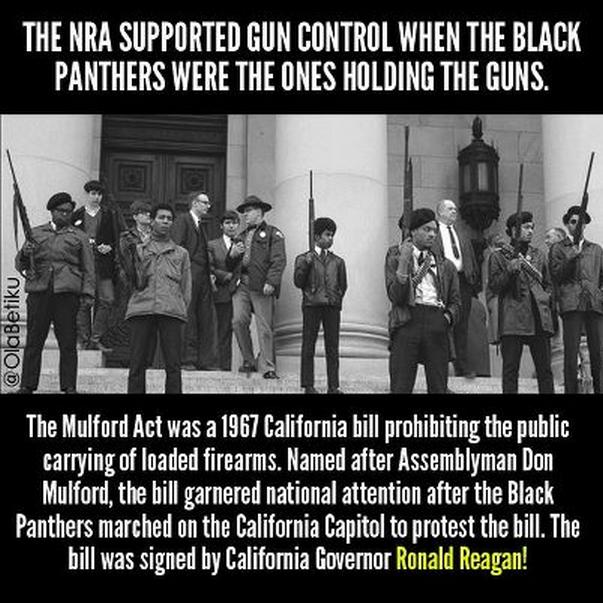 The Mulford Act was proposed by a California representative because of the Black Panthers call to arms…..it would later be called the “Panther Law”….

The Mulford Act was a 1967 California bill which repealed a law allowing public carrying of loaded firearms. Named after Republican assemblyman Don Mulford, the bill was crafted in response to members of the Black Panther party conducting armed patrols of Oakland neighborhoods while conducting what would later be termed copwatching. They garnered national attention after the Black Panthers marched bearing arms upon the California State Capitol to protest the bill.

Republicans in California supported increased gun control. California Governor Ronald Reagan was present when the protesters arrived and later commented that he saw “no reason why on the street today a citizen should be carrying loaded weapons.” and that guns were a “ridiculous way to solve problems that have to be solved among people of good will.” In a later press conference, Reagan added that the Mulford Act “would work no hardship on the honest citizen.”

Well Elmo gave me a typical rebut to the historical perspective……that was another time….things are different now.

I replied that it did not matter the date….that it was the most strict gun control law of the US and it was signed into law by one Ronnie Reagan…..I believe he was a Republican back in those days…..right?

Elmo then gave me another typical answer…..”you want be so smug when they come get your guns.”

I then said….”they have been coming for them for the last 30 years and they must have stopped to go through the drive-thru because they have not made it yet.”

“And I am still awaiting for that all out race war that you predicted back in high school”.  Then I asked….”Just what in Hell are they wanting for?”

Our short reunion ended the way it always ends…….Elmo pissed off to the max and ranting in four letter words and storming off……

I guess it will be another 6 months before we have our coffee and get caught up.

As a student of conflicts and the Middle East I recall back in 2013 when the president drew a line in the sand for Assad and after all the polling most Americans said NO to attacks on Syria……but by mid rear of 2014 the tone was changing….but just how did this tone of opinion change?

If you would like to see how this works then find some articles from the first Iraq War and read how the “dangers” changed with the media reports……the selling of war……how disgusting is that?

From Classrooms to Killing Fields

In 2013, American and British public opinion said “hell no” to plans to bomb (and surely regime change) Syria, taking the momentum out of the march to war. This marked a peak in post-Iraq war-weariness. But then in August 2014, many hearts were touched by the plight of a group of Yazidis trapped on a mountain and besieged by ISIS. So public opinion sanctioned a humanitarian military rescue. During the operation, it was revealed that the crisis was blown way out of proportion, as excuses for war so often are.

Source: How Schooling Leads to War – Antiwar.com Original by — Antiwar.com

When Obama nominated Chuck Hagel as SecDef I was very pleased…..for one, he and I served in the same unit in Vietnam and two, he was a sergeant in the Army…..for me that made him more than qualified because he was not some bureaucrat that spent his time behind a desk and never tasted what war feels like close up…..plus I was disappointed when he resigned his position but I understand why….he could not be part of this war in Syria….he preferred another approach than the “big stick” philosophy.

Former SecDef Chuck Hagel believes that NATO should not have a military role in Syria.

“I would be very careful to advise a president of the United States to get NATO actively involved in Syria.” Hagel said Tuesday at the Atlantic Council. “I think we can help, we should help, and many of us are, in our own way. But that problem in the Middle East is so deep, so wide, so combustible, so rift with so many uncontrollable elements, that it ain’t gonna be solved by NATO.”

Hagel makes a lot of sense and should have been allowed to make his mark on US foreign policy…..but sadly it was more important to make the M-IC happy so Hagel had to go to make room for a “yes man”…….Carter.

America lost the best man for the job of SecDef……but that is the way we do things…..replace competence with a “yes man”…..