My final post of the day…..keeping you informed because NO one else will.

Once again I will step up and give you the news that the media would rather you not know…..

First, this is not from the shooting war in the Middle East but from a country that has tasted the terrorism we all so dread…..Belgium

The entire population of Belgium is to be issued with a ration of iodine tablets, months after warnings about the threat of Isil building a dirty bomb.

It emerged following last month’s terrorist attacks that an Isil cell may have been plotting to kidnap a nuclear expert in order to build a “dirty bomb”. Eleven nuclear workers had their passes revoked.

Do they know something we should?  Maybe…….

Though the extremely cautious nature of their statements means they didn’t offer much detail, the Organization for the Prohibition of Chemical Weapons (OPCW) is expressing “extreme concern” about the possibility that ISIS is not only using chemical weapons, but is making them.

The “possibility” is just their reluctance to confirm things they haven’t been formally authorized to confirm, as ISIS has bragged about their capacity to manufacture chemical weapons in multiple videos, and they have repeatedly launched such strikes, sickening large numbers of civilians and combatants.

ISIS has captured a large number of empty chemical weapons shells over the course of the war in Iraq and Syria, remnants of those nations’ since dismantled programs, and has developed the capability to produce some more primitive chemicals to deploy in such weapons.

It is permissible to worry?

Speaking today at the Senate Armed Services Committee, Joint Chiefs of Staff chairman Gen. Joe Dunford confirmed that US troops in Iraq are “fighting and dying” in combat operations, confirming that the October 22 death of a Army sergeant was in combat.

That admission is a big one, as US officials have danced around the question of “combat troops” by presenting the troops being deployed to Iraq, and elsewhere in the region, as “trainers” or “advisers” in official comments.

Sen. Dan Sullivan (R – AK) pushed particularly hard on the matter, saying he believes the attempt to present Iraq as “non-combat” diminishes the sacrifices of the soldiers slain in the country, and that it iss important to “level with the American people.”

Finally a little truth from the Pentagon…it is a bit refreshing.

One more LIE from the White House……..

After Pres. Obama announced on Monday that he would deploy 250 additional special operations troops to Syria, State Department spokesperson John Kirby tried to deny that Obama had ever promised not to send “boots on the ground” there.

“There was never this ‘no boots on the ground,’” said Kirby. “I don’t know where this keeps coming from.”

The problem for Kirby was that Obama has repeated the promise at least 16 times since 2013:

For instance, on August 30, 2013, Obama said: “We’re not considering any boots-on-the-ground approach.”

On September 10, 2013, he said: “Many of you have asked, won’t this put us on a slippery slope to another war? One man wrote to me that we are ‘still recovering from our involvement in Iraq.’ A veteran put it more bluntly: ‘This nation is sick and tired of war.’ My answer is simple: I will not put American boots on the ground in Syria.”

Appears the Brits are going to follow suit of the Americans……

British defense officials are confirming that there is ongoing consideration of a plan to send “hundreds more” troops to Iraq, with the troops to be listed as “trainers.” This would be a substantial addition to the existing 300 troops in Iraq.

Unlike the US, which has been putting its ground troops increasingly on the front lines, the British troops in the nation so far are far away from any combat sites. In addition to training

Another American soldier has died in Iraq…..

ISIS forces attacked and overran the northern Iraqi town of Tel Asqof, near the major ISIS city of Mosul, with a number of suicide vehicle bombers forcing their way in through Kurdish forces, and fighting heavily. Among the slain in what officials are confirming is “direct combat” was a US Navy SEAL, Charles Keating IV.

This is the third US soldier killed in fighting on the ground in Iraq since the latest war began in 2014, despite repeated assurances from the Obama Administration that there would be “no boots on the ground” in Iraq whatsoever.

News from the battlefront that is not important enough for the MSM to waste their time on reporting…..

May the fourth be with you!  Today is Star Wars Day….go figure.

Remember back to 9/11…..all the deaths and destruction was the result of one organization and only one….Al-Qaeda.

Osama became the world’s most wanted fugitive and resources were spent hand over fist to find him and eliminate him….Hell we even went to war to get the SOB that attacked the US on 9/11.

After 15 years of war and drone strikes killing more people than the attacks on 9/11…we are still NO closer to eliminating this group from the face of the earth….we did however eliminate the head of the snake but the snake still lives.

They have moved into Iraq, Libya, Yemen and Syria……and all those locations we are dropping ordinance on them like a summer rain…..that is all over but in Syria…… 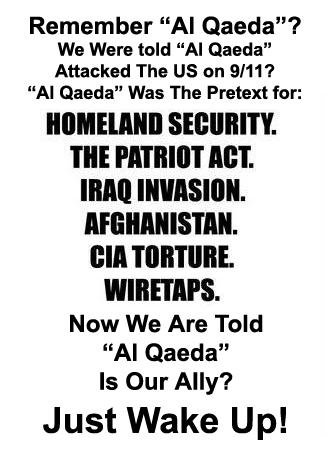 Say what?  Why would the US give AQ Syria a break from the battering?

There is an easy answer….AQ Syria is on our side in our battles with ISIS, the scourge of the Middle East…..

Now we see the extraordinary situation where the US government admits that the militia groups Jaish al-Islam and Ahrar al-Sham are fighting alongside and are “intermingled with” al-Qaeda’s Nusra Front, but resoundingly rejects the Russian request to therefore classify these two groups terrorist.

In fact, not only does fighting alongside and “intermingling with” al-Qaeda not get a group classified “terrorist,” the US government is actually asking Russia and the Syrian government to stop shooting at such groups!

So the State Department is urging the Syrians and Russians to stop bombing Aleppo because Jaish al-Islam and Ahrar al-Sham are operating there, even though it also admits that the groups are “intermingling” with al-Qaeda’s Nusra Front.

Do you find this unusual?

You should not….think back….Noriega, Saddam, etc….those bastards were once friends with the US and the CIA but found themselves on the wrong end of the politics of DC…..

Now the question is…..Is AQ still a terrorists organization?  Or do they get a deferment but only in Syria?  What will happen when ISIS is NO longer a threat?  Will AQ once again be on the “bad boys” list?

I thought at the very beginning of the civil war in Syria that the situation was confusing…..we had 34+ factions fighting the Syrians, the US, ISIS, each other and God knows what else.  And t…

Source: Syria: Just How Confusing Can One Conflict Be?

Now this turn of events……do you get the feeling that these jokers have NO idea what they are doing in Syria?

Does anyone know what SNAFU means?

Wait!  Should that be “election” not “erection”?  I used the word “erection” in the title because all those rabid Trump supporters are dealing with wood on several levels…..Cruz has tucked his tail and will slither back to the Senate and the media is starting to use the term “presumptive” when talking about Donald…..

Ted Cruz is out. The Texas senator is ending his campaign after being routed in Indiana by Donald Trump in Tuesday’s primary, reports the AP. Cruz had staged a last stand in the state in the hope of preventing Trump from securing the nomination, but he told supporters that he has no “viable path to victory” after the loss. “The voters chose another path,” he said. “We gave it everything we’ve got.” Trump, who was leading by about 15 points, had been declared the winner as soon as polls closed at 7pm EDT. “We’re going after Hillary Clinton,” he told his own supporters after Cruz’s announcement. “And we’re going to win.” In his speech, Trump also praised Cruz as “one hell of a competitor” and said he had an “amazing future.”

Shortly after Cruz’s bombshell, Republican National Committee chief Reince Priebus tweeted that Trump is the “presumptive nominee,” adding that “we all need to unite and focus on defeating” Clinton. In his own speech, Cruz made no mention of the front-runner. Earlier in the day, however, he unleashed a diatribe, calling Trump a “serial philanderer” and a “pathological liar,” notes NBC News. That came after Trump dredged up a bizarre National Enquirer report linking Cruz’s dad to Lee Harvey Oswald. John Kasich was a distant third in Indiana, though he gave no indication he planned to follow Cruz’s lead and drop out.

If you listen closely you will hear the orgasmic howls of the Trunp-ites….now they can turn their venom toward the Clintons…..

Congrats Donald….now use the power well.

There is a subject that is hit or miss….meaning that they become the focus of attention when there is little else to write about…..

Here in the US it is a subject that conjures up images of rape, plunder and welfare fraud….at least to some……and the off chance that there is a major terror cell waiting for entry into the country.

There are tales from the EU and first destination countries of all the “problems” these people are causing…..and of course like anything else it is used to poo-poo on the idea of a resettlement of any refugees because they ALL will be a problem waiting to happen.

But all the negativity has overlooked at least one aspect of the refugees that is a positive note.

Domenico Lucano, mayor of Riace, sees the flow of refugees in Italy as an opportunity.

As the continuous influx of refugees is seen as a cause for concern for many European nations, which are employing strict border controls to stop the unprecedented flow of people, one community in the southern Italian region of Calabria has taken a different perspective of the matter.

The village of Riace had seen its population drop from 2,500 to 400 since the 1990s, when people moved to northern Italy for better economic opportunities.

Domenico Lucano, Mayor of Riace, saw the flow of refugees in Italy as an opportunity. “We have been welcoming refugees with open arms for the past 15 years. [They have] saved our village,” Lucano explained.

The resourceful mayor first acted on this opportunity in 1998, when a boat with 218 Kurdish refugees on their way to Greece got stranded on a beach in Riace. This is when Lucano first proposed that the refugees should stay in the village and take over the homes and apartments that had been left vacant by the migrating former residents of the town.

I am not saying that all opinions are wrong or inaccurate just that there are some positive aspects from allowing refugees to relocate.

This press is of an op-ed that I wrote for my friends at Ace News Room……it is no secret that I am a supporter of the Palestinian people and their desire for their homeland and the right to return…..

Western media seldom reports accurately about the situation and the incidents occurring in the Holy Land……I try to remedy that oversight on their part.