Americans are worried about the rise in gun violence and murder in our largest cities……and now the White House endorses a plan by a insurrectionist senator to add 100,000 more cops on the street.

The White House distanced itself from the “defund the police” movement by endorsing Republican Missouri Sen. Josh Hawley’s proposal to hire 100,000 new cops, according to a press release from the Office of Josh Hawley.

Hawley introduced legislation in June to combat spiking crime rates. The legislative agenda included hiring 100,000 new police officers, increasing penalties for assaulting officers, protecting the privacy of law enforcement officials, expanding concealed carry rights for judges and prosecutors and creating a criminal offense for targeting officers based on their occupation, according to the Office of Josh Hawley. 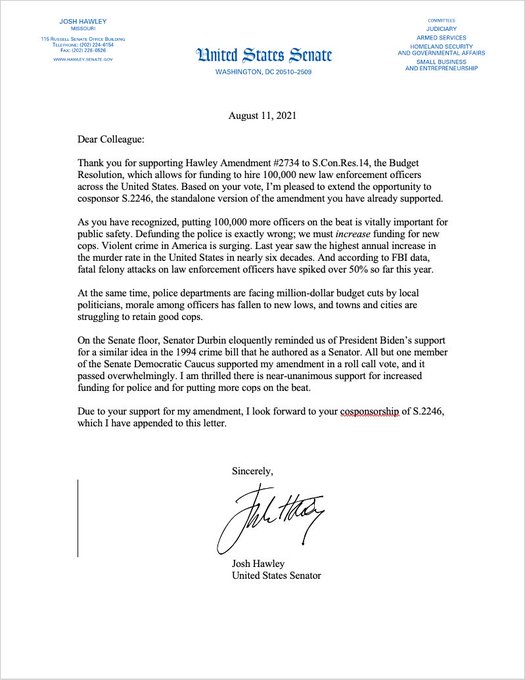 “American families aren’t safe, but they deserve to be. And they can be if we will act. This is not the time to defund the police or vilify them, but to support the brave men and women in blue – and put more of them on the streets. Immediately,” said Hawley about his proposal.

The answer to gun violence is to put more guns on the street……add 100,000 more guns to the fray.

Biden is on board with this as a election strategy….he is trying to run away from any police reform to garner votes…screw the idea of trying to find actual solutions to the problems of gun violence.

As usual it is about the next election and never a thought of the actual problem.

This is what you get when you worship centrism….more problem added to the problem.

Just what this country needs….100,000 new cops with guns….what could possibly go wrong?

14 thoughts on “A Solution For Gun Violence?”