The weekend is once again here and we start a New Year…..let us all hope the 2021 will be a better year or at least a less stressful year.

But there are few things that irk me and irk me bad…..

First, dog walkers need to take responsibility for their canines and clean up the dog poop from people’s yards and the sidewalks.  We use to have very responsible people and now that there are some many new home owners they allow their dogs to crap and leave.  These people are lower than slugs in my book and that is really low.

Then there are those sickos that refuse to wear a mask or wear it properly…these people (I use the term loosely) care nothing about infecting others because of their stupidity.

Is there some way that we could get morons to do the right thing?

Governors, mayors, and public health officials are sounding the alarm about rising levels of Covid-19 across every part of the country. The disease is surging, the death toll is soaring, and it’s clear that some states need more restrictive measures to control the spread.

What continues to frustrate so many leaders is that nine months into this pandemic, science and data have painted a clear path for how to beat the virus and reduce transmission. But the disappointing and deadly truth is that in many cases, it’s difficult to get Americans to follow the rules.

Boosted by a president who celebrates breaking rules and deliberately defies science and time-tested norms of civility, millions of Americans have been flagrantly flouting simple requests to wear masks in public, to refrain from congregating in large groups, or to limit their unnecessary travel. With the rule-makers themselves publicly disregarding the recommendations of experts and scientists of their own administration, rule-breaking Americans have quickly followed.

More morons acting during a pandemic….

A Wisconsin health system said Wednesday that 500 doses of coronavirus vaccine that had to be discarded after they were left unrefrigerated now appear to have been deliberately spoiled by an employee, the AP reports. Aurora Medical Center first reported on the spoiled doses on Saturday, and said they had been accidentally left out overnight by an employee at Aurora Medical Center in Grafton. In a statement late Wednesday, Aurora said the employee involved “today acknowledged that they intentionally removed the vaccine from refrigeration.”

Aurora’s statement said they had fired the employee and referred the matter to authorities for further investigation. Their statement said nothing about a possible motive for the action, and health system officials didn’t immediately respond to messages seeking more information. “We continue to believe that vaccination is our way out of the pandemic. We are more than disappointed that this individual’s actions will result in a delay of more than 500 people receiving their vaccine,” the statement said. Aurora declined to provide additional information, but said they would provide more details Thursday.

Was this an act of terrorism from some moron anti-vax believer?

Not to worry the prick has been charged……

Authorities arrested a suburban Milwaukee pharmacist Thursday suspected of deliberately ruining hundreds of doses of coronavirus vaccine by removing them from refrigeration for two nights. The arrest marks another setback in what has been a slower, messier start to vaccinate Americans than public health officials had expected. Police in Grafton, about 20 miles north of Milwaukee, said the Advocate Aurora Health pharmacist was arrested on suspicion of reckless endangerment, adulterating a prescription drug, and criminal damage to property, all felonies. The pharmacist has been fired and police said in a news release that he was in jail. Police did not identify the pharmacist, saying he has not yet been formally charged. His motive remains unclear. More on what allegedly occurred, per the AP:

If so then this person needs to be charged under the terrorism statue…..

More troubling Covid news……seems the wrong infect was given to people…..

They thought they were being inoculated against COVID-19; instead, 42 people in West Virginia were mistakenly administered Regeneron’s experimental monoclonal antibody treatment. The West Virginia National Guard, which is at the helm of the vaccine distribution effort in the state, confirmed that the goof occurred Wednesday in Boone County. The Guard said Thursday that the Regeneron vials were, due to human error, mistakenly put with Moderna vaccine vials at a distribution hub, and the two were then sent together to Boone County.

Though the Regeneron cocktail is supposed to be delivered via an IV rather than injection, the Guard says none of the 42 people on the receiving end of the mix-up have had any issues thus far but will continue to be monitored. The New York Times reports that while the vials do look a bit alike, both the vials and the box they come in are “clearly labeled.” Both require refrigeration prior to use. The Guard noted in a statement that “these individuals will be offered the vaccine as soon as possible with a priority status.”

Appears that Operation Warp Speed is hitting some bumps in the pandemic road……a smooth and orderly roll out of the vaccine is not in the cards for now.

For years society has been bombarded with anti-smoking ads and then they went to anti-vaping….but I read an interesting report about smoking and Covid-19….

Few of those hospitalized with the coronavirus are smokers, and researchers are trying to understand why, according to VICE.

One hypothesis is that nicotine, which has anti-inflammatory properties, may interfere with the way that COVID-19 causes an overreaction of the immune system.

The hypothesis comes from Konstantinos Farsalinos, a cardiologist in Greece who focuses on tobacco-use reduction. Farsalinos noticed that few COVID-19 patients who were hospitalized in China were smokers, though about half of men in the country smoke.

I know it is one premise but I found it interesting….

Speaking of smoking……after we banned smoking did we increase drunk driving?

While smoking bans indoors have become pretty ubiquitous, this research may have new relevance as states begin liberalizing marijuana laws and cracking down on e-cigarettes and vaping. Policymakers have to determine if tamping down or easing up on drug restrictions affects the use of other potentially dangerous substances. If legalizing marijuana has the unintended consequence of increasing cigarette usage or cracking down on e-cigarettes pushes those consumers to smoke cigarettes more, that’s a big problem. Burton’s research looks to see if a policy that worked to stop smoking actually could have led people to drink more and led to measurable increases in drunk driving fatalities.

I do like it when animals get even with trophy hunters….like the lions in Africa that attacked and hate a couple of poachers……then I read another story about a hunter that got zapped by an animal…..

A hunter in Ireland died Tuesday after a pet deer he was feeding attacked him, the Irish Examiner reports. Gerard Withers, described as a “renowned huntsman,” was gored and trampled by the stag at the Duhallow Hunt Kennels in Liscarroll, per the Irish Independent, which notes that male deer become aggressive during the breeding season that runs from September to December. Deer and other animals are often kept at kennels so foxhounds become familiar with them and don’t chase them during hunts, according to the Examiner.

Withers, a married father of three young children, was found after friends became worried about him when he didn’t return from feeding the animal. The 45-year-old was unresponsive. He was given emergency medical care, but was pronounced dead later at a local hospital. “It happened out of the blue,” one friend tells the Independent. “You can’t anticipate something like this happening. We are all devastated. We have lost a good man and a good huntsman.”

Score another point for animals.

Finally, the Boy Scouts have had their problems with law suits for behavior of some of their leaders….now scandal is finding the Girl Scouts….

They are two young girls from two very different worlds, linked by a global industry that exploits an army of children. Olivia Chaffin, a Girl Scout in rural Tennessee, was a top cookie seller in her troop when she first heard rainforests were being destroyed to make way for ever-expanding palm oil plantations. On one of those plantations a continent away, 10-year-old Ima helped harvest the fruit that makes its way into a dizzying array of products sold by leading Western food and cosmetics brands—including Girl Scout cookies. Ima is among the estimated tens of thousands of children working alongside their parents in Indonesia and Malaysia, which supply 85% of the world’s most consumed vegetable oil. An AP investigation found most earn little or no pay and are routinely exposed to toxic chemicals and other dangerous conditions.

Some never go to school or learn to read and write. Others are smuggled across borders and left vulnerable to trafficking or sexual abuse. Many live in limbo with no citizenship and fear being swept up in police raids and thrown into detention. The AP used US Customs records and the most recently published data from producers, traders, and buyers to trace the fruits of their labor from the processing mills where palm kernels were crushed to the supply chains of many popular kids’ cereals, candies, and ice creams sold by Nestle, Unilever, Kellogg’s, PepsiCo, and many other leading food companies. Child labor has long been a dark stain on the $65 billion global palm oil industry. In some cases, an entire family may earn less in a day of laboring than a $5 box of Girl Scout Do-si-dos.

Just a closing thought….I do enjoy wine mostly reds but from time to time I find a white that I will drink….like white Bordeaux or a Chenin Blanc and a couple of Spanish whites….so with the holidays I went looking for a white that would pair well with turkey and ham…. and I hit on a very good white blend (no compensation offered or given)…..

The name is the first thing I noticed…… 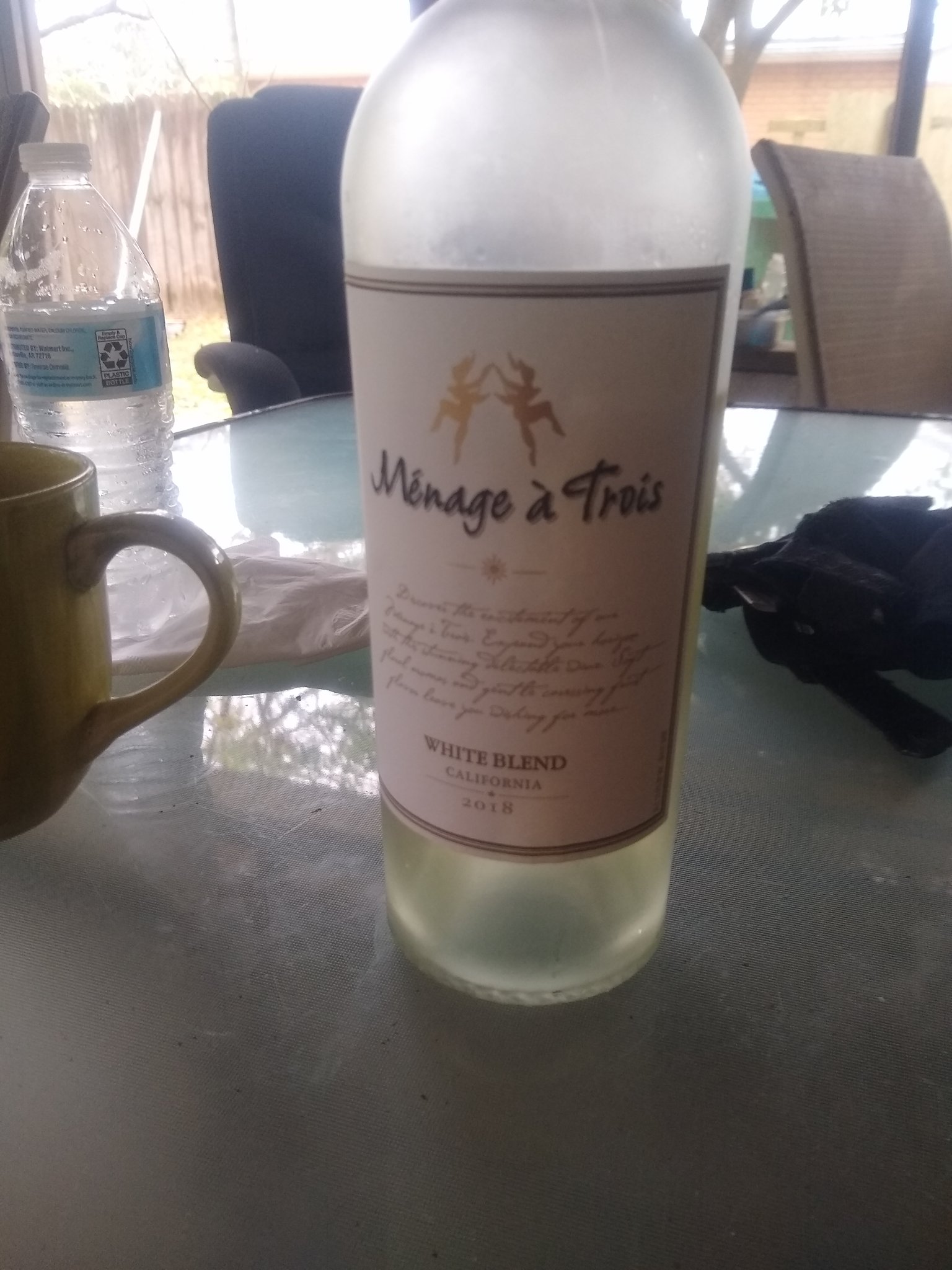 It is a blend of chardonnay, muscato and chenin blanc…..subtle and refreshing…..very clean.

Sorry for the lengthy post on this Saturday but there was a lot happening while we were looking forward to the New Year…..

4 thoughts on “Saturday Thoughts And Bitches”