Our veterans have to burden a lot on their shoulders…..they are looked up to as “heroes” whenever the need arises and ignored the rest of the time….they served this country honorably and the nation treats them horribly.

Our veterans have to deal with a VA that is inadequate for their needs……they try to live with PTSD unsuccessfully for many….and then I read this story…..

The inspections, conducted at 99 VA facilities, found problems resulting in “actual harm” to patients in 52 facilities, according to USA Today. In three facilities, inspectors found issues that put veterans’ health and safety in “immediate jeopardy.”

The facilities found to cause harm are in 25 states plus Washington, D.C., and Puerto Rico.

This is shameful and will go mostly ignored….the MSM is as fickle as the people when it comes to our veterans…..

As a veteran I get pissed when I read these types of stories……because the people will remain silent and continue the pretense that the veterans actually matter. 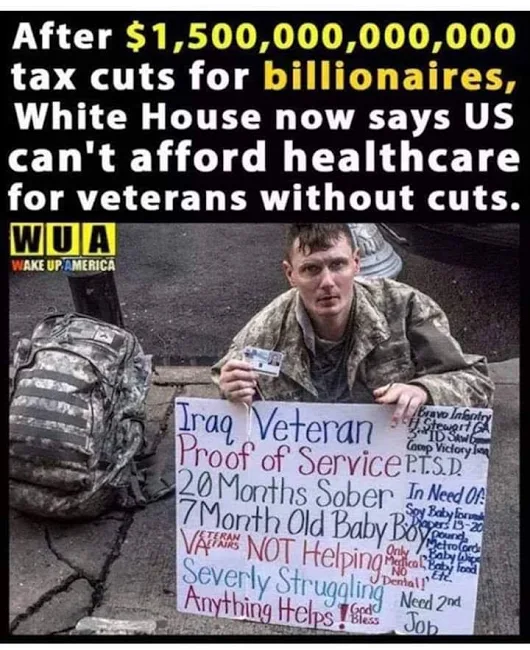 I have been posting an historical series written by Maj. Danny Sjursen….his series is a bit different look at our history in the vain of Zinn’s People’s History……it is an excellent look at American history from the beginning….

This “chapter” takes us to the dreaded “Cold War”……..the days of the Red Scare and the days of yore…..

Nothing is inevitable. Not war, not peace. Those writers and politicians who tell readers or constituents otherwise are selling snake oil. So it is, oftentimes, with proclamations about the Cold War. Americans have been taught, programmed even, to believe that a permanently bellicose nuclear standoff with the Soviet Union was inescapable—such was the diabolical nature of global communism. There were no alternatives, we have been told, to a firm military response to Soviet aggression in the wake of World War II. This myth of inevitability served, and serves, a vital purpose. That purpose is to explain the seemingly unexplainable: how Soviet Russia, America’s valued ally in World War II, so quickly transformed, almost overnight, into a national boogeyman. You’re not supposed to ask tough questions or draw nuanced conclusions; to wit: Weren’t the U.S. and the Soviet Union ideological enemies long before they were allies (of convenience)? And, couldn’t different American policies have assuaged Soviet fears and lessened the atmosphere of tense standoff after 1945? To answer yes to either, of course, is to commit national heresy, but honest history demands that the scholar and student do exactly that.

I believe that Americans should know our entire history not the sanitized bullsh*t we are given in school…..and Maj. Danny does an excellent job in our continuing education.

I believe that you either learn from history or it devours you.

That title sounds like one of the Fabulous Thunderbirds episodes or maybe a chapter in the saga of G.I. Joe….whatever……

IST is one of the few blogs or sites that is taking this whole Space Force thing seriously…..I have written many posts on this issue…..

The wheels have been set in progress for the development of a US Space Force…..

Organizational design theory predicts several worrisome outcomes of a Space Force created either as a separate service or an independent department. The granting of independence to the U.S. Air Force in 1947 and the establishment of U.S. Special Operations Command in 1987 share striking similarities with the Space Force debate in terms of the general security environment and the specific re-organizing proposals. In each case, unique mission sets were differentiated at the highest levels — that is, they were insulated from outside control and elevated within the organization.

Slowly but slowly Trump is expanding our presence in space……Trump is hedging his bets in case Congress does not give into his desire…..

The Trump administration may not ultimately get to create the highly-anticipated Space Force — that will fall on congressional shoulders — but the White House has made strides in expanding the U.S. military’s role beyond the Earth’s atmosphere anyway.

I have always pointed out the cost to taxpayers for this decision……and it continues to grow…..

Acting Defense Secretary Patrick Shanahan on Wednesday said his pitch to skeptical lawmakers on the need for a U.S. Space Force is that the Pentagon needs to move fast to keep up with pacing threats from Russia and China in space.

But could the sixth military branch eventually grow to better execute its purpose?

Speaking to audiences during a Center for Strategic and International Studies event in Washington, D.C., Shanahan said he envisions “15,000 to 20,000” individuals defending and protecting U.S. interests in the domain. In its fiscal 2020 budget proposal, the Pentagon said the branch will have 15,000 people, making it the smallest of any service.

While the Space Force will not need roughly $12.9 billion over five years to resource personnel and infrastructure for the branch like the Air Force originally proposed, Shanahan said the $2 billion over the same timeframe proposed to Congress is a “parametric estimate,” meaning one that uses historical cost information and analysis of previous conditions to arrive at a figure.

I have posted on this earlier…..China and US in a race for space domination……

Fifty years after the first moon landing, an American triumph that gripped the world, China marked the start of 2019 with its own lunar achievement. Chang’e-4, a Chinese probe, landed on the far side of the moon in early January, broadcasting – for the first time in human history – images of the cratered surface that faces away from Earth.

Chang’e-4 has been billed as a friendly explorer, the latest step in humanity’s mission to better understand and exploit the universe around us. But space exploration has always been about power. Beijing’s lunar feat represents the latest development in the space race between China and the United States – a conflict that will be “important to modern warfare,” according to a US Defense Intelligence Agency report released in January that identified China as a “threat”. The Chinese foreign ministry responded by calling the report “reckless” and “totally groundless,” insisting that China “opposes militarisation and an arms race in space.”

All this “urgency” for a Space “unit”….could this be another war prep by the US?

Staying ahead of space trends – from satellite manufacture to new launch options – is daunting. Six trends – at least – are at work. To what exact end they vector is unclear, but watching is important. These trends will affect American investment in space, national security, our modern standards of living, and our wider economy.

First, heavy satellites are getting heavier, as more capability is attached to each satellite. Capabilities are commercial to national security, communications to climate prediction, crisis response to territorial protection, real-time analysis to event anticipation.

All this talk about a Space Force……will it be legal according to international treaties?  Of course Trump can do what he always does disregard any treaties he does not like…..stay tuned I will be posting on “Space Law” soon.  (There are laws about space….believe it or not….)