They Are ALL Nazis!

Before some witless dolt throws the Godwin Law at me for this post….I say read it then make your goddamn comment.

The Turkish president lashed out at criticisms against him and his government’s actions on Wednesday, calling Europe the “real Nazis.” He warned European leaders to abandon their double standards or risk losing Turkey.

“Without any shame, ignoring their own blood-stained hands and without considering their own callous hearts, they draw comparisons between us and the Nazis,” Recep Tayyip Erdogan told a business conference in Istanbul. “If there are any Nazis, it is you who are the Nazis.

“The Nazi mentality emerged in the West, not the East. It was our ancestors who reached out and saved the lives of those they chased away,” he said. “It can only be a result of delirium to compare Turkey to the Nazis, when neo Nazism is at a peak in Europe.”

This douche is a piece of work……so according to him, Erdogan, this is what Europe looks like…… 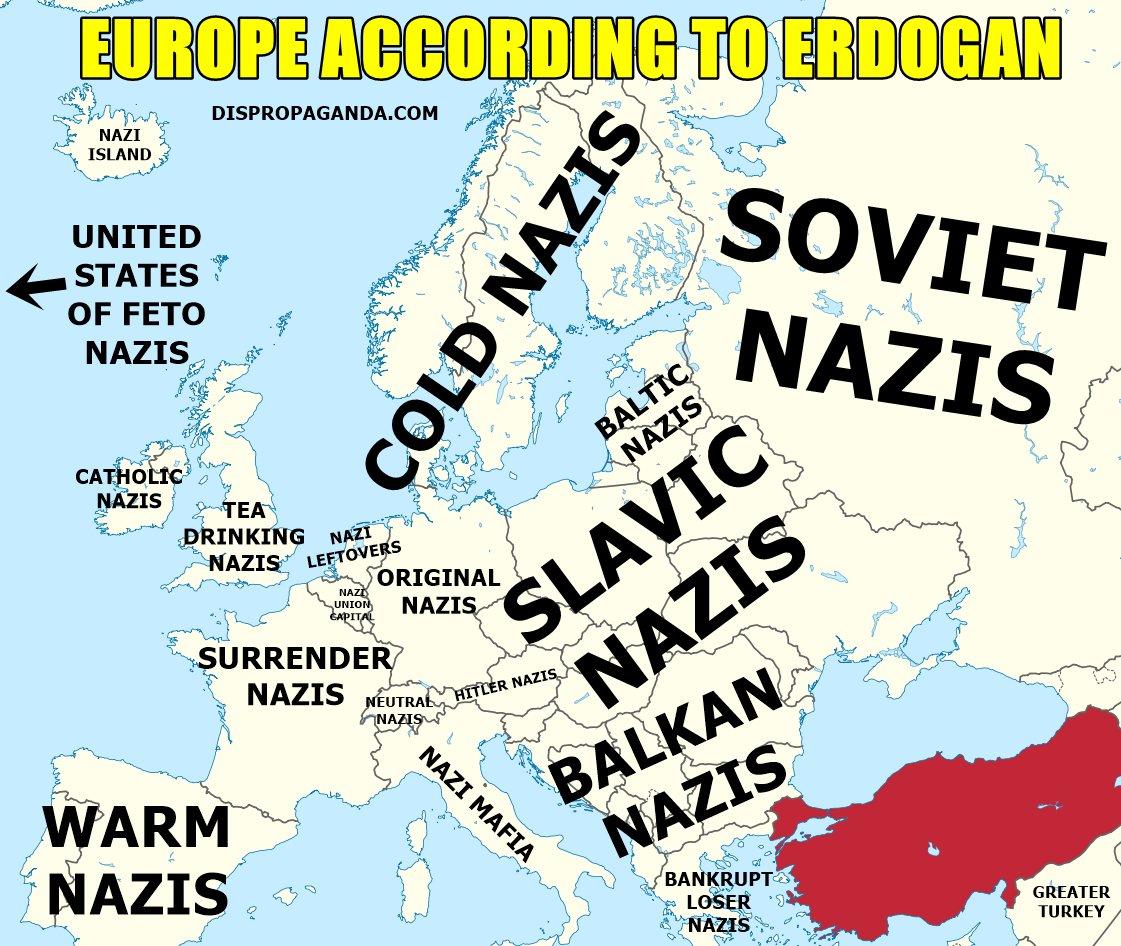 What a closing for the day, huh?
Back in the marrow with more incredible stuff….chuq

WE have crazies on the Right…well that is an understatement….we have a wealth of batcrap crazies…..and the Trump administration has put most of them to work.

Remember those guys back in the day that wore a tin foil hat to stop the brain waves being tapped by aliens?  Or from receiving secret messages from space?  Nice to see that these people have found gainful employment…..within the Trump admin.

Well maybe those guys are not as crazy as we pretended they were…..and it goes all the way to the White House…..

She may have been speaking from her home in New Jersey, but Kellyanne Conway put the focus back on NYC’s Trump Tower on Sunday. In an interview with the Bergen County Record, Conway was asked about President Trump’s allegations that Trump Tower was wiretapped by the Obama administration, and her response was read by the Record as a suggestion that something “broader” may have been going on. The key lines: “What I can say is there are many ways to surveil each other now … There was an article this week that talked about how you can surveil someone through their phones, certainly through their television sets—any number of different ways, microwaves that turn into cameras, etc. We know that that is just a fact of modern life.” Cue headlines like these:

On Monday, Conway hit back at such coverage, tweeting, “response to Bergen Record was about surveillance articles in news & techniques generally, not about campaign. Headline just wrong.” On Good Morning America, she said she “was making a comment about the articles from this past week [like this one] … I wasn’t making a suggestion about Trump Tower. These are two separate things.” The Post still faults her for linking them, with Aaron Blake writing, “Her decision to invoke these kinds of surveillance techniques when asked about alleged monitoring of Trump Tower by the Obama administration is only going to [breathe] life into the story going forward.” As for any alleged wiretapping of Trump Tower, “The answer is I don’t have any evidence and I’m very happy that the House intelligence committee are investigating,” Conway said on GMA.

For me the best line was……”The Bergen Record journalist asked her was “do you know that Trump Tower was wiretapped?” — and said she’s “not in the job of having evidence.”

No better closing that that statement.

But if I had to find a better closing statement to add to the humor is one Sean Spicer…..he just had to add his version of the lunacy…..

According to Spicer’s new argument, Trump didn’t necessarily mean wire tapping when he said “wire tapping” — and reporters should know this because he put the phrase in quotation marks. By “wire tapping,” Trump could have been referring to any one among “a whole host of surveillance types.” Obviously.

Please stop talking!  You answer are dropping the IQ of anyone listening.

Have you ever heard the name Mary Edwards Walker before?

Of course you have not and why should you……after all she is only a medal of honor winner….not all that important in the grand scheme (sarcasm).  Not only the first woman to win this award but the ONLY woman to do so…..

Mary Edwards Walker, one of the nation’s 1.8 million women veterans, was the only woman to earn the Medal of Honor, for her service during the Civil War.

She was honored in several ways…. a World War II, Liberty ship, the SS Mary Walker, was named for her and in 1982, the U.S. Postal Service issued a 20 cent stamp in her honor, in April 2011 the residents of her hometown of Oswego, New York will honor her with a statue.

She was there in the early days of women fighting for their rights…..

But you can read more about this extraordinary woman…..

Another woman forgotten by history…..but there will always be people like me that will not let their memory slide from the consciousness of the nation.

We have had Watergate…Bridge-gate……and a wealth of other gates.  Anything the media thinks they can milk for some benefit they will label it a “-gate”…..that is whatever they can sensationalize.

One of the most recent was the Russia-gate fiasco…..you know what I mean…..but in case you are a dolt or completely ignorant…..

There may be a turn-about-is-fair-play element to Democrats parsing the words of Attorney General Jeff Sessions and other Trump administration officials to hang them on possible “perjury” charges. After all, the Republicans made “lock her up” a popular chant citing Hillary Clinton’s arguably illegal use of a private email server as Secretary of State and her allegedly false claim under oath that her lawyers had hand-checked each of her 30,000 or so emails that were deleted as personal.

But there is a grave danger in playing partisan “gotcha” over U.S. relations with the world’s other major nuclear superpower. If, for instance, President Trump finds himself having to demonstrate how tough he can be on Russia — to save his political skin — he could easily make a miscalculation that could push the two countries into a war that could truly be the war to end all wars – along with ending human civilization. But Democrats, liberals and the mainstream news media seem to hate Trump so much they will take that risk.

Source: The Politics Behind ‘Russia-gate’ – Consortiumnews

And of course all this back and forth the Trump people are spreading around about that ominous sounding “Deep State” was a logical next step…a “SPYGATE”.

Everyone is suddenly talking about the Deep State – the configuration of spy agencies, career bureaucrats, and overseas spooks whose murky omnipresence has been brought to light by President Trump’s contention that he was “wiretapped” by his predecessor.

With his usual imprecision, Trump managed to confuse the issue by ascribing the surveillance to Barack Obama, and so naturally spokesmen for the former President had no trouble batting this charge away. But as a former Obama speechwriter put it:  “I’d be careful about reporting that Obama said there was no wiretapping. Statement just said that neither he nor the [White House] ordered it.”

This is all so silly.  It is a diversion from the horrible state of political affairs.

Give them, the media, a new “shiny object” to chase.

A professor colleague approached me the other day he had read a paper that I had written years ago about a linch pin that I thought could start a major conflict (link below is a short post I did for IST on this theory)…..

Source: Looking For The Linchpin – In Saner Thought

My friend is an expert on the ex-Soviet Union, he teaches a class on late Russian history….anyway wanted to debate my premise for he thinks that the focal point will indeed be in Eastern Europe but he thinks it will center around Belarus….after about 2 hours of debate we both came away with our theories in n tact…it was a draw.

Belarus said on Thursday it suspected Russia was trying to restore a formal border zone between the two countries, a move it said flouted agreements on freedom of movement and trade and raised questions about Moscow’s real intent.

Belarus spoke out after the publication of three decrees signed by Alexander Bortnikov, the head of Russia’s Federal Security Service (FSB), that ordered border zones to be set up in three Russian regions adjacent to Belarus.

During my research I found a good paper written for RealClear……

Tensions between Moscow and Minsk have increased dramatically in the last two years as the countries’ tenuous relationship has deteriorated to the point of a regional crisis that mirrors the events in Ukraine. After Belarusian President Alexander Lukashenko began exploring closer relations with the West because of high Russian oil prices, Russian media has ratcheted up an information war designed to spoke fear that Belarus is trying to follow Ukraine in aligning with the West.

Source: Belarus: Rising Fear That Country Will Be the Next Ukraine | RealClearInvestigations

After my research I can see where my friend is coming from….but I still hold to my original premise.