As an ex-rebel myself I am always impressed by people that stand up for what they believe….in 2016 that person is Dr. Jill Stein……

The first inkling that she was a person that would not shrink from confrontation…..

If the man won’t let Jill Stein participate in Monday’s presidential debate, then Jill Stein will just hold her own debate. Politico reports the Green Party candidate will hold a “Let Jill Debate” protest outside the first showdown between Donald Trump and Hillary Clinton at Hofstra University in New York then follow it with a “People’s Debate” on social media. Earlier in the week, the Stein campaign had mulled having 100 supporters risk arrest in an attempt to “escort” their candidate onto the debate stage, according to the Guardian. Neither Stein nor Libertarian Party candidate Gary Johnson were polling high enough—the cutoff is 15% nationally—to qualify for the debate. Johnson says he’ll be watching the debate and live-tweeting it.

Then on the night of the first presidential debate she made good on her threat…..

Green Party candidate Jill Stein was removed from the Hofstra University campus for the second election in a row on Monday. Stein—who was arrested before a presidential debate in 2012—was met by police and campus security after she boarded a media bus to the university ahead of the Hillary Clinton-Donald Trump debate and USA Today reporter Eliza Collins tweeted about it. Stein had planned to hold a “Let Jill Debate” protest outside the event, which she and Libertarian candidate Gary Johnson were excluded from.

Officials say Stein was removed because she didn’t have the proper credentials. “She was on the college campus, we asked to verify for proper credentials, she did not have them, and she was nicely escorted off the campus,” a police spokeswoman tells CNN. Stein went on to live-tweet the debate, offering her own answers, as well as lines like: “I’d be terrified with Trump’s finger on the button but I’d also be terrified with Clinton’s finger on the button.” Johnson also live-tweeted the Hofstra debate. “Neither of these candidates is willing to stand up for free trade. Why am I not at these debates?” he wondered.

Personally I feel that parties that give candidates at every election should be included….especially those with national attention regardless of the poll numbers.

There should be an independent group that controls the debates…..the media is NOT a good source of unbiased BS…….there should be a switch that cuts the candidate off when they digress into campaign posturing….issues only needs to be the rule. 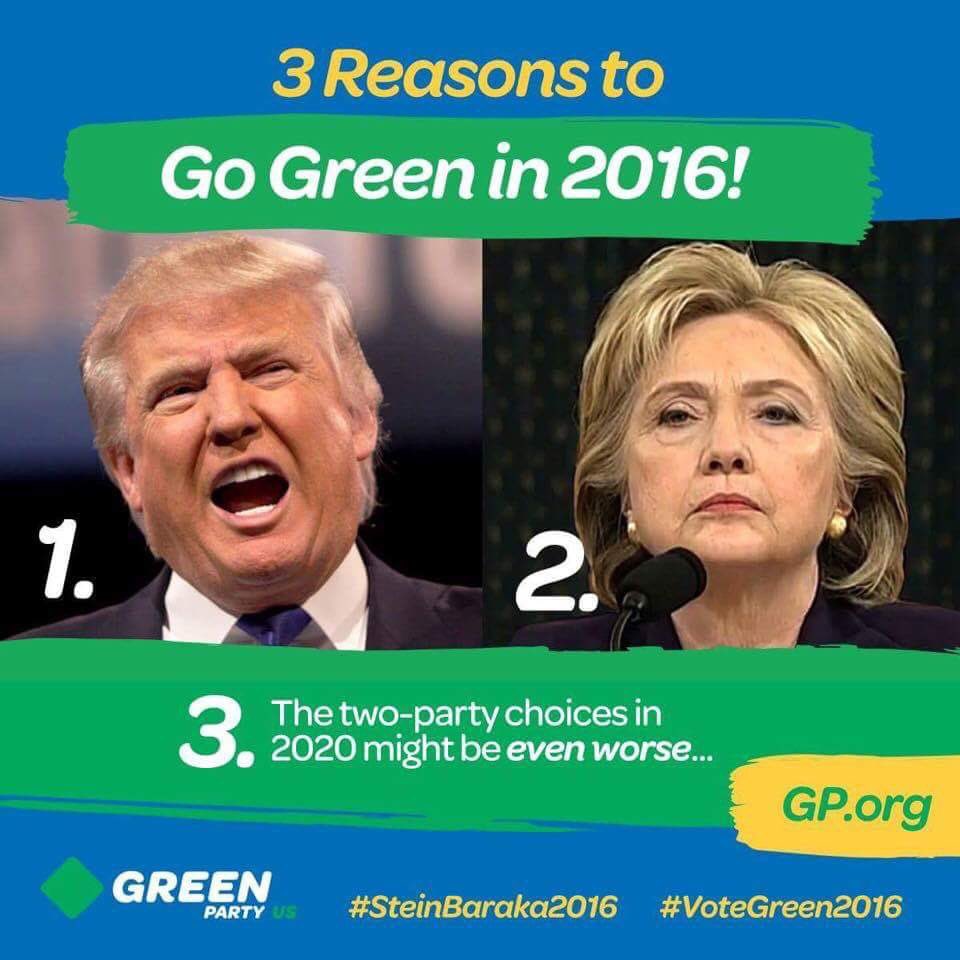 The first presidential debate is now in the history books…..why no one knows…..other than it is an election and we expect the mental midgets to go after each other in a debate or two.

But enough of the trivial bullshit from either of these two dingle berries…..but thanks to the media and people that are afraid of their own shadow…..but the first debate has a segment called “Securing America”……and once again it was about instilling fear not offering solutions…..

The media’s tendency to focus on horserace issues—who’s up and who’s down, what the cosmetics are of an event rather than the substance—is routinely derided by media critics, and mocking it has become something of an election year tradition. But one 2016 topic in particular, terrorism, has become the hot horserace topic of the year in a way that goes beyond the silly to the potentially damaging:

Source: Media Ask Which Candidate Can Better Exploit Our Irrational Fear of Terrorism | Rise Up Times

The candidates had their 15 minutes in the light talking shit……and both showed that they are more than willing to exploit the irrational fear that some Americans harbor about terrorist or Muslims or Hispanics a or any other brown skin individual…..

Most of the people that are fighting terrorism in its many forms are calling for calmer heads…..say that were to happen…..would it collect any votes?

An explosion on the streets of Manhattan, pipe bombs in New Jersey, and a shootout with a terrorist suspect: a jittery election, filled with hyperbole, just grew more breathless.

Of course most of that hype has emerged from the mouth of Donald Trump, and he embraced the emergence of a new terror campaign well before officials confirmed Saturday’s explosion as a bomb.

Whether this helps or hurts Trump’s candidacy depends a lot on whether you are already primed for the politics of fear. If Trump and Clinton sound like they’re talking to two different audiences, that’s because the polls suggest they really are.

Source: On terrorism, cooler heads have better policy. But do they win more votes? | Richard Wolffe | Opinion | The Guardian

The easy answer is NO!

The truth is the M-IC will exploit our fear to make themselves richer and more powerful in DC……by giving in to that fear we will make them the only game in town.

We have a handful of debates remaining….does anyone think that a truthful answer will be given?

AS a public service I will give a breakdown on last night’s debates……NOPE I did not lie…..I did  not watch I will use the media’s breakdown and you decide for yourself….

The first of three presidential debates is in the books, and while pundits will be dissecting it for a while, here is some instant analysis in the wake of round one:

Number one in the bag (in more ways than one)…….and the big loser will be the American voter……no matter who wins governance will be at a stand still…..more so than the last 8 years…..

I have done lots of research on terrorism…..I have attempted to help people understand the tactic as well as see what can be done….a monumental chore.

Americans have their opinions on terrorism….most of which are nothing more than emotional responses for the act.

I had previously wrote that the overall incidents of terrorism across the world are on the rise….the exception being the US….to be fair I had read another report from a think tank, Intel Center, has issued another point of view…..

According to their research terror attacks in the US are on the rise……keep in mind that this is a think tank and are paid for their research….

The number of jihadi terrorist attacks in the US is now at the highest it has ever been and is continuing to rise based on attacks tracked in the IntelCenter Database (ICD). The current rate of attack in 2016 is at one attack every 38 days. In 2016 there have been seven attacks as of 20 Sep., which nearly doubles the previous record of four attacks in 2015. Sixty-eight percent of attacks in the US since 2002 have occurred in the past four years.

Small arms and bladed weapons were the most common tactics, which was driven by a significant increase in inspired attacks. The rise in inspired attacks also resulted in a shift with 58% of attacks occurring in areas not previously thought to be at significant risk from terrorism. Military/Police and recreational sectors were the most frequently targeted with a more detailed breakout putting police personnel, military facilities and civilians the most at risk. New York had the most attacks during the period, however, the attacks were spread out over a total of 13 states.

Source: IntelCenter: Jihadi Terrorist Attacks in US at HIghest Level Ever, Continues to Rise

I must point out that the attacks in the US are mostly “lone wolf” attacks….meaning that they are not organized in the sense of say the 9/11 attack was organized and carried out.

IST tries to offer as many views on the research as possible…..even if it originates at a think tank that probably gets its funding from the M-IC….while I may find their findings a bit dubious they deserve to be heard…..(plus it will give my detractor some ammo to use when they visit not that they will notice)