How old are you?

The reason I ask is if you are at least 35 years old you will remember the terrible famine that hit Ethiopia in the 1980’s…..but in case you were in diapers….

A widespread famine affected the inhabitants of today’s Eritrea and Ethiopia from 1983 to 1985.   The worst famine to hit the country in a century,  in northern Ethiopia it led to more than 400,000 deaths…….  but more than half this mortality can be attributed to human rights abuses that caused the famine to come earlier, strike harder, and extend further than would otherwise have been the case.   Other areas of Ethiopia experienced famine for similar reasons, resulting in tens of thousands of additional deaths.   The tragedy as a whole took place within the context of more than two decades of insurgency and civil war.

If you can remember back then you will remember all the calls for help for the starving inhabitants of the region……or maybe you will recall the images from those days…..

That famine caused the deaths of about 4 million people because of war, drought and crop failures….

But thankfully those days are behind these people……at least you would think so, right?

It looks like Ethiopia is in for yet another round of problems…..thanx to war and drought…….

Conflicts, floods and failed rains caused by El Nino have sparked a sharp rise in the number of people going hungry in parts of east Africa, especially in drought-hit Ethiopia where about 8.2 million people are in need of emergency food aid, the UN has warned.

The UN Office for the Coordination of Humanitarian Affairs (OCHA) said on Thursday that due to El Nino, a global weather pattern that is expected to last until early 2016, “food insecurity is forecast to worsen over the coming months, especially in Ethiopia”.

In many parts of Ethiopia, hundreds of thousands of farmers have fallen victim to the hot winds originating in the Pacific, causing the worst drought to hit the country and the region in decades.

Once again the people of Ethiopia will face starvation and hardships…….not to mention that the rains in the highlands is one of the sources of the Nile…..ask what will that do to the crops downstream if there is little water to feed the Nile……..the famine could spread.

Okay for months now I have been to figure out the allure of one Donald Trump…..I understand the anger that the voter is feeling but that really does not explain the support….

He is so thin on issues and/or solutions…..read the morning paper and by his next speech that will be what he emphasizes….once that becomes the news he moves on to yet another issue he wants to control……has little to do with real issues and more the need to drive the news cycle…..

Like I said I can understand the anger that is growing…..but to settle for platitudes in place of solutions is just plain ignorant…..

Yesterday I read a piece by former Sec of Labor (I believe) Robert Reich that tried to explain Trump’s popularity….at least with angry old white people……

Racial animus only tells part of the story. Red-state voters really believe Trump is so rich he can’t be bought VIDEO

If you read the piece…..is there any thoughts you would like to add….either pro or con……matters not.

Last week, if you can remember back that far, all the rage on news sites was the plane crash in Egypt……that Russian plane that fell from the sky killing everyone on-board….there had been a massive amount of news that talked about this speculation or that and the one that everyone seems to be fixating on is that it was a bomb and that bomb was set by no other than our nemesis…..ISIS.

Good news reports….that is if they are accurate.

Now why would I say such a thing?

In case you are not aware I spend a lot of time reading Middle East and North African news sources and I get stories that most Americans will probably never be exposed to at any time…..

There seems to be a bit of confusion about this tragedy……

Egypt’s military junta so stubbornly denied that the recent bombing of a Russian Metrojet plane over the Sinai Peninsula was an act of terrorism that they didn’t even initiate their own investigation into the attack until a week after the plane went down, and then only after several nations banned flights to the region. Publicly, much of the leadership still doesn’t acknowledge even the possibility of an ISIS attack.

This narrative appears to be getting broadly embraced by the Egyptian media, as several are now claiming that not only was there no bomb on the plane, but that Western nations invented the idea of a bombing as a plot to undermine the junta and “scare off tourists.”

Various outlets, both state-run and the private media that the junta hasn’t shut down yet, are advancing this as a broad Western “conspiracy” against Egypt, and are labeling Western reports of the plane being bombed as “terrorism” against Egypt.

Interesting turn of events…..I can see where they are coming from…..but are they just denying the facts or is there something to their accusations?

Is that about what you hear and/or believe?

You know here is a thought……could there be another reason for the violence…..like Israelis are committed to eliminating the Palestinian any way they can?

You think that is a silly notion from the only “democracy” in the Middle East?

These are statement made by elected officials in Israel…..you decide……. 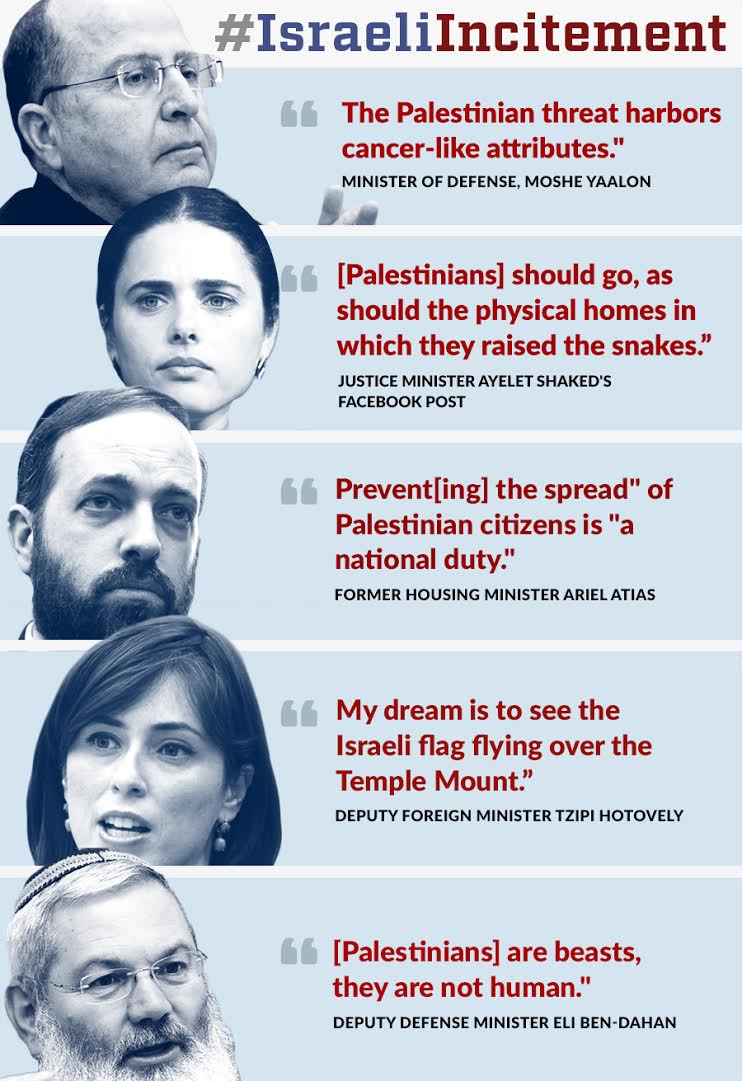 How would you like to be talked about in this manner?

Sadly this post will fall on deaf ears and blind eyes……but if it were me and I will be honest…..I would take it to the streets also……and so would you….even if you are too cowardly to admit it.

I do enjoy my history…..and I hope that my readers appreciate it when I try to give them a little more knowledge that they may already possess….

There are those, which include me, that thinks that the Gulf War of 2003 was a huge mistake and the repercussions are being felt today.

5 wars that the United States could have, and should have, kept out of.

There are a few ‘minor’ wars that I feel we would have been well advised to avoid that will not be counted by most……the wars of Grenada and Panama come to mind handily.  Both of those wars were fought to prove a point not necessarily to solve a problem.

There may be others……Please if you can think of others throw them out there and we will discuss them.