How many people know what they are and why they are illegal?

AS usual the Old Professor can help.

Diamonds are supposed to be symbols of love, commitment, and joyful new beginnings. But for many people in diamond-rich countries, these sparkling stones are more a curse than a blessing. Too often, the world’s diamond mines produce not only diamonds – but also civil wars, violence, worker exploitation, environmental degradation, and unspeakable human suffering.

Not long ago, the public started to become aware that large numbers of diamonds are mined in violent and inhumane settings. Consumers are now demanding, with ever greater urgency, that their diamonds be untouched by bloodshed and human rights abuses. So far, however, the diamond industry’s response has been woefully inadequate. Diamonds with violent histories are still being mined and allowed to enter the diamond supply, where they become indistinguishable from other gems. Violence and injustice remain an everyday aspect of diamond mining.

I bring this up because Russia is proposing loosening the rules around “blood diamonds”….

Russia is proposing to move toward ending the ban on selling so-called blood diamonds from the Central African Republic, a former French colony that’s struck recent military and commercial ties with Moscow, amid resistance from the U.S. and Europe.

The CAR, which is mired in civil conflict, should be granted a “road map” outlining the steps it needs to take to get the suspension of diamond sales lifted, Russian Deputy Finance Minister Alexei Moiseev said in an interview in Moscow.

“We need to ensure that illicitly traded diamonds move to the legal marketplace, bringing income for people and taxes for the state,” Moiseev said. “The situation in CAR isn’t getting any better, and we can’t delay this any more.”

Wassup with this proposal?

These diamonds prop up governments and pay for wars and killings…….why would Russia want to lessen the law and make the activities more numerous?

I have heard some really stupid orders given by military commanders……I never understood why someone would order a bayonet charge when the enemy still had bullets…….and these are the 10 dumbest orders issued……

Obviously, soldiers have amongst the most dangerous jobs in the world. When it’s not the enemy, friendly fire, weather, or disease that gets them, their commanding officers step in to endanger them through stupidity.

Now imagine being one of the soldiers under the commanders who ordered things this stupid:

Pillow was appointed general because he was a friend with then President James Polk from when then practiced law together, so the likelihood he would do something really embarrassing was pretty high from square one. During the war, his most notorious mistake took place when he was stationed at a Mexican village called Camargo. There, he ordered entrenchments built, but had them built so awkwardly that the defenses were backwards, leaving his troops exposed to the enemy.

The incident would have been the most embarrassing incident of his career, but he seemed determined to top it. In 1847, Pillow wrote letters to Washington crediting himself with winning the war, rather than commanding General Winfield Scott; something so blatantly treacherous and false he was arrested for it. He was called back to active service during the American Civil War (luckily for the Union, he fought for the South). There, the most significant thing he did was lose a fortress with 12,000 soldiers to General Grant in 1862. In 1863, he managed to top even that by his actions at the Battle of Stony Creek: one of his subordinate generals found him hiding behind a tree instead of leading his soldiers. (Source: southernhistory.net)

If you know of other equally stupid orders then please share….

I have said numerous times that the Trump White House has no other policy in foreign relations than that of knee jerk BS and CHAOS…..I have made my thoughts known on the stupidity on foreign policy….

To say that I approve of any of our international entanglements would be an out right lie.

One of the best examples of the chaos spread by the Trumpian foreign policy….this time it is a simple letter…..

Top Pentagon leaders said Monday that the US has no plans to withdraw troops from Iraq, despite a draft letter from a senior military officer that appeared to suggest a withdrawal was being planned. Gen. Mark Milley, chairman of the Joint Chiefs of Staff, told reporters the US is “moving forces around” Iraq and neighboring Kuwait. He said a draft letter circulated internally by a Marine commander was “poorly written” and should never have gotten out, the AP reports. The draft letter appeared to suggest the US was preparing to pull troops out of Iraq in response to a vote by its Parliament over the weekend. The draft said troops would be “repositioning over the course of the coming days and weeks to prepare for onward movement” and warned of an increase in helicopter travel around the Green Zone. It added, “We respect your sovereignty decision to order our departure.”

Milley and Defense Secretary Mark Esper, however, said the US has been repositioning troops, largely due to increased security threats from Iran. The letter was meant to coordinate with the Iraqi military on an increase in US helicopter and troop movements. “There’s been no decision whatsever to leave Iraq,” Esper said. Some language in the letter “implies withdrawal,” Milley acknowledged. “The long and the short of it is, it’s an honest mistake.” Esper said the US remains committed to defeating the Islamic State group in Iraq and the region. Pro-Iran factions in the Iraqi Parliament have pushed to oust American troops following the killing of a top Iranian general in Baghdad in a US drone strike last week. A three-ship US naval group that includes 2,200 Marines and a helicopter group is on its way to the Persian Gulf region, per Bloomberg.

In case you want to see the original….then look no further. 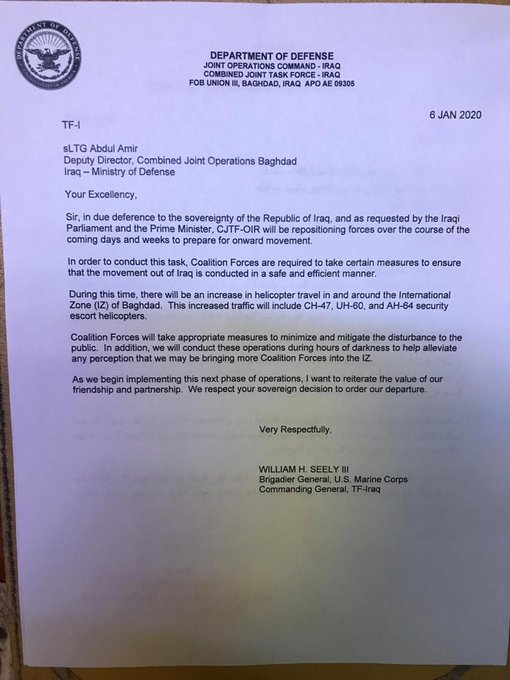 This is just one small example of the inept leaders this country is depending on to keep us safe…..

the Pentagon announced that it was sending an additional 3,500 soldiers to the region, stationed between Kuwait and Iraq, while troops in Italy were put on standby, according to defense officials. The troop escalation came just days after President Trump ordered an additional 750 U.S. soldiers to the Middle East and 3,000 more to be on alert for future deployment, after pro-Iranian forces stormed the U.S. Embassy as part of a worsening cycle of violence.

The United States has tens of thousands of military personnel at bases and aboard ships across the Middle East, as well as arrangements with various countries to move soldiers and military equipment through airstrips and ports. Here’s a look at some of these places, which could now be targets.

Those drums are muted…for now.

There is no doubt that the US has the strongest and best equiped military on the planet……this post is more about strategy than ability…..the two can be separated.

With the assassination of the Iranian general there seems to be an uptick in the concern that the US may be approaching a coming war with Iran with its eyes closed.

That will depend on the idiots around the table.

Too young to remember that far back?

We have had our nacho president Tweeting ignorance almost daily….keep the 1980s in mind when plotting  the insanity of a war…..

The president deployed the stereotype of Iranian cunning to imply that they tricked a naïve president, Barack Obama, into signing a flawed nuclear deal. According to the world’s foremost nuclear security experts, however, the accord was ensuring Iran’s compliance, thereby preventing a nuclear weapons program—that is, until Trump subverted the agreement in 2018.

More importantly, Trump’s words underscore the idea that Iranians are cowardly and militarily ineffectual, but make up for such unflattering character flaws by swindling their foes during negotiations to achieve victory.

Iran’s last war, however, should dispel any notion of cowardice and military weakness—a history President Trump and anti-Iran hawks like National Security Adviser John Bolton must face with clear eyes if the United States is to avoid another needless, catastrophic war in the Middle East.

While the Army exhausted itself fighting two frustrating and inconclusive wars in Afghanistan and Iraq over the last 19 years, both Russia and China embarked on grand strategies of regional hegemony designed to undermine the rules-based international order that emerged after World War II under American leadership. Both of these rising powers have developed myriad ways to sew discord and dissent in America’s network of alliances and to expand their spheres of influence.

Let me say right here…I am NOT saying we have a crappy military…..what I am saying is that the leadership depends too much on past accolades never preparing for the next war with fresh thinking.

Iran will be NO different.

Chest thumping is not fighting a war…..a macho display is just a cowards way to try and lather up the public.