I have critical of what the Special Forces have become…..especially the SEALs….everyone’s hero…..

Then there crimes were taken to a court-martial…..https://lobotero.com/2019/05/20/death-in-mali-is-justice-served/

I was pleased that there was payment for stupidity and crimes…..but that joy is now in the past…….for there has been yet another turn in this story…..

DeDolph—who will be back in court Thursday for a preliminary hearing—was formally charged in November 2018 with felony murder, conspiracy, obstruction of justice, burglary, hazing, and involuntary manslaughter in the strangulation death of Army Staff Sgt. Logan Melgar, a Special Forces soldier assigned to the 3rd Special Forces Group.

Melgar was nearing the end of his deployment when he was killed in the West African nation of Mali in June 2017. He was part of an intelligence operation in Mali supporting counterterrorism efforts against al Qaeda’s local affiliate, known as al Qaeda in the Islamic Maghreb.

Now we know why the new commander of the SEALs is trying to clean up this mess of crime and corruption….aand of curse the president will want to look important but should keep his orange nose out of the process.

More news about the UCMJ and military retirees……

In the latest turn of a dramatic and winding court saga, a naval appeals court has released a split decision finding that a Navy retiree was properly court-martialed and convicted for a crime committed after he had left active duty.

The en banc decision was published Jan. 24 by the Navy-Marine Corps Court of Criminal Appeals, with four judges agreeing with the final decision and three others dissenting. The matter concerns retired Chief Petty Officer Stephen Begani, who pleaded guilty to attempted sexual assault and attempted sexual abuse of a child in December 2017, after corresponding and making plans with a Naval Criminal Investigative Service undercover agent pretending to be a 15-year-old girl.

A crime should be punished….no matter one’s station in life.

Day 8 and it is still not finished…..there is so much news and this is all the blogs are awash with…..that and how “liberals” are socialists….is there an election soon?

Looks like the GOP is trying to wrap their portion up soon…..

President Trump’s defense rested its case in his impeachment trial Tuesday, with White House lawyers urging senators to vote to acquit—and at least three Democrats may end up joining Republicans in doing so. Politico reports that Sens. Joe Manchin of West Virginia, Kyrsten Sinema of Arizona, and Doug Jones of Alabama are still undecided and say they won’t know whether to vote to convict until the trial is over. “I am leaning in certain ways but I want to hear, I truly, honestly, want to hear the entire trial,” says Jones, who is up for reelection in a red state this year. At least one of the senators may end up splitting their vote and choosing to find Trump guilty of abuse of power but not of obstructing Congress, or vice versa.

Republican Sens. Mitt Romney, Susan Collins, and Lisa Murkowski might buck their party on calling witnesses, but it’s not clear whether they would vote to convict the president. A vote on calling witnesses is expected Friday, after 16 hours of questions from senators, which start Wednesday. The Hill reports that Republican senators, who hold a 53-47 majority in the chamber, emerged from a caucus meeting Tuesday expressing confidence that they would have the 50 votes needed to avoid calling John Bolton or any other new witnesses, meaning the trial could end Friday. Senators say Senate Majority Leader Mitch McConnell told the meeting that a vote to bring in new witnesses could extend the trial for weeks.

These 3 Dems are the ones I would expect to side with the GOP…….no matter the evidence.

President Trump’s impeachment trial moved into the 16-hour Q&A phase on Wednesday, and a thus-far largely quiet Chief Justice John Roberts is featuring much more heavily. NBC News explains the process: Senators must write each question on a six-line question card and then give that card to Mitch McConnell or Chuck Schumer. Questions are then given to Roberts, who will name the questioner and then read the question aloud. He has asked that each side—that would be House managers and Trump’s lawyers—limit its answer to five minutes, the time set by Chief Justice William Rehnquist in the 1999 trial of President Bill Clinton, per CNN. Mitch McConnell on Wednesday said that today’s question period would last up to 8 hours; another session will follow Thursday. Coverage:

On and on……the “news” just keeps coming…..and the silliness knows no party.

I leave you with one thought….do not use this trial as an example of our fair and balanced judicial system for this is nothing but a sham dressed up to look like a trial.

An interesting question….we could say yes from drought or storms or habitat destruction….but there is a chance that something much older could be waiting to attack…..

A new study of ice cores in glaciers in the autonomous Chinese region of Tibet reveals that the ice floes are holding viruses previously unencountered by humans, raising the possibility of the microbes being released as the climate crisis continues.

“We’ve opened up a Pandora’s box with climate change,” observed one Twitter user.

The report, “Glacier ice archives fifteen-thousand-year-old viruses,” was published in the journal bioRxiv in early January by the scientists who examined the cores. It is awaiting peer review.

According to NBC News:

The experiment revealed 33 groups of virus genuses (also known as genera) in the ice cores. Of these, 28 were previously unknown to science, the researchers said. “The microbes differed significantly across the two ice cores,” the researchers wrote in the study, “presumably representing the very different climate conditions at the time of deposition.”

But not to worry…..according to that idiot senator, Rand Paul, it is all a fake…..

According to U.S. Senator Rand Paul, fears of climate change are overblown — but we should also venture out and drastically change the environments of other planets so humanity might settle them.

Paul tweeted his bizarre stance ­on Sunday, after he attempted to roast Representative Alexandria Ocasio-Cortez over her aggressive plans to fight climate change, a move which, as HuffPost reports, backfired spectacularly.

And clapbacks aside, his stance that there’s no urgent rush to try and mitigate climate change is troubling given the exhaustive mountain of evidence to the contrary.

There are few words that I can use to describe these morons that does not violate the bounds of decency…..so I will leave it at “MORONS”.

We have been waiting for 3+ years for the promised “Deal of the Century”….and now the wait is over.

But sadly the only good thing is that is finally made public the rest is pure bullshit.

With the ink still drying on President Trump’s Middle East peace plan, Israel says it’s ready for action. Prime Minister Benjamin Netanyahu said Tuesday he will have his cabinet vote Sunday on two key measures: applying Israeli sovereignty to parts of the Jordan Valley and to Jewish settlements in the occupied West Bank, the New York Times reports. Both ideas were suggested in Trump’s plan in exchange for Palestine attaining a path to statehood that would include roughly 70% of the West Bank, the Gaza Strip, and other land. But US officials say they’re OK with Israel annexing the areas regardless of whether the 4-year peace plan progresses.

“Israel does not have to wait at all,” says US Ambassador to Israel David Friedman, per the Times of Israel. “If they wish to apply Israeli law to those areas allocated to Israel, we will recognize it.” It’s unclear whether these moves will require parliamentary approval in Israel, and there could be court challenges since Nethanyahu’s cabinet is an interim government. Meanwhile Jordan, Palestine, and more liberal Israelis are all opposing Netanyahu’s plan. “This is the first result of the ‘fraud of the century,'” Palestinian negotiator Saeb Erekat tells the Washington Post. “It was a green light for Netanyahu and the settlers council to do what they wanted to—legalize the settlements.” Palestinians were also slamming the peace plan, per the AP, with President Mahmoud Abbas saying “a thousand no’s” to it 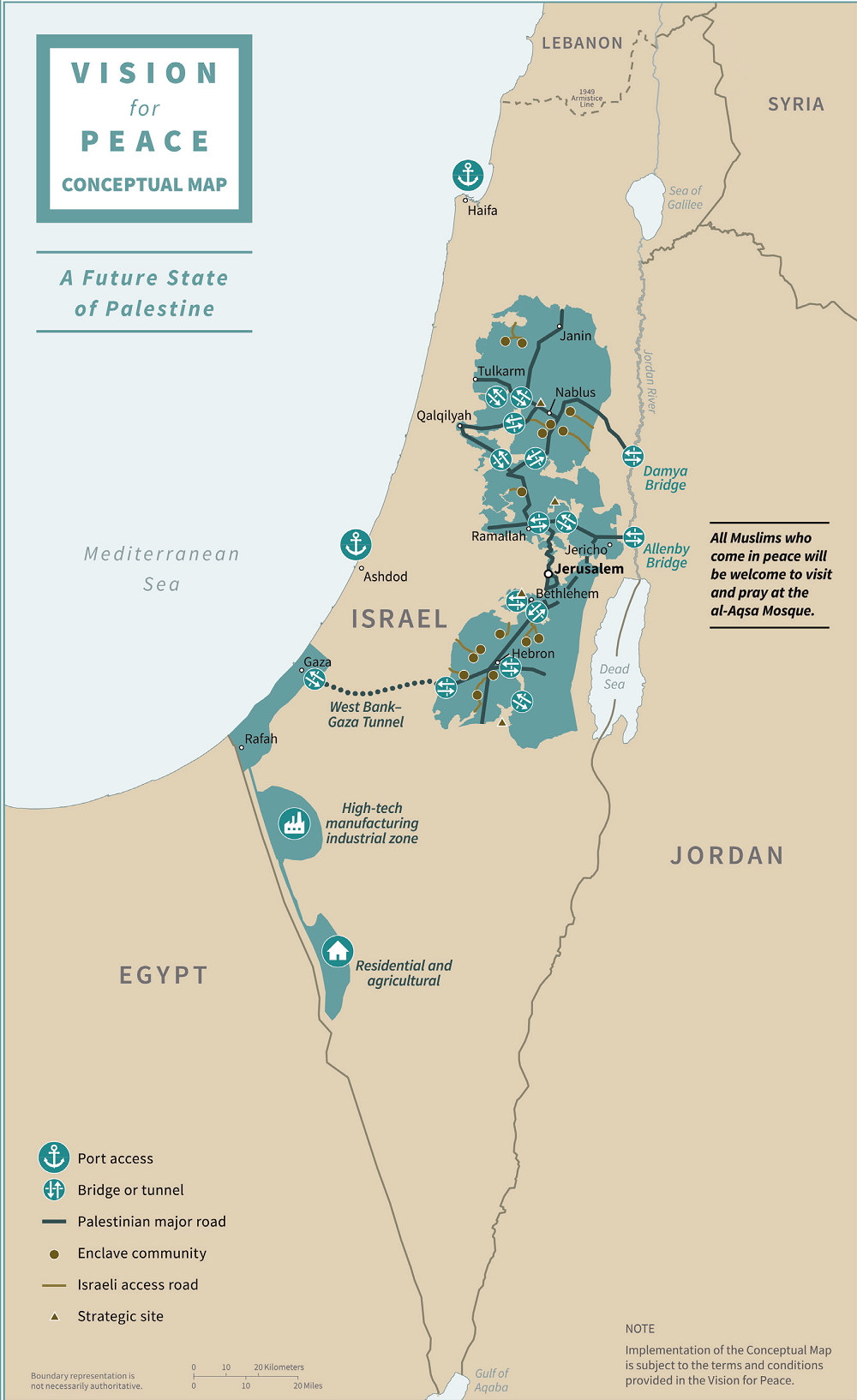 This “plan” is nothing but a prescription for more war and more violence.  It is heavy handed on the Palestinians and gives Israel everything they ever wanted……

Critics joined Palestinian leaders in rejecting the premise of the so-called “vision for peace,” which was drafted by the White House and Netanyahu without the input of Palestinians.

This is NOT a plan for peace…..but I did not think tha  amental midget and his drooling minions could possibly find an answer that would be acceptable…..the moving of the capital of Israel should have been the first clue.