Enter the 3 Blind Mice…….Pompeo, Pence, O’Brien go to Turkey to basically demand a ceasefire in Syria….

The whole things reminds me of the opening of Dr. No……

Secretary of State Mike Pompeo will join Vice President Pence on a trip to Turkey this week in an attempt to broker a cease-fire in northern Syria.

Pence will meet Thursday with Turkish President Recep Tayyip Erdoğan for a bilateral meeting as the two sides seek to broker a deal to end the bloodshed that was sparked after Trump announced he was pulling U.S. troops out of the region.

The delegation will depart on Wednesday. It’s unclear when they will return.

Trump’s desired ceasefire may not be the ideal answer…..

Russia said it was working to prevent a conflict between advancing Turkish and Syrian government forces on Wednesday, as Turkey’s president defied growing pressure and sanctions from Western allies for a ceasefire in northern Syria. Russia moved quickly to further entrench its leadership role in the region after President Trump ordered the pullout of American forces in northeastern Syria, the AP reports. The American move effectively abandoned the Kurdish fighters who were allied with the US and cleared the way for Turkey’s invasion aimed at crushing them. America’s abrupt reversal pushed the Kurds to strike a deal with the Russia-backed government of Syrian President Bashar al-Assad.

Late on Tuesday, Turkish President Recep Tayyip Erdogan vowed he would not accept a ceasefire in northern Syria, despite growing pressure from the US and Europe. Speaking to a group of journalists, Erdogan said Turkey would only consider a ceasefire once it had cleared the border region of Kurdish fighters that it considers a threat for links to an insurgency within its own territory. On Wednesday, Russian Foreign Minister Sergey Lavrov said that Russia is committed to ensuring security in the region as it works to mediate between the Syrian government and Turkey. Erdogan told journalists that he had rejected US offers to mediate. He also said Turkey was “not concerned” by US sanctions.

During a news conference with the Italian president Trump made some of his weirdest comments about the situation in Syria….

In what Politico calls “perhaps the president’s most dismissive defense of his widely condemned decision earlier this month to allow Turkey to invade Syria,” the president on Wednesday cast the US-allied Kurds as “not angels” who are fighting a battle “that has nothing to do with us.” In comments made from the Oval Office as he sat beside Italian President Sergio Mattarella, Trump had had this to say: “The Kurds know how to fight, and as I said, they’re not angels. They’re not angels, if you take a look. You have to go back and take a look. But they fought with us, and we paid a lot of money for them to fight with us, and that’s OK. They did well when they fought with us. They didn’t do so well when they didn’t fight with us.”

Politico notes the Kurds have turned to Syrian President Bashar al-Assad for support. “The Kurds actually are pulling back substantially from Turkey, and Syria is pulling in,” Trump said. But the New York Times writes he waved off concerns that he has provided an opening for Russia, Iran, and Syria to swoop into the area. “I wish them all a lot of luck,” Trump said. “If Russia wants to get involved in Syria, that’s really up to them.” In the AP’s view, “The president appeared to make light of the desperate situation the Kurdish fighters face with the loss of US military support,” and it points to this line as evidence of that: “They’ve got a lot of sand over there, so there’s a lot of sand that they can play with.” NBC News notes Trump characterized the decision to pull US troops as “strategically brilliant.”

Trump caught lots of flak from the GOP over his decision to bring the troops out of Syria…..but they are now kowtowing to the president and his ill conceived decision……

The Republican rebellion against President Donald Trump was short-lived.

Republicans unleashed perhaps their most aggressive outcry of the Trump era after he abandoned the U.S.’ Kurdish allies and ceded northeastern Syria to Turkey. But now GOP lawmakers are dialing back their direct criticism of the president — instead working with Trump, dinging Democrats and trying to move forward.

Just makes me more positive that the GOP is manned by spineless cowards that have NO morals left to use….

I will admit that I am with Trump when he says he wants to bring our troops home……I just think that he is going about it all wrong.

The Republican rebellion against President Donald Trump was short-lived.

Republicans unleashed perhaps their most aggressive outcry of the Trump era after he abandoned the U.S.’ Kurdish allies and ceded northeastern Syria to Turkey. But now GOP lawmakers are dialing back their direct criticism of the president — instead working with Trump, dinging Democrats and trying to move forward.

I find myself agreeing with Trump on ending our endless wars….however I do not agree with his strategy to do so…..

Retreating and abandoning allies may not be the optimum strategy

Whatever might be said about Donald Trump, I always figured him for a savvy New Yorker who knew a good deal when he saw one.

A prime example was in Syria where the commander in chief, despite understandable misgivings about foreign entanglements, had deployed a small contingent of highly skilled troops to accomplish a mission vital to America’s national security.

In military jargon, President Trump was employing “economy of force.” In the context of recent history, he had adopted what might be called a Goldilocks Doctrine.

I wish I could feel better about this decision by our president……but sadly I feel it will not make things better at all. 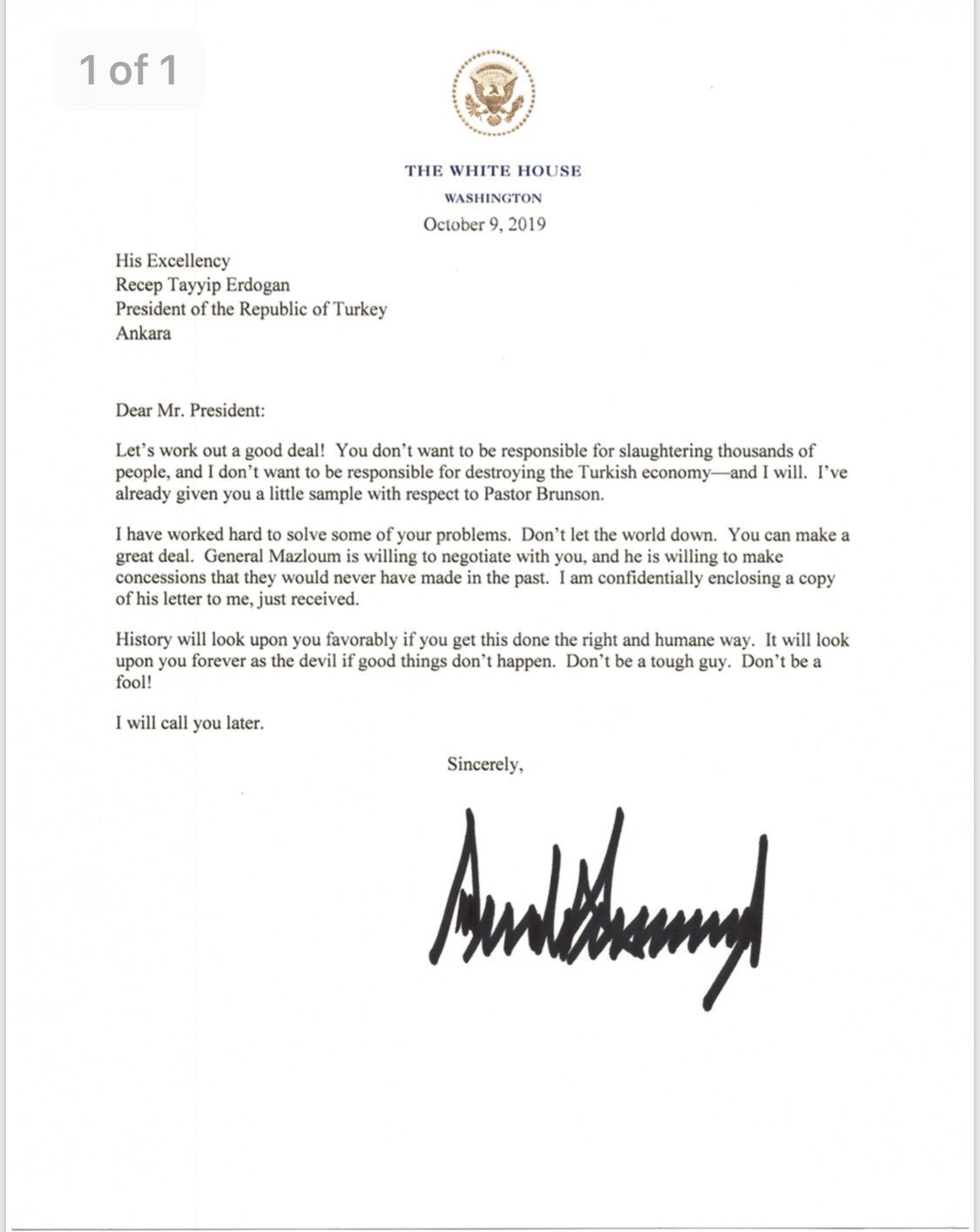 10 thoughts on “Turkey And Syria”