There are those true conservs that are fed up with the Trumpian BS and have decided that they may start a third party so the country can have true conservatism once again…..

Christine Todd Whitman and Tom Ridge are among the more than 100 Republicans who have said they’ll sign a letter demanding that the party change direction. If it doesn’t, the group warns, the GOP can expect to be challenged by a third political party. The group is opposed to former President Trump’s continued control of the Republican Party, the New York Times reports. “When in our democratic republic, forces of conspiracy, division, and despotism arise, it is the patriotic duty of citizens to act collectively in defense of liberty and justice,” says the statement’s preamble. The letter, which is scheduled to be published Thursday, calls on Republicans to “either re-imagine a party dedicated to our founding ideals or else hasten the creation” of an alternative party.

Other former officeholders behind the letter include Mary Peters, Charlie Dent, and Barbara Comstock. Former Rep. Denver Riggleman said the group would prefer not to start another party, per USA Today. “The objective is to create a common sense coalition and policy-driven movement that pushes back against disinformation like the Big Lie” about the 2020 presidential election, Riggleman said. One of the organizers is Miles Taylor, a former Trump administration official who anonymously wrote a New York Times oped piece critical of the president in 2018, as well as a book. He said former governors, party chairmen, Cabinet secretaries and state officials plan to sign the letter, which Taylor called the first step. “If we can’t get the GOP back to a rational party that supports free minds, free markets, and free people,” he said, “I’m out, and a lot of people are coming with me.”

For more information on this possibility…..https://www.rawstory.com/republicans-threaten-leaev-party/

Will they make good on this threat?

How successful will they be in the age of Trumpism and misinformation?

We already have a centrist party….the Dems….what we need is more progressive thinking.

I am all for a third party….but I do not think it will be one that I will support….but I need to see their platform before I rule them out.

There those out there (of which I am one) that believes that there needs to be a standardize educational program on civics.

For too long the subject of civics has been ignored and attempted to reign the subject to the dust bin of history (I always like the saying)…. most Americans are ignorant on the use of civics and how the government works….

Look at the last election and the response by Americans…..where about 10 millions Americans think the election was stolen or somehow illegitimate…. which NO evidence has proven the claims of a stolen election….all of which lead to the insurrection of 06 January….

So I agree with a statement from the Claremont Institute…..that there needs to be an educational counter-revolution.

Williams argues that what passes for civic education today advances “the goal of wholesale revolution and the institution of a monstrous and unnatural tyranny.”

In light of these daunting circumstances, however, he counsels hope: “We at Claremont are happy warriors, and there’s no work we’d rather be doing with friends and fellow citizens.”

Williams describes The Claremont Institute, founded in 1979, as a think tank fomenting a “counterrevolution” to recover civic education through teaching, writing, and litigation. Its mission, he continues, is to restore the natural law and natural rights principles of the Declaration of Independence, the “ingenious political science of the Constitution,” and the “popular constitutionalism and reverence necessary for the maintenance of free government” to “their rightful, preeminent authority in our national life.”

I believe that civics is one of the most important subjects that needs more attention in our educational system.

Coming soon is a post on a new civics project….something that is desperately needed….some may ask why….this cartoon says it all for me…. 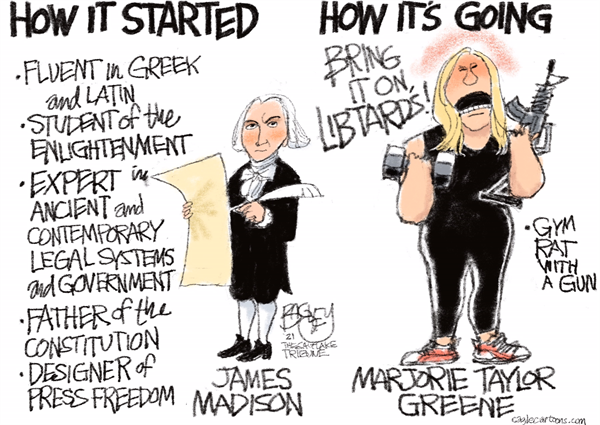