…..and the news from 2020 is NOT at all encouraging even after the Pentagon has tried with a outreach program…..

The number of deaths by suicide among military service members increased alarmingly in the fourth quarter of 2020, according to the Defense Department’s latest quarterly report.

The military recorded 156 deaths by suicide among all services, including active-duty, National Guard and Reserve troops, from Oct. 1 to Dec. 31 last year. That is a 25% increase from the 125 such deaths that occurred in the last quarter of calendar year 2019.

The bulk of the increase came among Guard troops, who saw such deaths increase from 14 in the fourth quarter of 2019 to 39 in 2020. Deaths by suicide among reservists increased by seven, from 11 to 18, over the year. Suicide deaths among active-duty troops actually dropped slightly, from 100 to 99.

There is a problem and the Pentagon needs to spend more time working on the cause and solution than it does trying to build a better mouse trap for more war.

This news is unacceptable and pathetic.

The Pentagon is treating our troops like a tool that is broken….throw them away and get a new one to replace it.

Why does it seem that no one gives a sh*t about this rising problem?

By now we all have heard of the attempts to suppress the vote in many Red States…..Georgia has one of the most restrictive….it even includes a portion that bans anyone from giving food or water to people waiting in the hot Southern sun…..

The GOP governor then responded to criticism of the law’s provision limiting the distribution of food and water at polling stations, confirming that polling centers can still provide refreshments and that people can bring their own food and water with them.

“They can order a pizza. They can order Grubhub or Uber Eats. The county officials can provide water stations,” he said, adding that the restriction on handing out food and water “is just within 150 feet of the precinct.”

“If you’re 151 feet, campaigns can set up tables, food trucks, they can hand out flyers, put up signs,” he continued. “This has been the case in Georgia for a long time and many, many other states.”

Several social media users condemned Kemp for suggesting that voters order food, with some saying that the statement was “tone deaf,” as many people may not be able to afford food delivery services.

He is trying to walk back a restrict and unfair law….and illustrates just how much of political hacks they truly are.

These morons just cannot help being stupid…..and are prime examples of the statement that you “can’t fix stupid”…..

This was not too popular on my op-ed blog, Gulf South Free Press, so I decided to re-blog it here…..just my thoughts of what I see with the people and their love of guns…..this is becoming a slow acting cancer that will eventually enter into stage 4……chuq

These days with all the ease to obtain guns even assault weapons the US is becoming an armed camp….it is becoming ‘us against them’ once again.

While the debate over gun rights rages….the population is quietly arming themselves…..not sure why other than some delusional bullsh*t.

For years now the militias like the Oath Keepers and so many more have been gaining members and arming themselves for the coming fight with the government.

If you are not sure just what these militia groups want or stand for then maybe this will help a bit….https://en.wikipedia.org/wiki/American_militia_movement

I remember back in the 60s when the Black Panthers were photographic with guns the press and country lost their minds. 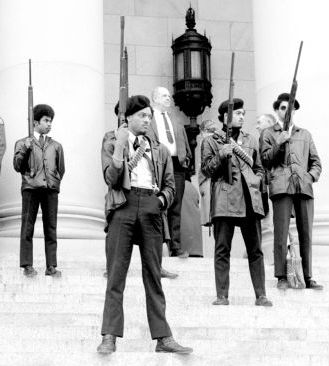 There was a concern that there would soon be a ‘race war’ in the US and of course the whites started arming themselves in case there needed to be a response to the coming race war….a…

Finally after years of my bitching and ranting like me and others about our endless wars….one of them may be ending…..Afghanistan……..

President Biden confirmed Wednesday that he will not be taking the Afghanistan war into its third decade. “It’s time to end the forever war,” he said in a speech from the Treaty Room of the White House, which CNN notes is the same room in which George W. Bush announced the start of US military involvement in Afghanistan after the 9/11 attacks almost 20 years ago. “War in Afghanistan was never meant to be a multigenerational undertaking,” Biden said, per the New York Times. “We were attacked. We went to war with clear goals. We achieved those objectives.” Biden plans to withdraw all US troops by Sept. 11 this year. Around 2,500 US troops are left in the country. NATO officials said after Biden’s speech that the alliance plans to withdraw its 7,000 troops from the country along the same timeline.

Biden said it was time to “end the cycle” of extending the American presence in the hope of creating better conditions to pull out. “I am now the fourth American president to preside over an American troop presence in Afghanistan. Two Republicans. Two Democrats,” he said. “I will not pass this responsibility to a fifth.” Unlike the deal Donald Trump negotiated with the Taliban last year, Biden’s withdrawal plan is not conditions-based, officials say. Biden said he spoke with George W. Bush and Barack Obama before announcing the decision. After the speech, Biden visited Arlington National Cemetery and said it was “absolutely clear” to him that withdrawing from Afghanistan was the right move, the AP reports.

“Never meant to be a multi-generational war”….if not then why was it?

They say (whoever they are) that the American people are tired of war,,,,,,then where were those voices?  I have heard very little opposition to war.

I know why….but I will pretend that this was good faith by Biden.

Good news our troops are coming home to their families (for now)…..but maybe not ALL our troops….

The Times report reads: “Instead of declared troops in Afghanistan, the United States will most likely rely on a shadowy combination of clandestine Special Operations forces, Pentagon contractors and covert intelligence operatives to find and attack the most dangerous Qaeda or Islamic State threats, current and former American officials said.”

I applaud Biden for this action….but there is a caveat here…..

They are coming home because the Pentagon is gearing up for the confrontation of China in the China Sea.

This is excellent news on the one hand and disturbing on the other.