My final thoughts of the day and of this election…..

President Trump addressed a crowd that appeared to be largely maskless inside the White House just before 2:30am Wednesday, noting as he came out, “This is without question the latest news conference I have ever had.” He thanked Americans for their support and quickly rolled out his oft-repeated and baseless claim about election fraud: “Millions and millions of people voted for us tonight, and a very sad group of people is trying to disenfranchise that group of people, and we won’t stand for it.” He went on to essentially declare victory in Georgia and North Carolina, which have not yet been called, and suggested Pennsylvania and Michigan, which also have not yet been called, will easily go his way.

He also suggested multiple times that his team had been preparing for a big victory celebration that, he implied, had to be called off due to Democratic interference; he accused them of going to court in order to steal the election there. “This is a fraud on the American public,” he said in extensive concluding remarks. “This is an embarrassment to our country. We were getting ready to win this election, frankly, we did win this election. … So our goal now is to ensure the integrity, for the good of this nation, this is a very big moment. This is a major fraud on our nation. We want the law to be used in a proper manner, so we’ll be going to the US Supreme Court. We want all voting to stop. We don’t want them to find any ballots at 4 o’clock in the morning and add them to the list. It’s a very sad moment. … We will win this, and as far as I’m concerned, we already have won it.”

Your typical fare from a psychopathic leader that wants to try and sway the count…..maybe there is a spot at Arkham Asylum in Gotham.

There was NO Blue Wave that had been predicted by so many pundits.

The Lincoln Project was a bit effective but a total lack of support from Repubs….so will Moderate Repubs turn to Trump as their savior now?

Basically the country is a 50-50 split between authoritarianism and democratic ideals…..tribalism is here to stay (at least for awhile).

Most Americans do not give a fig about how Milwaukee voted….we want to know who is gonna be the president not how downtown Chicago voted…all that crap is just filler to justify their existence as a news source.

If this is the best the Democratic Party can do then it is time for it to evaluate itself and look for a message that the American people want to hear….so far theirs sucks!  They, Dems, lost seats in the House and even lost a seat in the Senate….a seat they could not afford to lose.

One thing that will be certain….the myth of 2 Americas is NO myth…the divisions will remain….the hatred will remain…..the demonizing will remain…..there will be very little bi-partisanship……the GOP has settled on its true nature…..the Dems are still looking for that message that has eluded them for 20 years.

As usual there is a slower tempo after the larger states are called…..and so far it still is looking like a draw in the voting…..

The results according to NBC News…..

Now for the AP predictions…

The results so far, with electoral votes in parenthesis:

The House results so far……

If you want to see for yourself and not take my word then by all means…..https://apps.npr.org/liveblogs/20201103-election/

Well the biggest news is that the pundit dream and predictions of a Blue Wave was barely a short tide ripple….but it is still fun to listen to the Dems say how happy they are with the outcome….as small as it is….what pathetic little slugs.

Updated Mississippi news…..medical marijuana has been voted to be legalized….

Medical marijuana is coming to Mississippi under Initiative 65, the more-expansive and detailed option voters considered.

About two-thirds of voters said they wanted to allow a medical marijuana program. And about 75%of respondents chose Initiative 65, the measure that qualified for the ballot earlier this year on the strength of citizen signatures.

Once again we learned that polling is about as useless as screen doors on submarines….even with the improvements from 2016 and yet they are still completely wrong….so why do we keep using them on a daily basis as a conversation driver for the media?

Maybe time to re-define who is Latino or to cease using the term all together…..because the one using these days is not accurate….especially when it comes to Florida…..and the Rio Grande valley…..

Partisanship is what we will have for a generation…..and the tribalism and rhetoric will be around for more years than I have left on this Earth.

More updates to come if necessary……

That was a slogan that the Biden campaign started using….and I wonder if that is it?  Are we looking for the very soul of our great nation?

I visited several polling stations and talking with a few people and there was an average of about an hour wait to cast one’s vote…..no problems other than the waits.

No surprises here….Trump wins and all down ticket thugs did as well.

Mississippi will fly a new state flag with a magnolia and the phrase “In God We Trust,” with voters approving the design Tuesday. It replaces a Confederate-themed flag state lawmakers retired months ago as part of the national reckoning over racial injustice. The magnolia flag was the only design on the general election ballot, and voters were asked to say yes or no. A majority said yes. Legislators will have to put the design into law, but they are expected to do that with little fuss because they already did the hard work of retiring a flag that some people wanted to keep, the AP reports 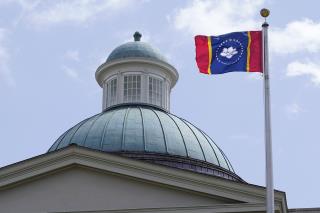 This will be my election analysis…..as best I can offer at this hour.

All the polls are now closed, and one thing is clear: The major battleground states will tell the tale of the presidency. It’s just not clear when. President Trump picked up two important victories after midnight, when Florida and Ohio were called for him. Florida was all but a must-win for his re-election hopes. Still, Joe Biden continues to have paths to victory, and the winner will be determined by swing states that could not yet be called, including Pennsylvania. Meanwhile, Trump and Biden each racked up expected victories, with Biden dominating in the Northeast and the West Coast, and Trump in the South, notes the Wall Street Journal.

The only thing so far that I can say is the the Clintonian pundit James Carvell predicted that we would know the winner by 10 pm…..he was wrong and now maybe it will be the last time we have to hear from this dinosaur again.  So far all the predictions and polls have been wrong as usual….

So far it appears to be a dead heat…..which was not predicted.

Sorry to Biden. the “soul of the nation” will not be reclaimed no matter who wins this exercise it futility…..the tribalism will remain and the GOP will sink into the marsh of uselessness.

And now the pundits will start blame game shaming people for their votes…..and pointing the fingers at…well who else but Russia.  (And that would be a great post for next week)…but first we have to get past the rhetoric of the day and the pundits making their excuses for not knowing what the Hell they have been saying for 2 years.

Do we really need to know how Clinton did in 2016….I do not care that was 4 agonizing four years ago I want to know about today and if I need to start planning for the nukes to fall….Clinton lost, Trump won in 2016…..in case anyone was not aware.

All in all the MSM has been a total wash on the coverage…..but it is fun to watch them scramble to explain why all their BS has been wrong for so long.