Every American is well aware of the complete clusterf*ck that the Middle East has become……the best description would be F.U.B.A.R.

Thanx to the Bush family this country has spent at least a trillion dollars….that is trillion with a “T”…….the next point to be made should be….how much more are we willing to spend before someone admits that they created a clusterf*ck that cannot be solved with more war?

We have it on highest authority: the recent killing of Taliban leader Mullah Akhtar Muhammad Mansour by a U.S. drone strike in Pakistan marks “an important milestone.” So the president of the United States has declared, with that claim duly echoed and implicitly endorsed by media commentary—the New York Times reporting, for example, that Mansour’s death leaves the Taliban leadership “shocked” and “shaken.”

But a question remains: A milestone toward what exactly?

Source: How Many Trillion More Will the Pentagon Spend on Middle East Wars Before They Confront the Disaster They’ve Created? | Alternet

Instead of searching for the best solution to the situation the US just keeps throwing money, men and weapons at the problem…..

The taxpayer needs to make this government account for all the cash they are pissing away in the name of……well I am not sure what the name is….are you?

I have been reporting that something is just hinkey with the Clinton Foundation and the Clinton Department of State……I kept seeing all the deals that the donors to the foundation got over her years at state and thought that those types of deals should preclude her from running and should definitely keep Bill out of the White House again…. 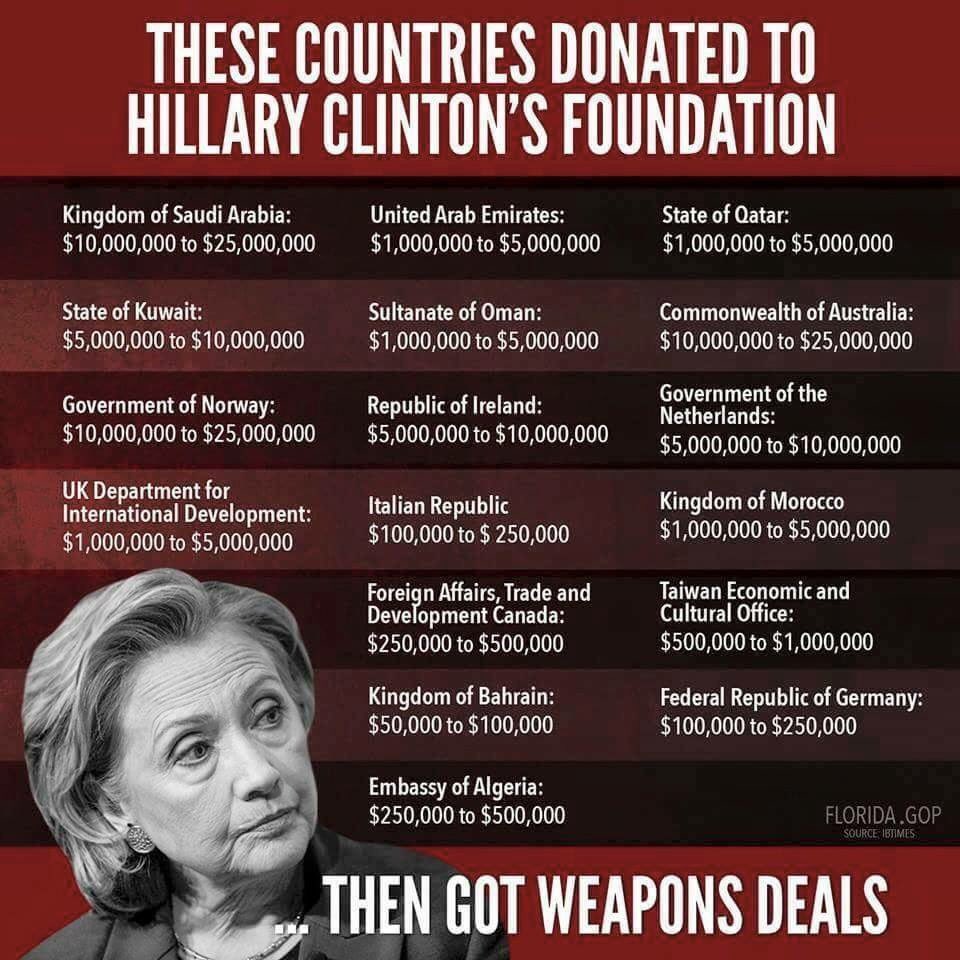 Even by the standards of arms deals between the United States and Saudi Arabia, this one was enormous. A consortium of American defense contractors led by Boeing would deliver $29 billion worth of advanced fighter jets to the United States’ oil-rich ally in the Middle East.

Israeli officials were agitated, reportedly complaining to the Obama administration that this substantial enhancement to Saudi air power risked disrupting the region’s fragile balance of power. The deal appeared to collide with the State Department’s documented concerns about the repressive policies of the Saudi royal family.

But now, in late 2011, Hillary Clinton’s State Department was formally clearing the sale, asserting that it was in the national interest. At press conferences in Washington to announce the department’s approval, an assistant secretary of state, Andrew Shapiro, declared that the deal had been “a top priority” for Clinton personally. Shapiro, a longtime aide to Clinton since her Senate days, added that the “U.S. Air Force and U.S. Army have excellent relationships in Saudi Arabia.”

Do you think that this should be brought out for all to see the deals that the countries got from the state department under the leadership of a Clinton?

It is nothing new that politicians are mostly liars and full of crap….but recently the king liar award goes to our Sec of State, John Kerry.

MSNBC’s Chris Hayes interviewed John Kerry about the Saudis war on Yemen.  He mentioned the recent belated decision to block the transfer of cluster bombs to the Saudis, and pressed Kerry on why the U.S. was arming the Saudis. Kerry’s answer is notable for its repetition of a shamelessly pro-Saudi line:

Saudi Arabia was literally threatened by virtue of the Houthi placing missiles along the Saudi border aimed at Saudi Arabia, and there were cross-border incidents taking place in a way that threatened Saudi Arabia. And they together with other countries and ourselves felt that it was important…and so there was a reason for a coalition to respond to that.

It is very important to understand that what Kerry said here isn’t true. This never was a war of self-defense, and it compounds the U.S. disgrace of aiding the Saudis’ war to claim that it was. The Saudi-led coalition intervened specifically to reinstall the deposed president and drive the Houthis out of the capital, and it did so shortly after Hadi had fled to Riyadh. The goals of the intervention were always far more ambitious and sweeping than what Kerry says here, and it is unfortunate that he wasn’t challenged on this point. The issue fourteen months ago was not that the Saudis were actually threatened by the Houthis, but that their preferred ruler had been driven out of the country and they wanted him to be reimposed. The Saudis and their allies chose to make Yemen’s conflict their own, and this administration chose to help them do that. The U.S. is still helping them batter and starve Yemen today.

John Kerry this week waved off concerns about U.S.-supported Saudi-coalition airstrikes in Yemen that have indiscriminately bombed civilians and rescuers, and instead blamed the Shiite Houthi rebels for the bulk of the civilian casualties.

“There have been a lot of civilian casualties, and clearly, civilian casualties are a concern,” Kerry told MSNBC’s Chris Hayes. “I think the Saudis have expressed in the last weeks their desire to make certain that they’re acting responsibly, and not endangering civilians.”

The typical dance of a yes man bureaucrat…in other words…he was lying through his capped teeth.

But then what would you expect from a DC insider given the reins of the State Department?

The news we are getting about the battle against those pricks in ISIS is pretty good….we have taken out their money stores, their gas supply, a couple of leaders and the ISIS opposition is making headway on just about all fronts…..

With the barbarians getting their asses handed to them….especially in Iraq and Syria…..and they are defeated, as promised, the question should be……What then?

The Unz Review attempts to answer this question……keep in mind that this site has a decidedly Libertarian tilt to it…….

Isis is under attack in and around the last three big cities it holds in Iraq and Syria – Fallujah, Mosul and Raqqa. It is likely to lose these battles because its lightly armed if fanatical infantry, fighting from fixed positions, cannot withstand air strikes called in by specialised ground forces. They must choose between retreating and reverting to guerrilla war or suffering devastating losses.

It is two years since Isis launched itself on the world by capturing Mosul, the second largest city in Iraq, though it had already taken Fallujah 40 miles west of Baghdad at the start of 2014. In its first campaigns, its ability to achieve surprise by using mobile columns of vehicles packed with experienced fighters was astonishingly effective.

Source: Isis faces likely defeat in battles across Iraq and Syria – but what happens next? – The Unz Review

All our leaders have promised that the ISIS group will be defeated….that includes all the presidential wannabes also……but not one of them has an answer for…..when they, ISIS, is defeated–what then?

But before one can claim a win, the defeat of ISIS, there are a few other varibles that need consideration……

Attempting to defeat IS without beginning to address the political and structural failures that have led to these circumstances borders on the ridiculous.

With the beginning of separate offensives against the Islamic State (IS) in Fallujah and Raqqa, many analysts are highlighting that this is the beginning of the end of IS, with Mosul next in sight. However, there is one key issue with this analysis; these offensives do nothing to address the structural failures in both Iraq and Syria that led to IS’ rise. Moreover, there is no valid plan for the governance of the people being ‘liberated’ from IS. Without addressing these issues, history will repeat itself and IS will either return or morph into another radicalised entity looking to represent marginalised Sunnis.

The war against ISIL has entered a critical new phase. The group is facing a multipronged offensive threatening at least three of its most vital strongholds in Syria and Iraq.

The strategic significance of the areas under attack mean the group will have little choice but to put up a serious fight, which will then help the US-led coalition to better assess and target the current capabilities of its enemy. Similarly, the way the assault is conducted will determine whether the new phase is the beginning of the end for the group or the start of a new cycle.

Source: Are we witnessing the beginning of the end for ISIL? | The National

ISIS can be defeated….but there needs to be thought for what will come next.

Don’t forget….there is still AQ and the Taleban……what will be their part in the coming years?

Yesterday it is all but official…..the nominee for the Dems will be Hillary Clinton…..most know that I am NOT a Clinton fan…all I can say now is….You asked for it and now you have it….live with your decision.

But I believe that the foreign policy of Clinton is as scary if not more so than anything Trump has muttered to date.

Yes, I think the foreign policy is the most important issue in this election.  We are fighting war after war and No one seems concerned about the fact that we are stretching this country’s resources to a breaking point.

Yes Trump’s foreign policy, if we can call it that, is way scary…..But Clinton scares me more….at least Bernie has the right idea but I do not see him able to put it into action if elected……

Bernie Sanders responded to Hillary Clinton’s foreign policy speech on Thursday with a hit at her credentials, including her involvement in the Iraq War and so-called “regime change” in Libya.

“We need a foreign policy based on building coalitions and making certain that the brave American men and women in our military do not get bogged down in perpetual warfare in the Middle East,” he said in a statement. “That’s what I will fight for as president.”

Source: Sanders to Clinton: Yes, Trump’s Foreign Policy Ideas Are Scary. But So Are Yours | Common Dreams | Breaking News & Views for the Progressive Community