Finally a few days away from the mindless dribble of the Right and the profound constipation of the Left…..today I would like to talk about food.

But first…have you ever had an onion start sprouting in storage….I cut the top off with the sprouts and plant them….the last time I got 11 small red onions from my effort….. 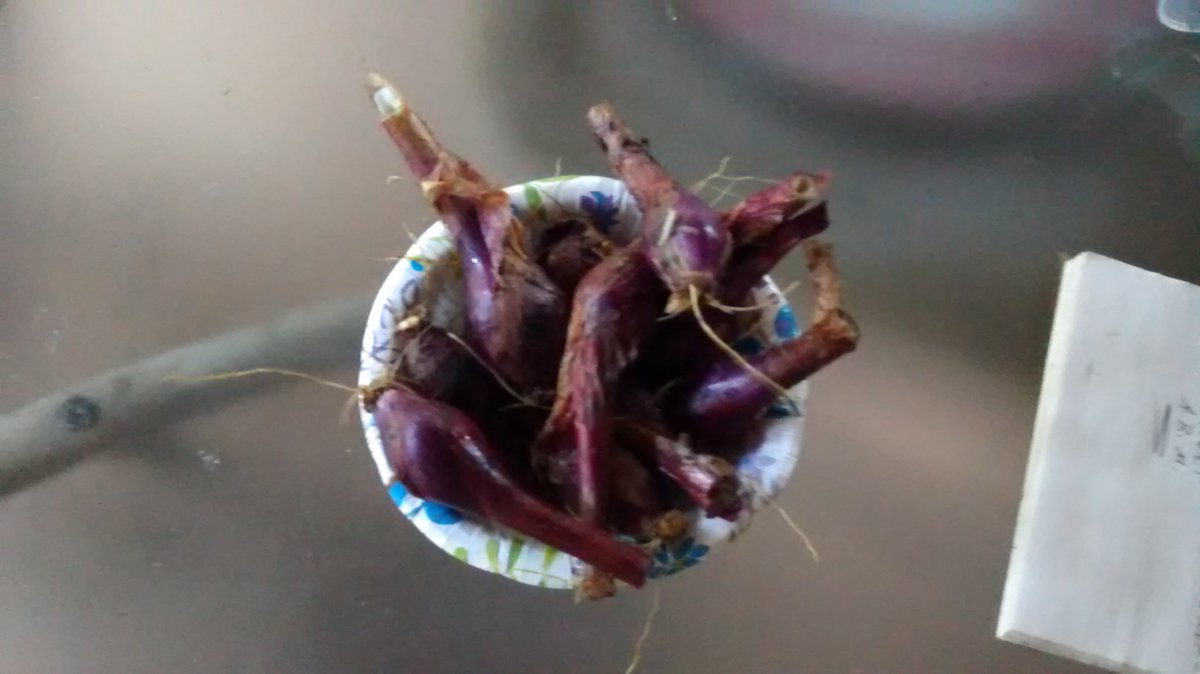 And now for the harvest of the morning….my first yellow tomato of the season….. 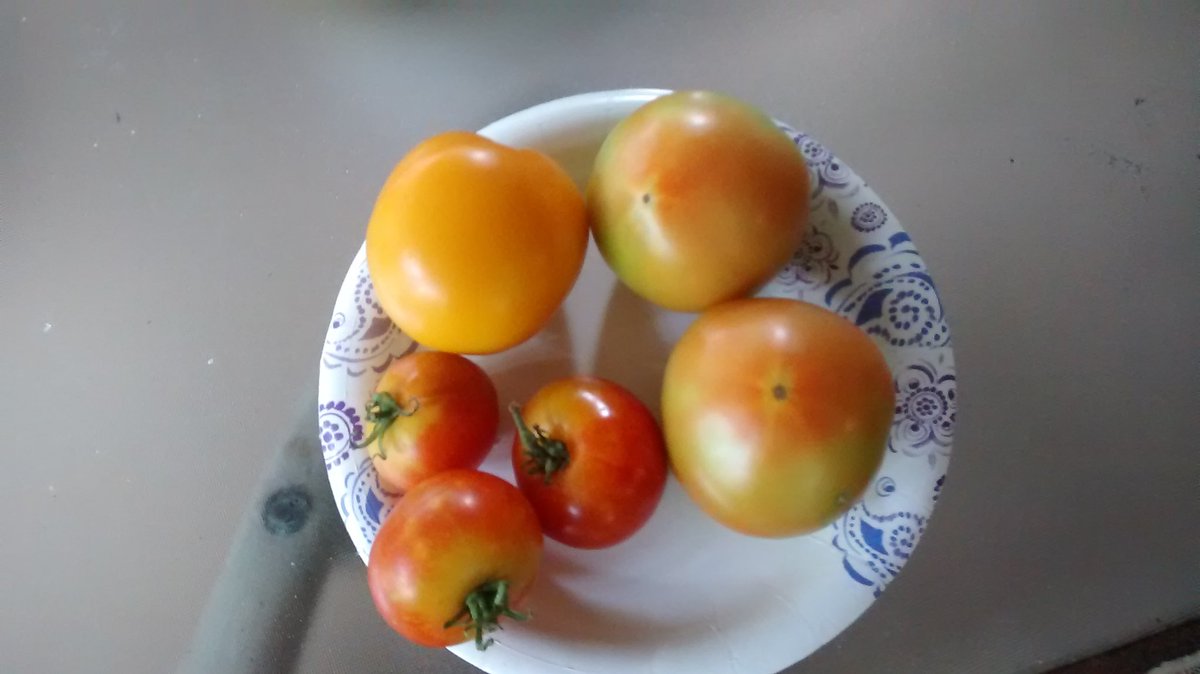 And finally with home grown ingredients I will make fresh salsa… 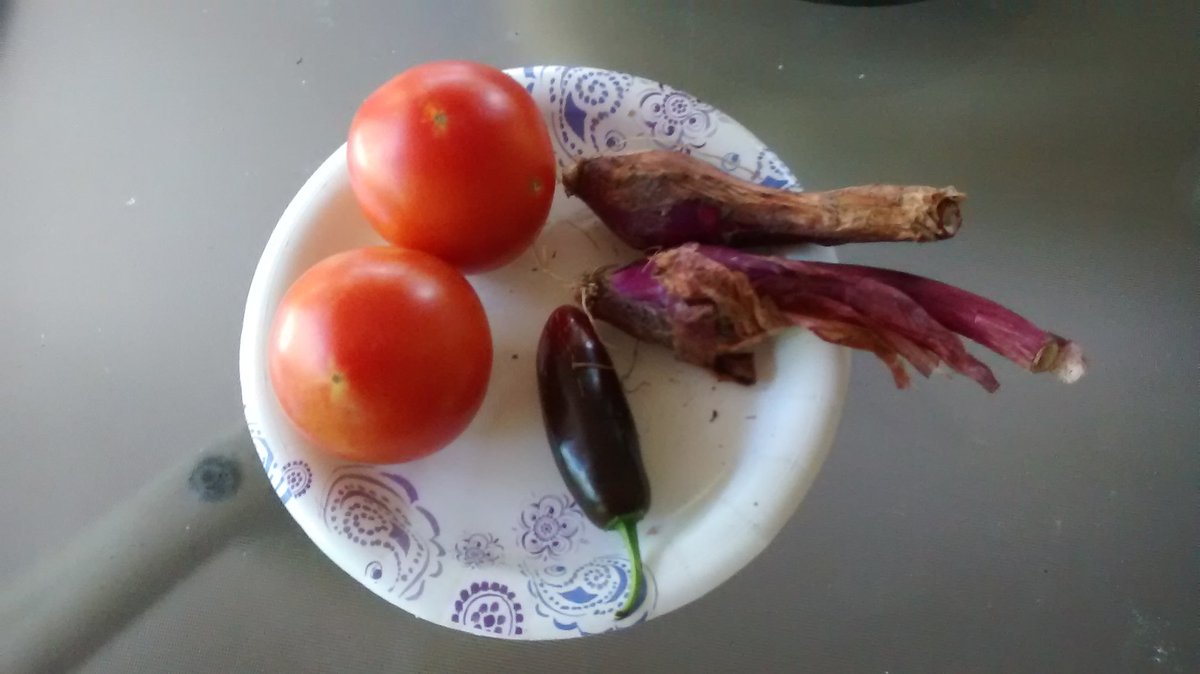 On to more important things…..I do not diet per se….I do use a modified version of the Mediterranean diet….I am not a fan of fish so it is off the menu….I read an article about this diet and its possible good results….

Women who’ve survived breast cancer and are looking to prevent a recurrence may be encouraged by news out of a major cancer conference: that adhering to a Mediterranean diet (lots of fruits, veggies, fish, and olive oil) may help fend off the disease’s return, the Guardian reports. For their experiment, revealed at the American Society of Clinical Oncology’s annual meeting in Chicago, researchers at Piacenza Hospital in Italy studied two groups of women who had been treated for early breast cancer: 199 who ate Mediterranean-style (including an allowance for one alcoholic drink daily) and another 108 who ate what they usually did, but with healthy-eating input from a dietician. After three years of following these diets, none of the ladies who went Mediterranean suffered relapses, while 11 women from the other group did. Science World Report notes these results add onto the news from another, much larger recent JAMA study that found a Mediterranean diet rich in extra-virgin olive oil led to a 68% reduction in the risk of developing breast cancer.

There are drawbacks to the new study—notably, the small sample size, the relatively short follow-up time of three years, and other methodology issues, critics say. “People were asked to participate in one diet or the other,” the Dana-Farber Cancer Institute’s director of clinical research tells the Guardian. “There is no information about the activity level or change in weight which, for most of the lifestyle research, one needs to be aware of.” And the CEO of UK charity Breast Cancer Care says that while any info about how to possibly keep breast cancer from coming back is a “welcome addition to our toolbox,” there’s no universal panacea. “Lifestyle choices like eating a well-balanced diet, [partaking in] regular exercise, and maintaining a healthy weight can all help reduce the risk of cancer coming back, but they can’t prevent it completely,” she notes, per the Independent. (America is slowly but surely moving toward a more Mediterranean way of eating.)

For my last piece of health news for my readers…..

The Pharma companies spend billions on research and then make many billions after they release their new drug and then there are a wealth of lawyers that sue the companies after that…….

The problem that few know of is that of the antivirus game……..

The Antivirus industry has a dirty little secret that they really don’t want anyone to know. Despite the claims of their marketing departments, their products are not all that effective. Many of them are only protecting against at best 80% or 90% of the threats out there in the wild at any time, and their protection against ransomware is very bad.

Let’s look at that in more detail. AV products need to protect against two general types of threats: ones that are known and threats that are unknown. The ones that are known, they have a signature for so that they can detect the threat and get rid of it. This is called reactive detection.

Evidence is mounting that doctors who receive as little as one meal from a drug company tend to prescribe more expensive, brand-name medications for common ailments than those who don’t.

A study published online Monday in JAMA Internal Medicine found significant evidence that doctors who received meals tied to specific drugs prescribed a higher proportion of those products than their peers. And the more meals they received, the greater share of those drugs they tended to prescribe relative to other medications in the same category.

Source: Big Pharma’s big scam: This is why your prescription medication is so absurdly expensive – Salon.com