FYI and History all in one place and on a Saturday to boot…….does life get any better?

Our all knowing president use to own the Miss Universe beauty thing…..have you ever asked where this staple of society got its start?

Well the Old Professor has your history lesson prepared (for those interested)….

There are lots of history blogs out there in the blogosphere….but not that many give the really cookie histories……you can depend on IST to be different…..

Beauty contests were first brought to the attention of the public back in the early days of the Byzantine Empire…..

Men in pursuing intimate relationships are usually attracted to beautiful women. Today, that preference tends to be disparaged. For being attracted to a woman who was not fat, one young man recently was called bigoted and mean, and he was slapped. At a much higher level of social salience, the Harvard men’s soccer team recently had their whole season canceled because some team members were privately rating the attractiveness of members of the women’s soccer team. Simply stating that young, slender, warmly receptive women are much more sexually attractive than old, fat, bitterly men-hating women is well on its way to becoming a criminal offense in modern, democratic societies.

It is possible that there were other occasions in his but this is the one that got set down in the histories….

After reading this let your mind wonder to the past…..what were the categories?  How about the wardrobe?

Do let me know your thoughts.

The weekend begins and Mississippi is about to enter the 21st century….a long journey to arrive there….

I have been keeping my readers up to date on the journey my state of Mississippi is having replacing the the racist flag from the past.

And now we have a winner of the Mississippi state flag lotto…..

Mississippi voters will decide whether to accept a new state flag with a magnolia to replace an old one legislators retired under pressure because it included the Confederate battle emblem that’s widely seen as racist, the AP reports. A commission on Wednesday voted 8-1 to recommend the magnolia over one other final design that featured a shield with wavy lines representing water. “We’ll send a message that we live in the future and not in the past,” former Mississippi Supreme Court Justice Reuben Anderson, the flag commission chairman, said after the vote. The single design will go on the November ballot. If voters accept the design, it will become the new state flag. If they reject it, the design process will start anew—and Mississippi will remain a state without a flag for a while longer.

The commission decided Wednesday that in the weeks leading to the November election, it will promote the magnolia flag by calling it the “In God We Trust” flag. “More than any other time in our country, we need the mercy and grace of God,” said commission member TJ Taylor, who is an attorney and policy director for the state House speaker. After the meeting Wednesday, the magnolia flag was raised on a pole outside the Old Capitol Museum in Jackson, where it fluttered in a brisk breeze. Requiring the religious phrase on the new flag helped persuade some conservative legislators to retire the old one. Legislators shelved the Confederate-themed flag two months ago against the backdrop of widespread protests over racial injustice.

And the winner is….. 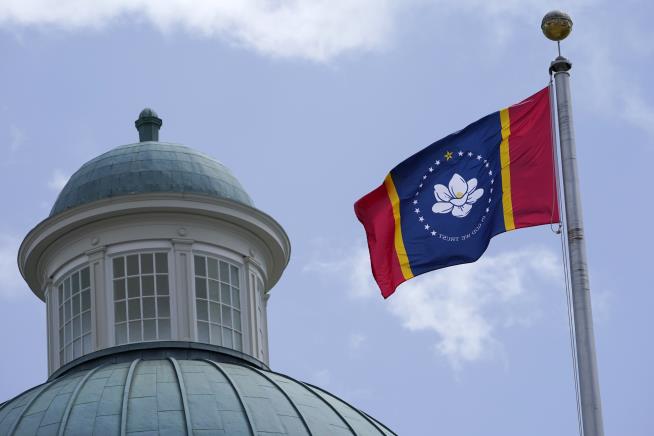 At least this flag is heads above the runner-up…..

Enjoy your Labor Day weekend with family and friends…..

Be well and be safe