Is that a holiday for mayonnaise? 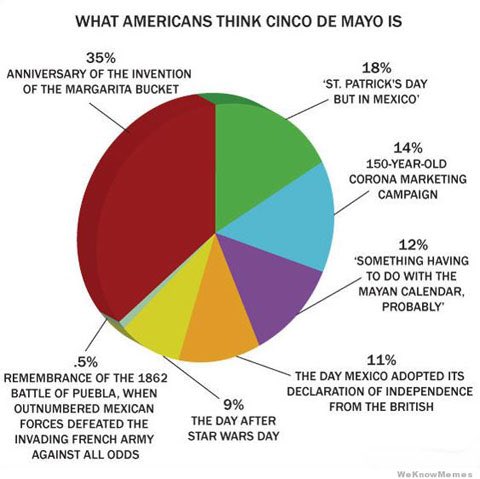 NO it is a Mexican day to celebrate and we Americans with our hate for anything immigrant like will consumer millions of glasses of beer….and eat tons of guacamole……

As avocado lovers prepare to ingest a massive amount of guacamole during the upcoming Cinco de Mayo holiday, Bloomberg explains why that guacamole will come at a heftier cost: The price of avocados has set a record, more than doubling since last year. This higher price tag will be reflected both at the grocery store and in US restaurants that are finding creative ways to serve the trendy fruit. We break down why you’ll be forking over a pretty penny for that tasty avocado toast:

Avocado growers had a bad year. Avocado crops tend to vary, yielding more growth one year, less growth the next. A smaller crop is expected this season in Mexico as well as California, where a 44% decrease has been predicted. And a growers strike in Mexico last year did not help matters.

So be prepared to spend more for you festivities…..enjoy and be safe……

Time to withdraw to the drawing room and enjoy my Modelo and guacamole….I will return tomorrow with more stuff for your consideration….let the weekend begin!  chuq

Before I begin the Syria post there is some sad news to report……another US service man has been killed in action…..

A U.S. service member has been killed during an operation against al-Shabab militants in Somalia

The U.S. military said Friday that the service member was killed near Barii, Somalia, approximately 40 miles west of Mogadishu.

The statement from the military’s Africa Command said U.S. forces were conducting an advise and assist mission alongside members of the Somali National Army.

The story about the use of chem weapons on the civilian population of a Syrian town lead to the response by the US….a multi-missile strike on a Syrian airfield and then that event slid from the news and more sensational news took its place…..

Behind the scenes there has been rumblings that the alleged attack was a lase flag….

False flag operations are covert operations conducted by governments, corporations, or other organizations, which are designed to deceive the public in such a way that the operations appear as if they are being carried out by other entities. The name is derived from the military concept of flying false colors; that is, flying the flag of a country other than one’s own. False flag operations are not limited to war and counter-insurgency operations, and have been used in peace-time; for example, during Italy’s strategy of tension.

Newsbud.com is reporting…..The Geopolitical Report, we look into the alleged gas attack used as a pretext to attack Syria. Despite a lack of evidence Syria had anything to do with the attack, the Trump administration and the propaganda media in the United States told the American people both Syria and Russia are responsible. From ambassador Nikki Haley’s theatrical performance before the United Nations Security Council to Russian President Vladimir Putin’s assertion the attack was a false flag, we examine different aspects and put them into the context of a previous sarin gas attack in Ghouta, Syria, an attack attributed to so-called rebel groups fighting to overthrow Syrian leader Bashar al-Assad and his government.

Could this be possible?

Two dozen former U.S. intelligence professionals are urging the American people to demand clear evidence that the Syrian government was behind the April 4 chemical incident before President Trump dives deeper into another war.

AN OPEN MEMORANDUM FOR THE AMERICAN PEOPLE

After reading several articles on this attack it has given me pause……NOW I want to know the “rest of the story”….would not be the first time the government has lied to get what they wanted…..

North Korea has been in the news and the country is speculating on the outcome of the US-North Korean mash-up…..but where did all this begin?

I have been asked “why do the North Koreans hate us so much?”

An excellent question and most of it stems from a situation 67 years ago……most call it the Korean War.  Most Americans know that the North attacked the South….the US was caught napping but regained the footing and took the battle to the North.

A war that began in 1950 and fought for several years until a standstill was achieved and a ceasefire was signed and the hostilities stopped by the hatred went on and on….

But they hate because of that war…….

It’s a question that has bewildered Americans again and again in the wake of 9/11, in reference to the Arab and Muslim worlds. These days, however, it’s a question increasingly asked about the reclusive North Koreans.

Let’s be clear: there is no doubt that the citizens of the Democratic People’s Republic of Korea (DPRK) both fear and loathe the United States. Paranoia, resentment and a crude anti-Americanism have been nurtured inside the Hermit Kingdom for decades. Children are taught to hate Americans in school while adults mark a “Struggle Against U.S. Imperialism Month” every year (it’s in June, in case you were wondering).

Source: Why Do North Koreans Hate Us? One Reason — They Remember the Korean War.

Of course, the hundreds of thousands of soldiers China sent to save its North Korean ally played a decisive role in that outcome, but the Korean People’s Army itself put up a formidable fight against the much more powerful United States and its allies. The KPA inflicted considerable casualties in a blitzkrieg-like assault through the south and quickly seized huge swaths of territory, compelling the United States to implement a scorched-earth policy that inflicted a tremendous death toll.

Source: The Korean War’s Brutality Turned the Stomachs of America’s Most Hardened Soldiers | War Is Boring

The war was stopped but the words of hostility never ceased……

I wish I could adequate explain to my readers the mental aspects of war….it takes a toll….but that is something that only a person that has experienced combat can know what I mean.  Anyone that says they feel the vets pain and was not part of the situation is LYING!

Some ghosts of the past are always there and waiting to invade the mind at any time.

That aside the American public has a different view of war and military action…..to most it is a video game for high score…..the public is woefully uninformed…..

A Morning Consult poll winks at me from my inbox: 57 percent of Americans support more airstrikes in Syria.

My eyeballs roll. Hopelessness permeates me, especially because I’m hardly surprised, but still . . . come on. This is nuts. The poll could be about the next move in a Call of Duty video game: 57 percent of Americans say destroy the zombies.

President Donald Trump has given the military the authority to reset a confusing system of troop limits in Iraq and Syria that critics said allowed the White House to micro-manage battlefield decisions and ultimately obscured the real number of U.S. forces.

The Pentagon, which confirmed the move on Wednesday, said no change has yet been made to U.S. troop limits. It also stressed the U.S. strategy in Iraq and Syria still was focused on backing local forces to fight Islamic State – a tactic that has averted the need for a major U.S. ground force.

Open end deployments of troops and still NO authorization from Congress…..something called for in the Constitution…..I am sure you have heard of this document (try reading it for a change)……

The American public needs to be more engaged than they are now……this laziness will be disastrous for our troops.