There are protests all over the country to raise the minimum wage……there has been a wealth of support for such an idea…..and there has been a wealth of opposition……but you know there are so many Americans that6 are living hand to mouth and still must seek entitlements from time to time……something has got t be done to help American citizens earn a living wage without sacrificing their family time……

Now this person weighs in on the necessity for a pay raise…..

Brave? Politically tone deaf? You pick: Democrat James Moran of Virginia says he and his fellow representatives in Congress are in dire need of a raise. “I think the American people should know that the members of Congress are underpaid,” Moran tells Roll Call. “I understand that it’s widely felt that they underperform, but the fact is that this is the board of directors for the largest economic entity in the world.” Moran noted that some members live out of their offices to avoid DC’s steep prices, even on salaries of $174,000.

“Our pay has been frozen for three years and we’re planning on freezing it a fourth year,” he says. “A lot of members can’t even afford to live decently in Washington.” He plans to introduce an amendment to remedy the problem, reports the Washington Post, but acknowledges it doesn’t have much of a chance. In the meantime, he’s opened himself up to shots like this from Wonkette: “Dude, you do know that if you were actually the board of directors for a ginormous company, approximately 9/10 of you would be fired for incompetence and the remainder of you would only be kept on as figureheads while a competent CEO and CFO did all the actual work, right?”

$174,000?  Not bad for a part time job……..I have always stated that the government should buy a complex like the Watergate and turn it into a dormitory for these toads……..they do not need their families in Washington….they spend about 126 days a year actually working…….

Oh yeah…this dude will definitely make it into Babbling Buffoons Of Babylon…….can you believe anyone would say such a crass thing?  Maybe a 2nd job is in order for this lazy pathetic twat……

Enough said?  Please weigh in on this piece of utter trash………

Americans, well sane Americans, are concerned that SCOTUS is doing more to harm our electoral system……we as a country need to find a way to put the process back into the hands of the people…or we can continue this path and lead us to ruin….your choice.

Want to cut the rich’s influence? Take away their money! – Salon.com.

I have waited for several days since the SCOTUS ruling on campaign financing……I wanted to see what the rest of the blogosphere would be yelling about…….but it seems that a plane with no facts and a mudslide and now another shooting has the media off in a different direction……those stories are so much easier to sensationalize than a court ruling….and the MSM is doing just that……go figure.

SCOTUS is getting close to the trifecta………it gave us the Citizens United ruling that basically gave corporations a voice in elections…..legally and now it has made another ruling about campaign financing……

The Supreme Court dealt yet another blow to campaign finance rules today, ruling that it is unconstitutional to cap the total amount a person could give to candidates, political parties, and PACs. Watergate-era laws have long constrained how much any one person could give; for the 2013-2014 cycle, for example, Congress had set the cap at $123,200, with no more than $48,600 going to individual candidates, the AP explains. But in a 5-4 decision, the court ruled that the rule violated the First Amendment.

The ruling does not strike down the limit on how much a person can give to any given candidate, only how much he can give overall. In his majority opinion, Chief Justice John Roberts argues that these overall limits don’t further the government’s interest in avoiding quid-pro-quo corruption, and hence can’t be regulated. Roberts’ opinion was only backed by three of his colleagues, according to SCOTUSBlog; Clarence Thomas voted with them, but wrote a separate opinion saying that he wanted to also overturn the landmark Buckley v. Valeo campaign finance case.

This Supreme Court is doing all it can to make elections up for sale…….it also is doing a lot to remove the individual from the process……..

It is scary to know that cash will be the deciding factor in any election………but what does it all really mean?

The Supreme Court today struck down longstanding rules capping the total money individuals can donate to politicians, parties, and certain PACs. What does it mean and who does it benefit? Here’s a taste of the reaction pouring in from pundits, advocates, and leaders:

There are many people that are saying that the republic is in serious trouble…..and thanx to SCOTUS I tend to agree…….can you say “oligarchy”?  WTF? 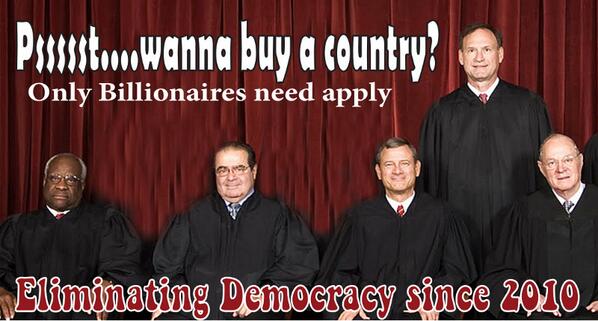 Oligarchy is a form of government in which all power is vested in a few persons or in a dominant class or clique; government by the few.
How much more will it take before SCOTUS destroys the country? 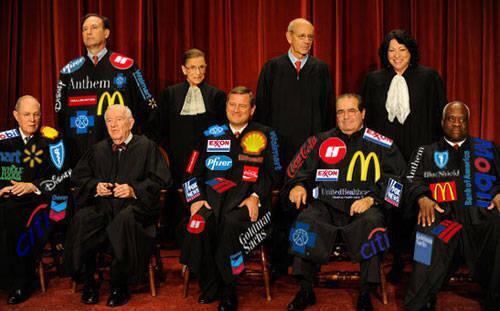 A great idea….but not just for SCOTUS….all politicians should wear their donors logo at all official gatherings……..
Will the trifecta be complete in June?  Weigh in, lease.

I took a wait and see attitude to Mr. Ryan’s new plan……wanted to see what was said in defense or opposition…….

We have had the prez budget and now Mr. Ryan has yet another one for us to worry about…..his idea is to cur $5.1 trillion from the budget in ten years……and of course it will fall on the backs of the poor and middle class to do all the sacrifice while corporations get an almost free ride on everything…….

Paul Ryan unveiled a Republican budget plan today that would slash $5.1 trillion in federal spending over the coming decade and balance the government’s books with wide-ranging cuts in programs like food stamps and government-paid health care for the poor and working class. About 40% of Ryan’s projected savings would come from the repeal of ObamaCare, reports the Wall Street Journal. Ryan’s budget claims balance by 2024, but relies on $74 billion in savings in that year from the macroeconomic effects of cutting deficits, which CBO says would have a long-term positive effect because it would free up savings and investment capital. Democrats are sure to seize on the maneuver as phony math; without these projections, however, Ryan’s budget plan would fall almost $70 billion short of balance.

The New York Times writes that Ryan’s plan “will serve more as a 2014 Republican campaign manifesto than a legislative agenda.” And the Washington Post says it “amounts to personal manifesto on government austerity from a man who has emerged as the GOP’s leading light on fiscal policy.” The Post also notes that Ryan wants to replace the outgoing Dave Camp as the next chair of the Ways and Means panel while still keeping his options open for a 2016 run for the White House. His complete budget blueprint is here via the Hill.

In his 2014 budget proposal, Ryan backed cuts to Medicaid and the Supplemental Nutritional Assistance Program (SNAP) – the program colloquially known as food stamps – and called for a repeal of the Affordable Care Act’s benefits. According to the CBPP, these cuts, which accounted for 72 percent of the budget’s total program cuts, would have “resulted in large increases in poverty and deprived many millions of affordable health insurance.”

Read the proposal and tell me if you think it is more for political campaigns than reality……..yes, this will be a manifesto for elections in November and most likely will also be used for the 2016 ones also……..

You think it sucks now….just wait for the results in 2014 and see how quick they start trying to implement these cuts……the election results will dictate their actions……..