Everyone knows the tale of the escape artist and drug king pin El Chapo…..but did you know that he was on trial here in the US?

After a Hollywood-esque trial and a week of jury deliberations, Mexicaconfiscatedn drug lord Joaquin “El Chapo” Guzman has been found guilty of all 10 counts and will get a mandatory life sentence, reports the New York Times. The first count essentially accused Guzman of being the mastermind of the Sinaloa cartel, and the others dealt with specifics such as drug trafficking. The first count alone came with a mandatory life sentence for the 61-year-old. Jurors heard testimony from nearly 60 witnesses during the three-month trial, which offered a rare glimpse into the brutal world of the cartels. One of the witnesses described how El Chapo personally tortured and murdered three men from rival cartels. (Read more El Chapo stories.)

Personally don’t care….but the story is that he will now have his assets confiscated….to the tune of $14 billion that is billion with a “B”……

My question is who gets those assets?

Mexico?  US?  Some other country?

Just who gets to blow through that $14 billion?

Personally I want representatives to speak the truth….but that is impossible in some cases in DC…..and thwe biggest one is criticism of AIPAC as Rep. Omar has learned….

Omar singled out AIPAC, one of the most influential lobbying groups in Washington, as the source of those donations.

Omar’s comments touched upon a long-running, and particularly ugly, thread of the anti-Semitic movement — that Jewish money fuels backing for Israel in the United States and elsewhere. A freshman Democrat, Max Rose of New York, said, “Congresswoman Omar’s statements are deeply hurtful to Jews, including myself.”

And the American-Israel Public Affairs Committee is a non-profit that doesn’t donate directly to candidates. AIPAC, however, does relentlessly push a pro-Israeli message on Capitol Hill and inside the executive branch, and its members donate to pro-Israel lawmakers and candidates while seeking to defeat those it considers a threat to U.S.-Israeli relations.

Omar has come under fire from House Minority Leader Kevin McCarthy (R-Calif.) and other Republicans over her comments criticizing Israel, both remarks made since her election to Congress and long before she even began her political career.

McCarthy and other Republicans have pressed Speaker Nancy Pelosi (Calif.) and top Democrats to “take action” against Omar and Tlaib, saying he would do so if the GOP were the majority party.

McCarthy added: “Anti-Semitic tropes have no place in the halls of Congress. It is dangerous for Democrat leadership to stay silent on this reckless language.”

He, slow McCarthy,  made my point for me….does he know what antisemitism actual is?  Apparently NOT!  And they trust this slug to count votes…..(insert raucous laughter)

Speaking truth is not antisemitism!

Does AIPAC spend a lot of money on Congress?  You bet your ass it does!

Please someone call these moron d/bags out on the lies they spread!

I pray these brave women continue to speak out and putting these old white a/holes in their place……Pelosi needs to grow a pair and step up to these women’s defense….and NOW!

After I wrote this draft news has come that she had issued an apology…..

Omar did tweet a statemement Monday saying, among other things, “I unequivocally apologize,” but she added that she stands behind her criticism of “the problematic role of lobbyists in our politics,” including AIPAC.

She did what the cowards of the DNC wanted….so it is DONE!

The mash up was nothing but a diversion…..but the truth that will not be said……the Dems are bought!

The MSM has shown exactly who controls their content especially on this issue.

Why did the media not fact check her statement for accuracy?

It would be too embarrassing when the truth came out…..that is why!

But let me introduce you to the Israeli Lobbying scheme…..

Electronic Intifada obtained and published the four-part series, but it did so during the week of the midterm elections, and the documentary did not get a lot of attention then.

In it, leaders of the pro-Israel lobby speak openly about how they use money to influence the political process, in ways so blunt that if the comments were made by critics, they’d be charged with anti-Semitism. 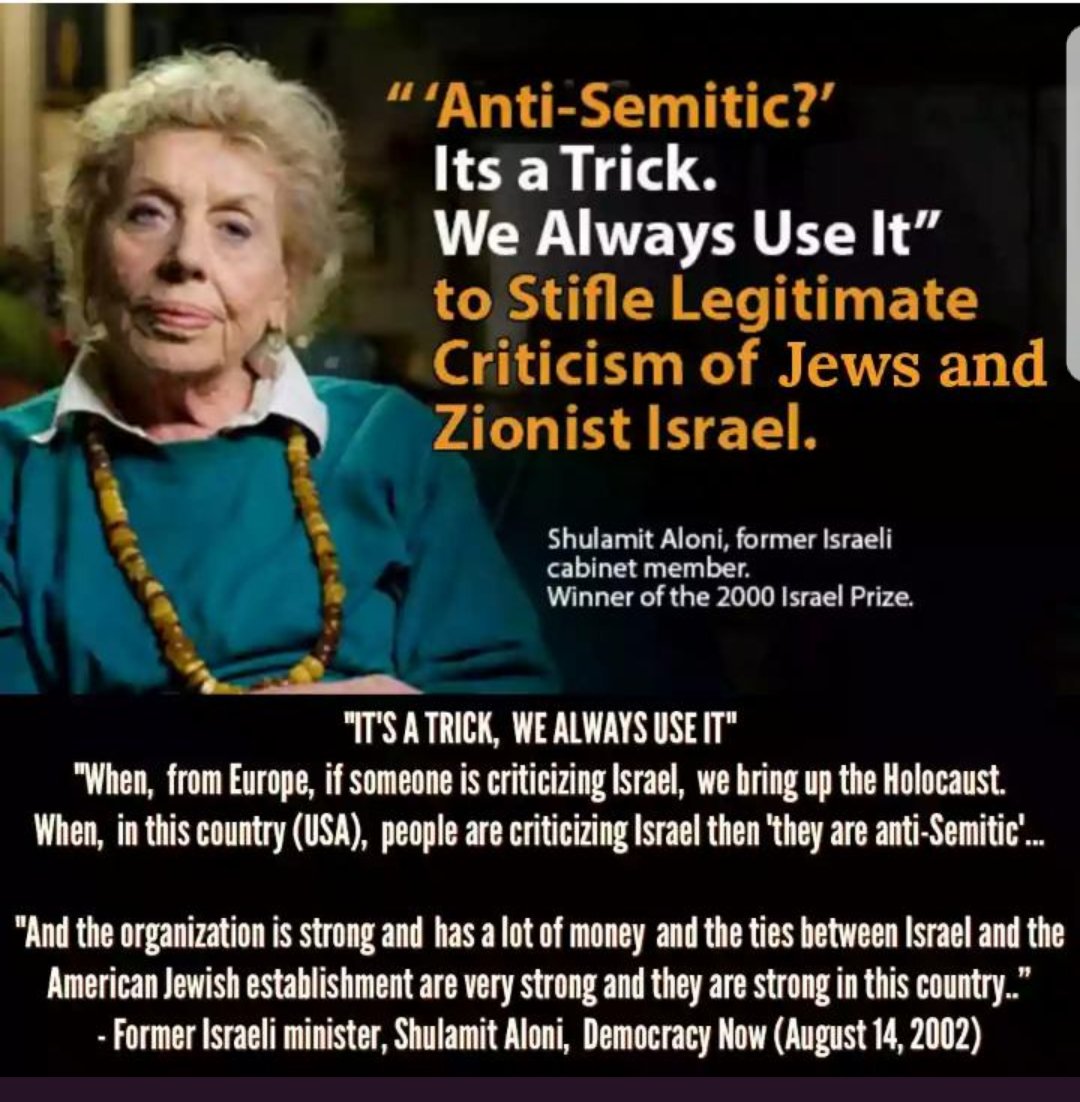 Meanwhile back to Venezuela.

The US is in the process of a regime change and the person they have chosen to do their bidding in the country is this dude name Guaido…….apparently corporate America likes this guy……

Donald Trump imagines Juan Guaidó is the rightful president of Venezuela. Mr. Guaidó, a man of impeccable illegitimacy, was exposed by Cohen and Blumenthal as “a product of a decade-long project overseen by Washington’s elite regime change trainers.” Argentinian sociologist Marco Teruggi described Guaidó in the same article as “a character that has been created for this circumstance” of regime change. Here, his constitutional credentials to be interim president of Venezuela are deconstructed.

Educated at George Washington University in DC, Guaidó was virtually unknown in his native Venezuela before being thrust on to the world stage in a rapidly unfolding series of events. In a poll conducted a little more than a week before Guaidó appointed himself president of the country, 81% of Venezuelans had never even heard of the 35-year-old.

This PUPPET will help with the rape of Venezuela by the US through neoliberal policies like extreme austerity……. It takes from the basic principles of neoclassical economics, suggesting that governments must limit subsidies, make reforms to tax laws in order to expand the tax base, reduce deficit spending, limit protectionism and open markets up to trade. It also seeks to abolish fixed exchange rates, back deregulation, permit private property and privatize businesses run by the state.

He will RAPE his country in the name of democracy….

The report confirms what The Grayzone previously reported.

“Juan Guaidó, recognized by Washington as the rightful leader, said he would sell state assets and invite private investment in the energy industry,” read the  Wall Street Journal’s January 31 article.

NOTHING the US is doing will make Venezuela a democracy……let the rape begin!

Will our “really smart person” president call the usurper in Venezuela Guido instead of Guaido?  Just wondering.

We had the longest government shutdown ever……then we had the usual recriminations back and forth….then the Congress trid to come together for a deal to fund the government…..and now we may have a deal…….

Congressional negotiators announced an agreement late Monday to prevent a government shutdown and finance construction of new barriers along the US-Mexico border, overcoming a late-stage hang-up over immigration enforcement issues that had threatened to scuttle the talks, the AP reports. Republicans were desperate to avoid another bruising shutdown. They tentatively agreed to far less money for President Trump’s border wall than the White House’s $5.7 billion wish list, settling for a figure of about $1.4 billion, according to a senior congressional aide. “We reached an agreement in principle,” said Senate Appropriations Committee Chairman Richard Shelby, an Alabama Republican, appearing with a bipartisan group of House and Senate lawmakers who concurred.

Details won’t be officially released until Tuesday, but the pact came in time to alleviate any threat of a second government shutdown this weekend. Shelby had earlier pulled the plug on the talks over Democratic demands to limit immigrant detentions by federal authorities, but Democrats yielded ground on that issue in a fresh round of talks on Monday. A House Democratic aide said Republicans had already agreed to funding cuts that would require ICE to ramp down the number of detention beds to a range of 34,000-38,500 by the end of the year. Asked if Trump would back the deal, Shelby said, “We believe from our dealings with them and the latitude they’ve given us, they will support it. We certainly hope so.”

All this good news depends on Trumpy Two Step…….he can pee on this parade at any minute on Twitter.

And the media waits to pounce!