Because of my field of interest I have been paying close attention to the rhetoric on foreign policy coming out of this crop of GOP candidates…..so far the only type of diplomacy that I have heard from their mouths is what use to be called “cowboy diplomacy”…..that means that they will lead with their gun…..

Unfortunately for them there is more to foreign policy than using whatever weapons you have stockpiled…..but so far I have heard nothing that would lead me to believe that any of the GOP candidates would be open to negotiations to solve international tensions…..

Chest thumping and misinformation does not give me any confidence that this country will ever be safe with them at the helm…….how about you?

During the most recent GOP debate, there appeared to be a contest between candidates over who could sound the most outraged by the Obama administration on foreign policy. These men are running against Hillary Clinton (and Barack Obama, at least in rhetoric) and to do so – and to pander to the most basic version […]

Source: What Kind of Diplomacy Do Hawks Want? – Antiwar.com Original by — Antiwar.com

I do enjoy the silliness of the season…..

I know it is early in the election cycle and everybody has their fave candidate…..but let’s get serious for a minute…..who do you think will be the GOP nominee in the summer of 2016?

The Donald?  How about Carson?  Maybe the dark horse of the day Jeb! will somehow pull it out?  And then there is the pretty boy, Rubio….does he look like a good candidate to beat Hillary?

Our boy Ted Cruz is gaining in popularity….at least in Iowa……but what is his chances for the end run?

Right now the GOP candidates are in a circular firing squad…..ambushing each other….how much will this hurt the party…..instead of some form of unity they have nothing but chaos…..with all that said….who will emerge as the eventual nominee?

Personally, I think it will be Cruz…..why?  He will grab Trump’s supporters when Donald crashes….Jeb! is just too boring even for GOP voters and Rubio may drown before the convention in Cleveland (I have a thought about the convention also and will share it a little later)……

If you’re still picking your jaw up off the floor after Ted Cruz unceremoniously dumped Donald Trump in the Iowa polls, well, you can put it back down on the floor. The fact is, Cruz “is the guy who looks best positioned to win” the GOP nomination, writes Chris Cillizza in the Washington Post. “Yes, you heard that right.” He goes on to list the reasons Cruz “has the most direct route” to the nomination, including the fact that he’s the most conservative candidate, he’s raised more money than anyone other than Jeb Bush on the Republican side, and he’s looking good in many of the early primary states, not just Iowa.

“Cruz has begun his ascent up the early state and national polls at just about the right time,” Cillizza writes. “His campaign is perfectly positioned to make him the last man standing. Believe it.” But over at Salon, Bob Cesca scoffs at the whole idea: Cillizza and others predicting Cruz’s nomination suffer from a “tragically short attention span,” he writes. Cruz is just another “flavor of the month,” like Ben Carson and Carly Fiorina, and besides, Iowa is no bellwether. “It’s difficult to see any other Republican gaining enough momentum this close to the primaries to usurp Trump,” he writes. “And one poll in Iowa isn’t nearly enough for Ted Cruz.” Read Cillizza’s full column here, and Cesca’s here.

His only problem (for now) is Trump’s babble about where he was born…..this is good for Trump with all the fear generated over the immigrants…..this is a selling point and could well lead to a downfall for Cruz……

There is the prediction you have been waiting for…..and I reserve the right to quickly change my mind (LOL)……

Since today looks to be my day to report and wrote on events surrounding our war on ISIS….I thought I would report on some good news…..better news than we normally get out of the battle against the “dogs of war”……that is……

The good news is that it appears that the fighters of ISIS are having their pay cut by the command structure of ISIS…….

Islamic State militants have seen their monthly salaries cut in half down to $400 for foreign fighters and $200 for those in Syria, according to leaked documents out of Raqqa. The internal government documents were released in November or December, reports Time. “Because of the exceptional circumstances that the Islamic State is passing through, a decision was taken to cut the salaries of the mujahedeen in half,” they read, per the Guardian. “No one will be exempt from this decision no matter his position, but the distribution of food assistance will continue twice a month as usual.”

The group doesn’t explain the “exceptional circumstances,” but experts cite bombing campaigns targeting the group’s oil business. Low oil prices may also be a factor. According to the State Department, ISIS now brings in just a fraction of the $40 million a month it made from oil early last year, reports CNN. The slashed wages are still above or level with the minimum wage for public sector employees in Syria, who were paid between $176 and $266 a month in 2011. Experts believe the healthy wages were key for the caliphate’s recruiting purposes. ISIS fighters also received a $50 stipend for wives and $25 for each child.

If all this is true then the plan to attack the finances of ISIS and destroying their income stream may be showing some much needed good results…..

This could also put a damper on their (ISIS) recruiting…….the fighters may be fanatics but they still want their pay and any cuts could prove to be a bummer for their recruitment drives…….

Like I said before….if true….then we have finally got some good news for all the efforts to thwart ISIS……we will just have to wait and see if this does have positive results…..

I must leave my readers with those thoughts…..for now I must go and face those eager young minds….back later my friends…….

Before I begin…..the big news of the day is that there is a large snowstorm heading for the East Coast…..before you break into a panic…..let me say one thing…..It is WINTER you dummy!  Get over it!

I recall the early days….by that I mean last year or so…..when the Dems were making nice with each other…..the two leaders said that they would not run a negative campaign…..a fine gesture……

Hillary has been in the lead with the exception of New Hampshire and she was polite and well…..nice.

But that has changed……she is not doing well in New Hampshire and now she is behind in Iowa…….

Things have gone “from bad to nightmare” for Hillary Clinton thanks to a new CNN/WMUR poll out of New Hampshire, per the Washington Post. The poll—which quizzed 927 of the state’s likely Democrats from Jan. 13 to 18—shows Bernie Sanders has expanded a solid lead in early December by 10 points to an insane 27-point lead with a 4.8-point margin of error. Another good sign for Sanders: About 52% of voters say they’ve decided who will get their vote in the primary. The only downside for the Vermont senator is that his support “rests heavily on groups whose participation in New Hampshire primaries is less reliable—notably younger voters and those who aren’t registered Democrats,” reports CNN.

Clinton trails by 45 points among undeclared voters, but just nine points among registered Democrats, though she led Sanders by 7 points in the latter category in December. Sanders is also enjoying a 91% favorability rating—”which is basically where Michael Jordan’s favorability ratings would have been in Chicago in 1993,” quips the Post. Clinton—who was described by 55% of respondents as the “least honest” Democratic candidate—sits at 65%. However, Clinton does show an advantage nationally with minorities and voters over 50, per Time. She leads Sanders by 15 points among Democrats and Democratic-leaning voters in a Monmouth University poll released Tuesday, with a 5.2% margin of error.

All the nice sentiments are eroding away……now that Hil is losing to Bernie the gloves have come off…..she and her surrogates are playing the one card I have been waiting for…..the socialist card.

The GOP has been nothing but negativity I expected better from the Dems…..but after thinking back to the 2008 primaries I realized that she does that when she feels her grasp of eventual power slipping….

Recently Bernie made a statement about Hillary as part of the “establishment” and their money……she immediately took offense and used Planned Parenthood as an example of the “establishment”……but I hate to pee on her parade but her examples are shoving money at her in the thousands and probably millions…..

She will do what she needs to do to destroy her competition….that includes lame name calling and the fear tactic……the GOP should be proud of her tactics…..

I may be a Bernie supporter….but they all have a “group think” mentality…..basically they are ALL on the same page on many issues……

I am not pleased that the Dems are all on the same page when it comes to foreign policy…….but then  expected nothing different…….

In about a week the 2016 election primaries will officially begin…..

Do you truly understand the primary system?  The logical answer would be yes after all we are Americans…..but that would be delusional……if you are not part of the MSM then you will find it tedious and too damn long….. 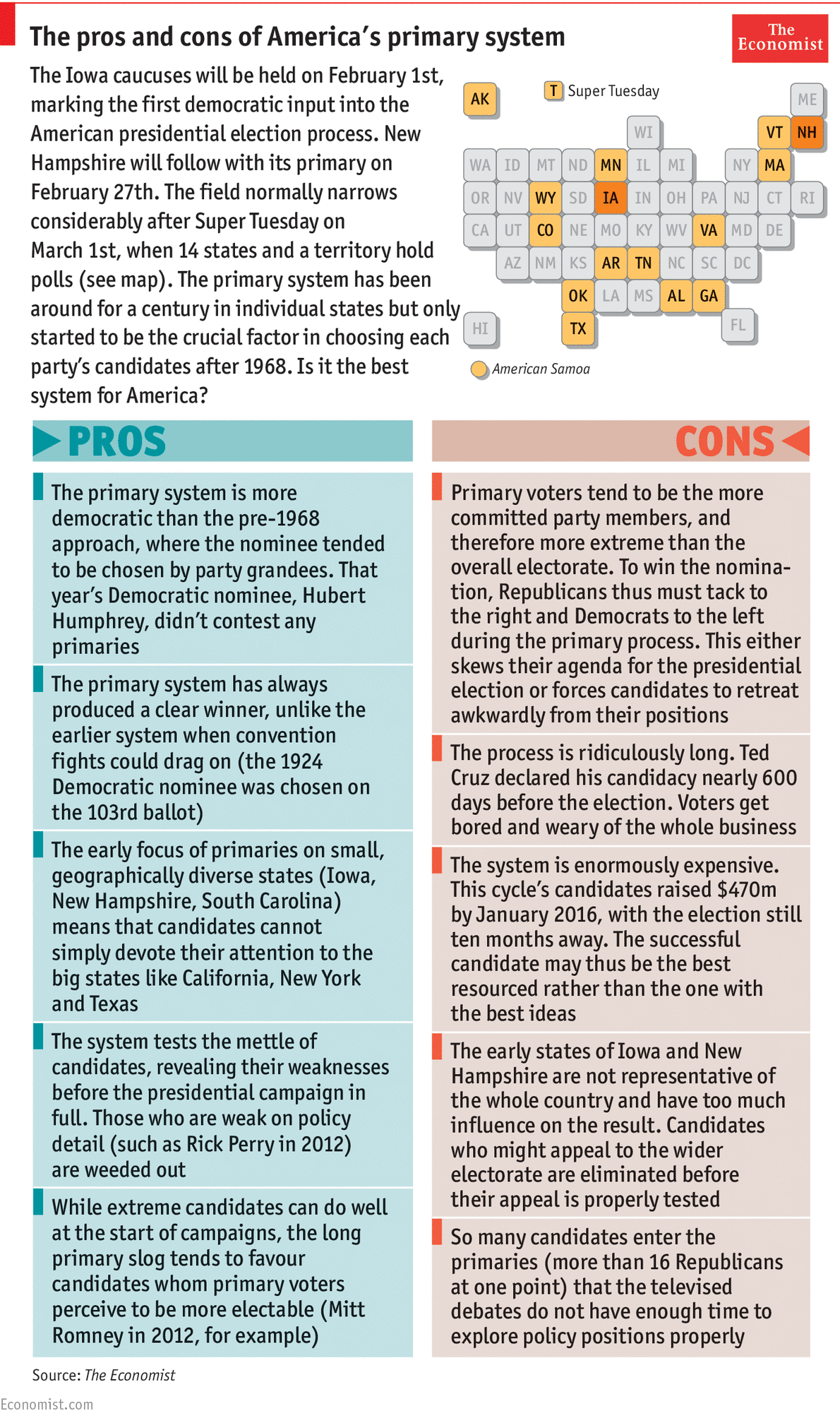 Personally, if we must have these primaries then we should have a national holiday and all the primaries held on that day…..would eliminate one state having the benefit of being first and all primaries would carry the same weight…..

I would like to hear your thoughts on the primaries…….please let’m fly!