The Killing Of A Princess!

Remember the years after the death of Princess Di?  There was conspiracy after conspiracy about the cause of her death…everything from she was pregnant with another man’s baby to revenge for the divorce to a simple hit by Brit intel…..

Well if you thought those days were gone…..think again…..

An 80-year-old retired MI5 agent, John Hopkins, has made a series of astonishing confessions since he was released from hospital in London on Wednesday and told he has weeks to live. Hopkins claims to have been involved in 23 assassinations for the British intelligence agency between 1973 and 1999, including Princess Diana.

Is this just another of those looking for a few  moments of fame?

Will we ever know the truth?

Not in this lifetime…..but then all this speculation only one thing is constant….SHE IS STILL DEAD!

Time to say adieu until the morrow…..have a day and get some smiles in….chuq

Recently the Russians claimed to have killed the ISIS leader al-Baghdadi….I wrote about the news piece ……

Source: Death Of A Bad Man – In Saner Thought

I bring this up because the US has issued a report that says they have killed the “Grand Mufti” religious leader of ISIS…..

US Central Command (CENTCOM) confirmed today that the Islamic State’s Turki al-Bin’ali was killed in a May 31 airstrike in Mayadin, Syria.

Mayadin, which is in the eastern Syrian province of Deir Ezzor, has become a hub for the so-called caliphate’s senior personnel. The US has targeted several high-profile figures in or near the city this year.

Now this could be good news….but the US has killed “leaders” before…one guy in Afghanistan he was killed at least 3 separate times….

If true this could be good news…take out the radicalizing force of the group….but this does not eliminate the group….just one of the “soldiers”.

Since both were supposedly in Syria, around Raqqa, could one be mistaken for the other…..

Just who is dead at this point?

More news from the ISIS front…..

It seems that ISIS is admitting that they are doomed….one of their last acts of violence in the Iraqi city of Mosul was barbaric and unnecessary….

In what American commanders called a crime against the people of Iraq and the country’s prime minister called an admission of defeat, officials say ISIS fighters blew up Mosul’s most iconic mosque Wednesday night as government troops closed in. The Grand al-Nuri Mosque, more than 800 years old, was where ISIS leader Abu Bakr al-Baghdadi declared a caliphate in 2014 during his only public appearance, the BBC reports. ISIS—whose fighters had been seen bringing explosives to the site, according to CNN—claimed the mosque in Mosul’s Old City had been destroyed by American aircraft, but US commanders swiftly denied the claim, saying there had been no strikes in the area.

Aerial photos showed little but rubble remaining at the mosque complex, where the black flag of ISIS had flown since 2014. The destruction of the mosque and its famous minaret “amounts to an official acknowledgement of defeat,” Iraqi prime minister Haider al-Abadi said in a statement. The Old City is the only part of Mosul still held by ISIS and commanders say the “final chapter” of the offensive to retake the city has begun. The Iraqi military says elite counterterrorism units had fought their way to within 170 feet of the mosque when it was destroyed, Reuters reports.

Why?  What purpose did this serve?

More thoughts on the destruction of this magnificent mosque….. 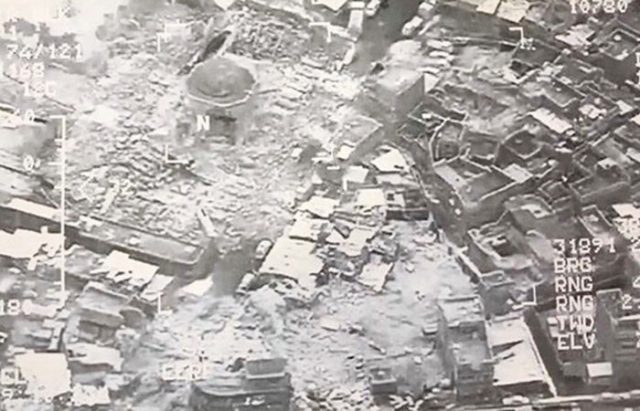 Not many people here in the US care much what is happening in Qatar….right now they are worried about the special election in the 6th District of Georgia or some other major deal that the media is fixated on at this time…..

But if you are a military family you might want to keep an eye on the situation on the Persian Gulf region….what happens there could effect your family in a numerous of ways.

It began as a squabble between Arab allies, but the standoff between Qatar and its neighbours is threatening to engulf the Horn of Africa. When Saudi Arabia, the United Arab Emirates, Egypt, Bahrain, Yemen and the Maldives declared at the beginning of June that they were severing diplomatic relations with Qatar it appeared to be of interest mainly to the Arabian Peninsula – and the Gulf in particular.

The Saudis and their allies accused Qatar of backing international terrorism. The US, which has the Al Udeid air base in Qatar, looked askance, but did little more than use its good offices to try to ensure that the war of words did not flare into an open conflict.

Source: Africa: Qatar’s Conflict With Its Neighbours Can Easily Set the Horn of Africa Alight – allAfrica.com

The Middle East is not a stable region no matter what the press wants you to believe….okay it has seldom been very stable but that is neither here nor there….the crisis with the Saudis and Qatar could prove to be a destabilizing force for the region…..

The Qatar-Gulf rift isn’t about fabricated statements or a hacked website, but a battle to control regional order after the Arab uprisings. But will the Gulf destroy itself in the process?

A heavy tension has prevailed over the Gulf since 23 May.

It all appeared to start with the publication of statements attributed to Qatar’s Emir, Sheikh Tamim bin Hamad Al-Thani, which were quickly proven to be fabricated. The Qatari News Agency website, it turned out, had been hacked.

Although hacking any country’s official news agency is clearly problematic, the bigger issue is the way in which two Arab Gulf states handled the fabricated statements.

Like I said…..the admin in power needs to keep this in their sights and work for a calm and equitable termination of the “hostilities”……

Military families should be the first and the loudest to demand such.

After this draft was written more news came to light……seems the State Department is NOT on board with this Qatar bashing anymore…..

The US stance on Saudi Arabia and its allies’ hostility toward Qatar, including an outright blockade, has not been particularly consistent in the last couple of weeks. State Department spokeswoman Heather Nauert took a more direct position against the blockade today, but that is just raising more questions.

Nauert very directly faulted the Saudis for their move against Qatar, noting neither they nor other nations involved have offered any details to back up their allegations, and suggesting that the blockade was not about Qatar’s alleged support for terrorism, but long-standing grievances among GCC countries.

This is largely in keeping with what you’d figure would be the US position on Qatar, a long-time ally, but runs contrary to President Trump, who personally took credit for the Saudi-led move and has repeatedly parroted Saudi allegations against the Qatari government since then.

Why has this region gotten more unstable since the Trump visit?

No one seems to have a handle on why the Saudis pulled this end run…..in other words…what is the real cause of the situation….

Officially, the narrative on the split among Gulf Arab nations, between Saudi Arabia and the tiny nation of Qatar, has centered around support for terrorism. The reality of the situation is far more nuanced, but that hasn’t stopped President Trump from immediately embracing the Saudi position, attacking the Qatari government for supporting “extremism” in the region.

Yet when we dig deeper into the details underpinning the split between the Saudis and Qatar, we find that the actual rift stems heavily from the Arab Spring, and the Qatari government’s support, both official and unofficial, for groups advocating democratic reform in the Middle East. While the Saudis and the other nations involved in directly in this split are more than comfortable to be overtly hostile to democracy in the Middle East, it is wildly dangerous for the United States to position itself in such a manner.

Source: The Real Reason behind Qatar’s Gulf State Freeze Out | The American Conservative

This situation is fascinating……all the intrigue of a “Game of Thrones”…..how will it end?

For months now, ever since the 2016 election, we have been told daily about the historic Russian attack on American democracy….they allegedly hacked into the election process, the DNC and other entities.

The MSM makes it seem as if this is all new for Russia to try and influence our democratic process……wrong!

Over the last nine months, headlines have reverberated with questions regarding the Russian role in “hacking” the American electoral process. On January 5, 2017, James Clapper, then Director of National Intelligence, told the Senate Armed Services Committee that, “The Russians have a long history of interfering in elections. Theirs and other peoples…This goes back to the 60s, from the heyday of the Cold War.” He went on to call Russian interference in the 2016 election “unprecedented.” In some respects — the scale and impact of the accusations — they are. In other ways, however, they are a throwback to an 80-year-old saga.

The role of Russia’s intelligence services in the 2016 election represents the revival of Soviet efforts that predate even the Cold War. “Fake news” and financial assistance to opposition candidates, two measures that define Russian influence operations targeting the West, both date to the Stalinist period and the rise of the Soviet foreign intelligence apparatus. In the 1930s, when these methods were first unleashed, the United States had almost no counterintelligence capabilities. Until the early Cold War, the Soviets proved reasonably adept at influencing American politics towards Russia and acquiring information. Only with the expansion of the FBI and the reorganization of the House Un-American Activities Committee (HUAC) did Soviet efforts at directly influencing American elections dwindle.

It is a “New” occurrence only if you do not know history…and now you do.

After the last shooting, the one that claimed a Congressman (since there are so many I wanted to clarify which shooting) there has been much written about the aftermath…all the hate filled post and Tweets.

Rabid conservs attack libs as the cause of the horrible attack and then it is the Libs turn to attack conservs and along the same lines…..all in all it is hate speech disguised as “news”.

That leads us to the debate on “free speech”.

I have tried to take on this topic in the past…..

I recently read a piece of this subject written by a law professor……..

Since its inception as America’s founding political document, there have been 27 amendments to the United States Constitution. Even the most adept scholars can rarely name and define each one. Many amendments are obscure and deal with legal nuances like changes in representation and how to handle US citizens who come into a foreign title of nobility. While these constitutional adjustments rarely get public attention, the First Amendment continues to spark controversy across a wide swath of the US population. What is free speech? What does the Constitution protect? What is the difference between hate speech and free speech? With the recent attention on the safe space movement on college campuses, it’s increasingly important to understand the legal parameters of the First Amendment.

The wording of the First Amendment is relatively straightforward. At the core, Americans receive protections to exercise their religious beliefs freely, with specific prohibitions against the government passing laws to restrict religious practice. In addition, free speech is protected as well as a free press, with no restriction on citizens assembling peaceably. The confusion comes when people don’t understand what each of those things means, or when broader interpretations are applied to legal definitions that are, in reality, more narrow.

We could solve this problem with a little civility toward each other and refuse to repeat words from the haters (people that live to hate)……there is no dishonor in being civil with each other.