Remember during the 2016 election and the chants of “Build the wall” coming from the mindless drones of the Trump camp?  And of course that Mexico would pay for it (this has nothing to do with the post but if does help the word count)…

This is Trump’s, Our Dear Leader, answer to stopping the flow of immigrants into the US.  Does everyone remember this?

It seems he is a “One Trick Pony” on the control of immigrants….he gave a Spanish minister some advice…..

Spain’s foreign minister says President Trump offered the Spanish government some very Trumpian advice on dealing with an influx of cross-Mediterranean migrants. Josep Borrell says the president suggested building a wall across the Sahara desert, even though only two small enclaves in the region are Spanish territory, the Telegraph. Borrell, who accompanied Spanish royals to the White House in June, told an event in Madrid this week that when skeptical Spanish diplomats pointed out that such a wall would have to be more than 3,000 miles long, Trump said, incorrectly: “The Sahara border can’t be bigger than our border with Mexico.” A ministry spokesman tells the Guardian: “We can confirm that’s what the minister said, but we won’t be making any further comment on the minister’s remarks.”

Since most of the immigrants  originate south of the desert and make their way north to try and find passage to Europe.

The map below shows the extent of the Sahara and to build a wall across the Southern limits of the desert is just a pipe dream…..nay it is a fucking joke from a comedian that has NO idea about the geography of the region. 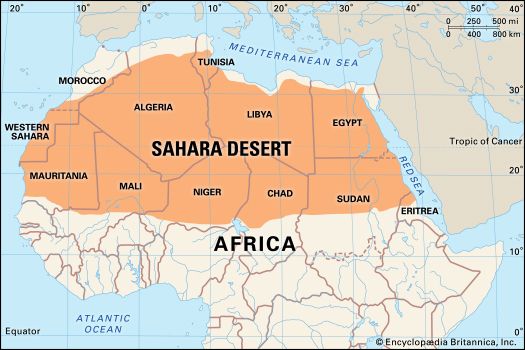 Another wind bag GOPer that has NO idea of geography and thinks slogans will solve a problem.