The UK is in the middle of the celebration of the queen’s 70th year of rule over Britannia…..and they are all sorts of things going on for the celebration books, coaster, and then there is just tacky….. 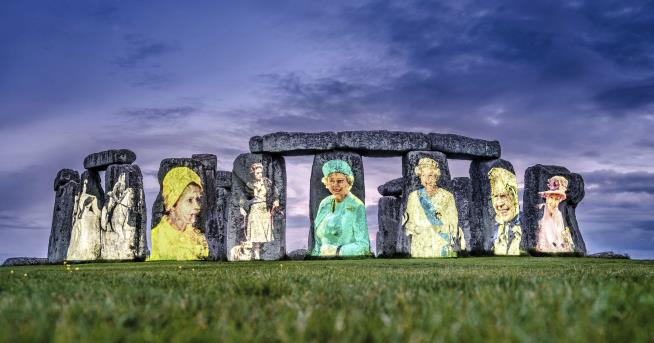 Whoever the designers of Stonehenge were, it’s probably a decent bet that they didn’t have this week’s use of their monument in mind: Visitors this week will see photos of Queen Elizabeth II splashed across the front of the sarsens on Salisbury Plain, a tribute to the monarch ahead of the Platinum Jubilee marking her 70 years on the throne, reports USA Today. The eight images represent the queen throughout various decades during her reign, from her coronation ceremony in 1953—she officially ascended to the throne in February 1952, after the death of her father, King George VI—up to a more recent depiction of her attending the Royal Windsor Horse Show.

“We’ve brought two British icons together,” English Heritage, the group that oversees the landmark, tweeted on Monday. The group added in a statement, per UPI: “We wanted to show different aspects of the Queen—of her personality, of her interests, and really show what a special lady she is.” Six Elizabeth images were also projected Monday onto London’s Marble Arch to celebrate England’s longest-reigning monarch ever. The Platinum Jubilee runs Thursday through Sunday, with a star-studded concert planned for Saturday and the wrap-up pageant in front of Buckingham Palace on the final day.

Not everyone in the British Commonwealth is in a Jubilee mood, however. The AP reports on the “apathy” and protests that have emerged as the celebration gets ready to kick off, with the former spurred mainly by the country’s colonizing past. “It’s not about her,” one Jamaican academic tells the news agency. “It’s about her family’s wealth, built on the backs of our ancestors. We’re grappling with the legacies of a past that has been very painful.” More on that here.

What part of this is in good taste?

Turning a historical landmark that has stood for a 1000 years into a billboard to celebrate the queen’s long rule.

8 thoughts on “This Is Just Tacky!”