Skip to content
lobotero in News, Observations 2 May 2020 979 Words

Lots of news but most of it is around the pandemic….so IST will find something else to report on….

First, the businesses have been struggling because of the Pandemic and strip clubs are no different…..drive thru is the way to survive for so many businesses…..eateries, funeral homes, churches and now strip clubs………

Customers slowly drive through a tent that contains four dancers and a DJ. The first 50 cars get a free roll of toilet paper.

“You pull in and you get one or two songs with the gogos, then we bring your food out to you and then you go on your way,” explained Lucky Devil Lounge owner Shon Boulden in a video report uploaded by The Oregonian.

Then there are those bastards that are profiting from this pandemic…..lawmakers for instance…..

A new analysis of financial disclosure documents found that Republican and Democratic members of Congress made nearly 1,500 stock transactions worth up to $158 million between February and April as the coronavirus spread across the U.S., heightening suspicions that elected officials in charge of the federal response to the pandemic have opportunistically cashed in on it.

The Campaign Legal Center (CLC), a non-partisan watchdog group, uncovered at least 127 purchases or sales in securities by senators and at least 1,358 transactions by members of the House between February 2 and April 8.

A robot gorilla has recorded gorillas singing and farting…..

Mountain gorillas have been caught on camera as they “sing” during their supper, a behavior that has never before been documented on video. Filmmakers captured the astonishing footage of the primate crooners with a little help from a very special camera: a robotic “spy” designed to look like a young gorilla.

The singing apes make their television debut on April 29 in the returning PBS series, “Nature: Spy in the Wild 2.” Like its predecessor, which first aired in 2017, the program documents remarkable up-close glimpses of elusive wildlife behavior, seen through the “eyes” of robots that are uncanny lookalikes of the creatures that they film

Okay that is a recording I would like to hear.

It has been announced that our dear president, Trump,  has plans for the Moon…..(same as those of the Obama admin)…..

President Trump issued an executive order last month allowing US companies to mine the moon, but—is this really possible? Sure enough, Popular Mechanics lays out enough of the science, current projects, and history of moon-mining enthusiasm to make it seem real. “We’ve just been moving in a circle for a long time,” says George Sowers, a space-mining researcher. The story goes back at least to the Outer Space Treaty of 1967, which allowed for off-world commercialization but not sovereignty; the Obama administration updated it in 2015 to let Americans own and sell anything gathered off the planet. The moon’s bounty includes an apparently healthy supply of oxygen and hydrogen, “the most efficient chemical propellants known,” says Sowers. “You have rocket fuel.”

That could turn the moon into an outpost for colonizing Mars, if miners harvest enough water from the lunar ice lurking in deep craters. But how to properly heat up that ice? Ideas range from mirrors to nuclear-powered thermal mining—and yes, there are small uranium reactors that could go to the moon—or, as a baby step, sifting the ice in shallow craters, which would extract fewer resources at lower cost. On the plus side, NASA is sending up small, exploratory rover missions to cull samples and map the moon’s water resources. But it’s not all rosy: The Guardian reported last year that some scientists are worried we’ll mine moons and planets before Earth enters a crisis phase in which it lacks needed resources. “Once you’ve exploited the solar system, there’s nowhere left to go,” says an astrophysicist.

NASA is stating that his plan is beginning to feel real….

NASA had good news for Jeff Bezos and Elon Musk but bad news for Boeing Thursday. Bezos’ Blue Origin company and Musk’s SpaceX have been selected, along with Alabama-based Dynetics, to develop spacecraft that can land people on the moon, the BBC reports. Under contracts totaling just under $1 billion, the companies will submit competing designs for moon landers. Boeing, which usually plays a key role in NASA spacecraft programs, also submitted a bid but was not selected, reports the Washington Post. NASA says its engineers will work with the companies on their designs; they should be able to choose by next February which lander will bring people to the moon for the first time since 1972.

NASA Administrator Jim Bridenstine tells the Post that the Artemis mission is “starting to feel very, very real” and he is confident that the agency can meet President Trump’s goal of bringing people to the moon by the close of 2024. The project was behind schedule and over budget even before the pandemic, but Bridenstine told reporters Thursday that he was confident Congress would approve funding despite the huge amounts being spent on coronavirus relief, the New York Times reports. “It’s important that this agency do this now, because our country and in fact the whole world has been shaken by this coronavirus pandemic,” he said. “And yet we need to give people hope. We need to give them something that they can look up to, dream about.”

You would think that the head of NASA would be aware of the treaty about the use of outer space….a treaty the US has signed…..

Then there is that doctored photo of the fools standing guard outside the state capital….. 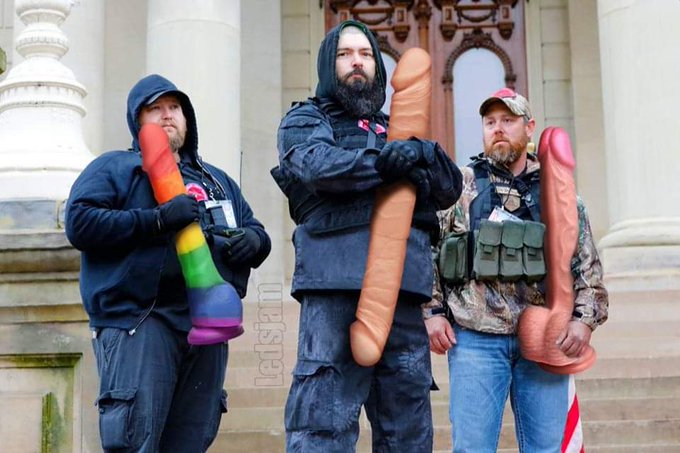